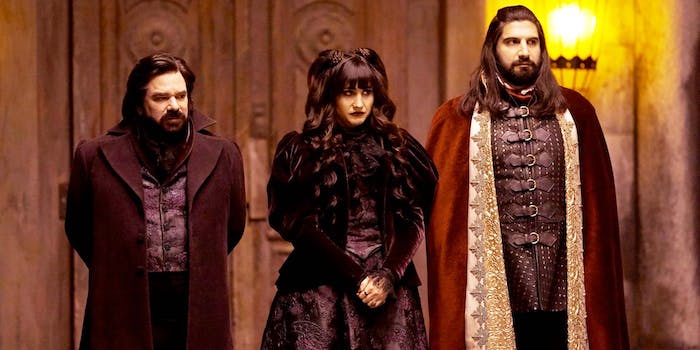 The best comedy series on Hulu

Comedy? Hulu's got it, and this list of best comedy shows is proof.

The best comedy series on Hulu

What We Do in the Shadows

What We Do in the Shadows, a sitcom based on the 2014 Taika Waititi film, follows the lives of a small coven of vampires living in Staten Island. Relentless and powerful Nandor, noble and absent-minded Lazlo and his wife Nadja, and their familiar, Guillermo, rule the night…sort of. Come for the bloodsucking humor, stay for regular human bartender Jackie Daytona.

Adult Swim has built a fiercely loyal audience over the years by becoming a repository for dark, adult comedic cartoons. Rick and Morty represents the pinnacle of what an Adult Swim show can be. Created by Dan Harmon and Justin Roiland, the series follows a young boy and his mad scientist grandfather through a series of interdimensional adventures that bring chaos to every living creature in the multiverse. Pitch black comedy is rarely sentimental, but Rick and Morty regularly manage to pull genuinely moving moments from even the darkest of scenarios. Seasons 1 through 3 are currently streaming on Hulu.

This award-winning single-camera sitcom stars Anthony Anderson and Tracee Ellis Ross as upper-middle-class parents who begin to question if their lifestyle is getting in the way of their children’s cultural identity. Sitcoms that tackle issues can easily see their plots overwhelmed with preaching, but Black-ish handles the complicated racial world of modern America with comedic grace and occasionally righteous anger. Politically closer to All in the Family than The Cosby Show, Black-ish is thoughtful without ever forgetting to be funny.

The “pandemonium of the universe” simply can’t be understood, but being in love certainly helps. This is one of the many lessons Eleanor Shellstrop learns after stumbling into what she thought was “The Good Place.” Spoiler: It wasn’t. Michael, an afterlife architect with a demonic bend, sought to torture Shellstrop and her friends for thousands of years in a hell he constructed just for them. And despite winning him over during the course of three seasons, the rules of the hereafter make the DMV look as efficient as a Volkswagen factory.

Putting a live sketch comedy show like Saturday Night Live is always a hectic production. Whether we’re talking the neurotic writers and producers behind the scenes, or the narcissistic performers in front of the camera, just about every angle in putting on a worthy show is ripe for comedic situations. 30 Rock follows Liz Lemon, a classic heroine trying to have it all. In her case, that involves a stable career in show business, a boyfriend who isn’t bogged down with issues, and even a baby of her own. Her unlikely ally and occasional foible is her boss, mentor, and NBC executive of East Coast Television and Microwave Programming, Jack Donaghy. Underneath his black-tie 1% alpha-male veneer lies a sensitive confidant with more heart than a Golden Girls rerun.

The Mindy Project follows obstetrician/gynecologist Mindy Lahiri as she tries to balance her personal and professional life, surrounded by quirky co-workers in a small medical practice in New York City. Despite being canceled by Fox after three seasons, the Mindy Kaling comedy series was eventually resurrected by Hulu, where the series went on to run three more seasons. All six seasons are currently available to stream on Hulu.

From the mind of writer and executive producer Stephen Falk, You’re The Worst puts a dark twist on the romantic comedy genre. Narcissistic, brash, and self-destructive Jimmy Shive-Overly (Chris Geere) thinks all relationships are doomed. Meanwhile the cynical, people-pleasing, and stubborn Gretchen Cutler (Aya Cash) knows that relationships aren’t for her. So when they meet at a wedding, it’s only natural that the two of them go home together and, despite their better judgment, begin to find themselves falling for each other. Rounding out the cast is Desmin Borges, who plays Edgar Quintero, Jimmy’s once homeless, war veteran roommate; and Kether Donohue as Lindsay Jillian, Gretchen’s best friend and former partner in crime.

It’s truly surprising that “The Gang” from It’s Always Sunny in Philadelphia is 1) still alive; 2) not incarcerated, and 3) still going strong. And despite the fact that the show is 14 seasons strong, it’s still one of TV’s most hilarious comedies, constantly pushing the bar and earning its long-time moniker of “Seinfeld on crack.” The series was recently picked up by FXX for a 15th season, which will make it the longest-running live-action comedy series in American television history.

No show in modern broadcast history has done more to elevate crappy selfish people than Seinfeld, and for that, we owe NBC a debt of gratitude. The famous “show about nothing” has stood the test of time, remaining brutally funny nearly 20 years after its last episode aired. Seinfeld’s singular focus on the awful, awkward reality of everyday interactions gives it a timeless quality that sitcoms rarely get to experience. Hulu is the only place you can watch Seinfeld online. Whether you seek to be the master of your domain or find out what pisses off the Soup Nazi, Seinfeld is there to serve up absurd laughs 21 minutes at a time.

This FX comedy co-created by and starring Zach Galifianakis follows Chip Baskets, who wants to follow his dream of being a French clown. However, reality keeps interfering. Saddled with financial difficulties and facing an impenetrable language barrier, he moves back home to Bakersfield with high hopes. There, he is forced to confront his past while working as a rodeo clown and competing with his siblings for the approval and affection of his mother Christine—played by Louie Anderson, in an Emmy-winning role.

Series creator Ramy Youssef offers a thoughtful and earnest look at the Muslim-American experience with Ramy, which centers on a hip New York millennial struggling with his Muslim faith in the age of the Muslim ban. When Ramy is free to focus on Muslim identity, it feels fresh, almost revolutionary—as both a millennial’s exploration of how deep his Muslim faith runs and a look at the trials and tribulations of a young man who has decided it is time for him to meet “the one.”

They say fashion trends run on a 20-year cycle, which means we’re perilously close to seeing a full-scale revival of frosted lip gloss, bedazzled bootcut jeans, and tattoo choker necklaces. Consider Hulu’s middle school cringe comedy, Pen15, a bold first step in that direction. The 10-episode series (co-produced by The Lonely Island and AwesomenessTV) stars Maya Erskine and Anna Konkle playing 13-year-old versions of themselves in the year 2000, as the two BFFs navigate the trials and tribulations of seventh grade. To say it’s as awkward as you expect would be disingenuous. It’s much, much worse—but, also, in the best way possible?

One of the first Hulu Originals to delve into comedy, Difficult People comes to us from the mind of Julie Klausner, who stars alongside Emmy-nominated Billy on the Street host Billy Eichner. They play best friends living in New York City, displaying irreverent, celebrity-obsessed behavior that lands them in some very awkward situations over the course of three hilarious seasons.

When Shrill, based on Lindy West’s 2016 book Shrill: Notes from a Loud Woman, debuted in March 2019, six episodes felt a little too short. We got to know Annie (Aidy Bryant) and her family and friends, but much of the conflict stemmed from her being a fat woman. In season 2, it’s clearer that Annie was trying to be herself and what others wanted, which is frustrating and relatable to a lot of women.