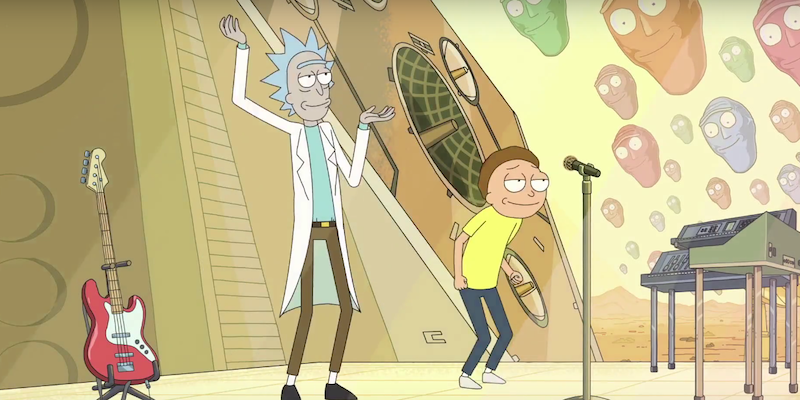 We've searched every dimension of the 30 most interesting facts about Rick and Morty.

Adult Swim’s Rick and Morty has built a fiercely loyal cult following since its debut in 2013, thanks in large part to the way it blends morbid humor with human catharsis. No show with a character named Mr. Poopy Butthole has ever made people feel so much.

After a long wait, viewers are finally experiencing season 3 of the hit show. Though the series hasn’t aired a huge number of episodes, it already has a vast history and mythology, which are helpful to know if you want to catch some of the more subtle jokes and references. To kick off the new season, here’s a list of 20 interesting facts you probably didn’t know about Rick and Morty.

20 schwifty facts about Rick and Morty

Rick and Morty creators Dan Harmon and Justin Roiland initially worked together on Channel 101, an L.A. based media collective started by Harmon (Community) and Rob Schrab (The Sarah Silverman Program). Channel 101 was a monthly, non-profit short film festival, where participants would create and showcase shorts in the format of a TV pilot. Each short was under five minutes long, and at the end of each show, a panel and the audience would vote on which pilot would get invited back for the next screening.

Rick and Morty originated in 2006 from one of Roiland’s Channel 101 shorts, an animated parody of Back to the Future called The Adventures of Doc and Mharti. In this bizarre spin on the beloved ’80s film, Doc throws Mharti through a series of hellish nightmares, not unlike the experiences Rick and Morty have now. The animation was significantly cruder, but the spirit and pitch-black sense of humor of the show remain intact. Fair warning: The episode is definitely adult-rated.

In addition to co-creating Rick and Morty, Justin Roiland is also a successful voice over actor. He provides the voices for both Rick and Morty on the show, and has done work for HBO’s Animals, The Simpsons, Gravity Falls, Fish Hooks, and Adventure Time.

Beyond their own adventures, Rick and Morty have broken into advertising and even some other pop culture universes. In addition to wrecking chaos in Springfield during the couch segment in the May 17, 2015, season finale of The Simpsons, our lovable adventurers have appeared in ads for Alien: Covenant and Hardee’s/Carl’s Jr. What makes these appearances each time with their brand of pitch black humor. 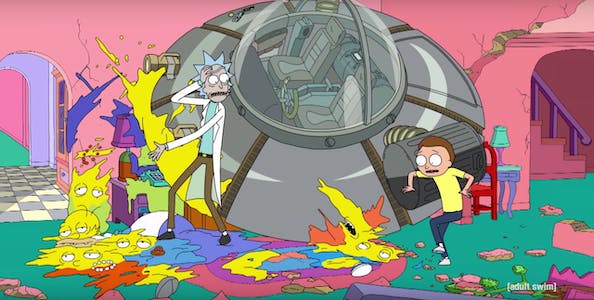 Despite airing on different channels and being intended for wildly different audiences, Rick and Morty and Disney XDs Gravity Falls take place in the same multiverse. While never officially established, a simple easter egg confirms the theory. In the Gravity Falls episode “Society of the Blind Eye” Grunkle Stan’s coffee mug with a question mark, pen, and notebook are sucked into a portal that supposedly will open a gateway to countless new worlds. You can see these items pop out of one of the portals during “Close Rick-counters of the Rick Kind.” 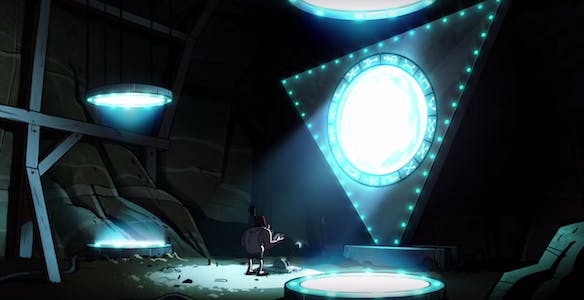 Rick and Morty is the first show in TV history to premiere an episode on Instagram. Before it aired on Adult Swim, “Rixty Minutes” debuted on the show’s Instagram account, posted over 109 different 15-second videos. You can still watch the episode in this 15-second format over on its page.

In “Close Rick-counters of the Rick Kind” it was revealed that Doofus Rick’s Morty looks like Eric Stoltz from Mask. Stoltz was originally cast as Marty McFly in Back to the Future, the inspiration for Morty in the first place. However, after a few weeks of shooting, director Robert Zemeckis felt Stoltz wasn’t working out, and recast the part. Just as there are alternate Mortys, there are alternate McFlys.

In “Something Ricked This Way Comes,” Jerry spends the family breakfast playing a simple tablet game where he pops a never ending series of balloons. While originally a parody of mindless mobile games, the series’ creators have released the game online. You can download Jerry’s Game, complete with in-app purchases, on iOS. 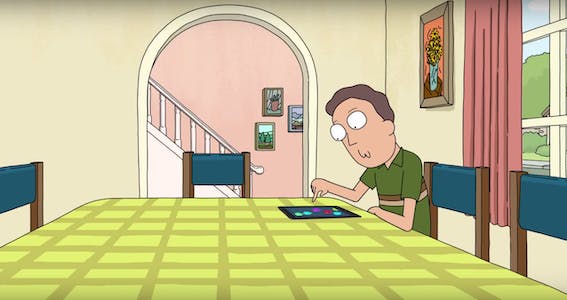 The vast majority of the alternate universe TV shows and commercials in “Rixty Minutes” and “Interdimentional Cable 2: Tempting Fate” were riffed off the cuff by the actors. Rick himself comments while watching that the ads “have an improvisational tone.” 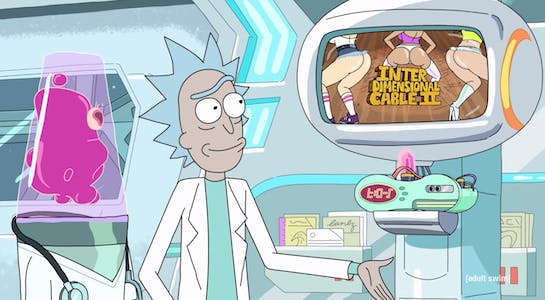 10) There is a tragic meaning to Rick’s catch phrase

At first, it seems like Rick’s catchphrase, “Wubba lubba dub dub,” is just something silly he says from time to time. However, in the episode “Ricksy Business” Birdperson reveals it is a phrase from his culture’s native language that means, “I am in great pain, please help me.”

Despite the Back to the Future connection, Justin Roiland says they’ll never do an official time travel episode. In fact, the first episode of season 2, “A Rickle in Time” was designed to show why the series doesn’t do time travel episodes. In an interview with The Hollywood Reporter Roiland said, “It [“A Rickle in Time”] accomplishes something that I think is important that we set out to accomplish with the episode, which is, you should never f— with time. We wanted to tell a story of why we don’t do time-travel on the show and why time-travel is a f—ing nightmare and just a complete f—ing mess.”

12) Morty may not be Rick’s original Morty

While Rick wasn’t around for the childhood of the Morty we know, he did spend time with a baby Morty at some point. In “Get Schwifty” Morty asks about a picture of Rick holding a baby Morty on Birdperson’s wall. Birdperson quickly changes the subject. The baby Morty appears again in “Rick Encounters.” During a flashback through Rick’s memories, an image shows Rick picking up a baby Morty. The problem is Rick just came back into the family’s lives. At the beginning of the pilot, Rick has only been back with the family for one month after abandoning his daughter Beth 22 years earlier. Who is the baby Morty that Rick picked up? We’ll have to wait and see.

According to the DVD commentary, Dan Harmon and Justin Roiland sold the series and wrote the first draft of the Rick and Morty pilot on the same day. Roiland, knowing Harmon’s tendency to procrastinate, encouraged his co-creator to get right to work, reportedly telling Harmon, “Wait, if you go home, it might take us three months to write this thing. Stay here right now, and we can write it in six hours.” The team set up in Harmon’s unfurnished offices for Community on the Paramount Pictures lot, sitting cross-legged on the floor with their laptops until it was done.

14) The show will sometimes change static details, like the opening credits, when the story calls for it 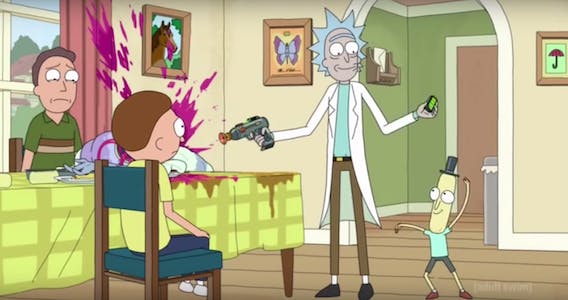 15) Dan Harmon has mocked Community on the show

On the commentary track for “Ricksy Business,” the creators admit that Birdperson is a parody of The Hawk from Buck Rogers. While originally just a throwaway background character Birdperson has become an important part of the series cast.

Rick and Morty‘s opening theme is a combined parody of the theme songs for Doctor Who and Tintin. You can hear all three themes here to compare.

Adult Swim was originally apprehensive about allowing Roiland to do both voices for Rick and Morty. They feared Morty was underdeveloped and too much of a punching bag, so the creators wrote four paragraph length short scenes to showcase a more assertive version of Morty. One of those scenes became the argument Morty has with Rick during the cold open of the pilot.

During Comic-Con 2016, the Rick and Morty crew reenacted a real-life court hearing in the case State of Georgia v. Denver Fenton Allen. Allen’s argument with a Georgia judge became a viral hit thanks to the wild nature of the defendants profane and belligerent dissent. When shown at Comic-Con, the debate was accompanied by an animatic, which you can see here.

A fan took the audio and animated the whole thing over the course of two months. The results look as good as the show itself.

20) Season 3 will feature some hardcore method acting from Rick

The character of Rick is a brutal drunk, but in episode 4 of the upcoming Season 3, he apparently goes on a bender to end all benders. To properly portray the obliterated Rick, Justin Roiland got hammered to record his lines. The process and unfortunate results were documented by Adult Swim. Don’t drink tequila and record vocals gang.