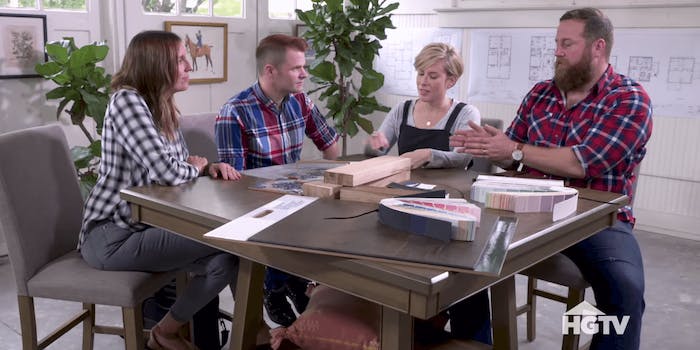 From Chip and Joanna Gaines to 'Property Brothers,' we've got you covered.

Where to stream HGTV

When all the high stakes drama is done, and all the reality television is devoured, sometimes you just need to stare at some plants and remodeled kitchens. HGTV has been the place to do that for years, and it’s time you renovated your home viewing experience alongside your musty bathroom or porch. If you’re looking to get rid of expensive cable plans and find something simpler, the world of online streaming has you covered. Here’s how to watch an HGTV live stream for free.

Launched in 1994, HGTV’s original programming style is almost indistinguishable from its modern incarnation. It’s still all about tearing apart fixer-upper houses or gardens and replacing them with something gorgeous. Popular HGTV shows include Fixer Upper, which launched Chip and Joanna Gaines to stardom, Flip or Flop, and the criminally handsome twins behind Property Brothers.

HGTV is available on a few of the major live TV streaming services. When trying to decide which one is best for you, you’ll want to weigh the cost, the other channels you’ll receive, and the compatible devices for streaming.

HGTV on Hulu with Live TV

To watch HGTV, you’ll want to dock in at the FuboTV Standard level.

Other ways to watch HGTV online

Like a lot of other channels, HGTV will let you watch from a desktop or laptop computer, as well as the official HGTV app, so long as you can provide some verification. Go to watch.hgtv.com or the app (available on iOS, Android, Chromecast, Amazon Fire, Apple TV, Roku), click to sign in, and you’ll be prompted to enter your account information from an accepted streaming service. If you subscribe to Philo or Hulu, you’re good to go. The website and app are not compatible with Sling TV or Fubo subscriptions.