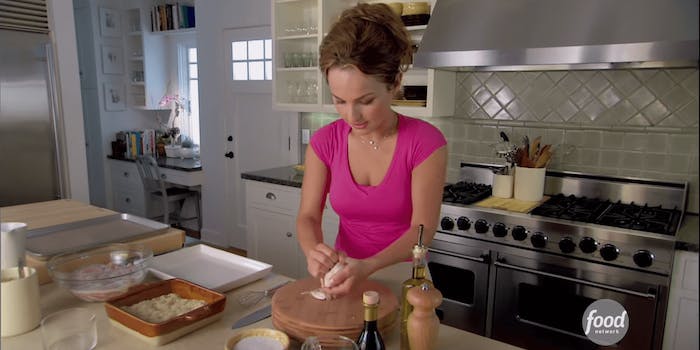 How to watch Food Network online for free

From Guy Fieri to 'Iron Chef America,' here's what you need to know.

You might be reading this article while eating a bag of chips, and that’s OK. The Food Network isn’t here to judge. But there’s nothing like watching Food Network live, catching professional chefs concocting magical dishes to make you feel like reaching for loftier tastebud heights in your own home.

You don’t have even to follow along with recipes in the kitchen while hooked up to an expensive, obsolete cable box. If you’re looking to cut the cord and jump on the streaming bandwagon but keep the Food Network, we’ve got you covered.

Here’s everything you need to know about how to watch a Food Network live stream for free.

Food Network is available on a few of the major live TV streaming services including Philo, Hulu, Sling, and Fubo. When trying to decide which one is best for you, you’ll want to weigh the cost, the other channels you’ll receive, and the compatible devices for streaming.

Philo is a budget-minded streaming service, and depending on what channels you want, it might be right for you. The 59 Philo channels lean decidedly toward entertainment; the Philo channel list includes AMC, Discovery, IFC, Lifetime, and the Paramount Network, all for $20 a month. If you’re a fan of Food Network, you’re in luck: You can find it on Philo. Philo also comes with free cloud DVR, but shows recorded are deleted after 30 days, so binge responsibly.

To watch Food Network, you’ll want to dock in at the FuboTV Standard level.

If you’re already looking to AT&T for your wireless needs, you might consider AT&T TV Now to cover streaming for you. AT&T TV Now channels start with Plus and Max, which even include HBO. Then, AT&T plans expand from there, approaching cable selection and pricing with AT&T TV Now’s biggest packages. AT&T streaming also comes with Cloud DVR, letting you record up to 20 hours of TV per month. If you’re looking for Food Network, get in at the AT&T TV Now Entertainment tier to stream it.

Vidgo offers a package for under $40 a month that pulls together more than 60 English-language channels into its National English Package. Vidgo channels include ABC, Fox, the ESPN family of channels (including ESPN Deportes), and it’s one of the few streaming services that carries BeIN Sports. But it’s like Fubo in that, even though it started out for streaming sports, it carries a lot more now. You might be surprised to know that Vidgo’s an option to stream Food Network—and then you chat about it online via Vidgo’s Social TV platform.

If you’re looking for Food Network, know that you can stream it on YouTube TV.

Other ways to watch the Food Network

Like a lot of other cable channels, Food Network will let you watch live TV or on-demand content from either its official site or the official Food Network app. For the site, simply go to FoodNetwork.com, click the “On TV Now” button on the right, then click “watch live.” You’ll be brought to a new page, where you’ll want to click “Sign In” on the top right. You’ll then be prompted to provide your television provider login information. If you’re subscribed to DirecTV Now, PlayStation Vue, Hulu, or Philo, you’re good to go. If you subscribe to Sling TV or Fubo, you’re not able to watch a Food Network live stream.

For the app, simply repeat the same process by signing in with your television provider account info. The app is available on iOS, Android, Amazon Fire TV, Apple TV, Roku, and Chromecast.

What is the Food Network?

Founded back in 1993, the Food Network was originally called the TV Food Network. While the programming hasn’t changed much, the faces have. Food Network has lifted the profiles of already well-known chefs like Bobby Flay, Emeril Lagasse, Paula Deen, Alton Brown, Guy Fieri, and many more. By day, Food Network runs instructional programs that teach viewers how to cook. By night, programming focuses entertainment and reality television programming, most notably Iron Chef America. Other popular shows include Guy Fieri’s Diners, Drive-Ins and Dives; Cake Wars; and Barefoot Contessa, to name just a few.