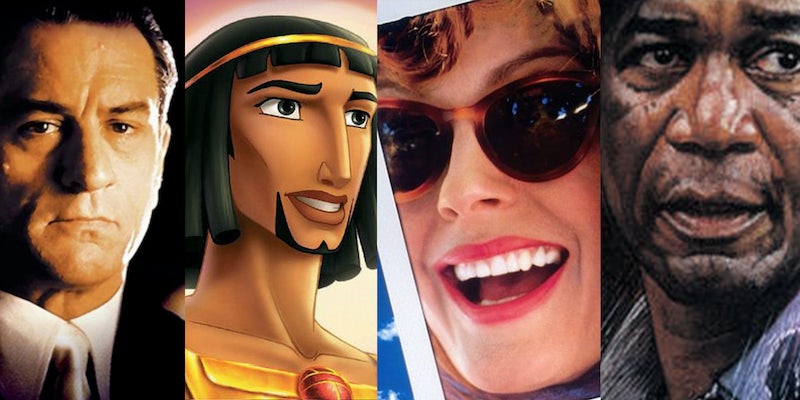 Classic movies on Hulu: the best in comedy, drama, and action

A blast from the past.

Anyone that’s taken a college level American history course knows the harrowing true story of Solomon Northrup, a freedman who was kidnapped and tossed back into the throws of chattel slavery in the south. After more than a decade, he finally frees himself, and tells the world his harrowing experience. Hard, but necessary viewing.—Jaime Carrillo

Fresh off the action-packed Kingsman franchise, consummate chav Taron Egerton dazzles as the most dazzling musician of the post-war period: Elton John. Like all great biopics, it doesn’t hold back on all the steamy drama, and this is Elton John we’re talking about. There’s a lot of drama to be had. —J.C.

Some actors were born to play certain roles. Stephen Fry doesn’t just encapsulate Oscar Wilde in this anglotastic biopic. He practically becomes him. Based on the Pulitzer Price winning 1987 biography of the British writer, it’s a must-watch for all fans of across-the-pond literary history. —J.C.

The only foreign film to ever win the Academy Award for Best Picture. And with good reason. The screenplay is Bong Joon-ho’s most cutting, and that’s saying something considering social commentary is his wheelhouse. If you haven’t already seen it, you should. —J.C.

Everybody loves a good conspiracy. But a Vatican conspiracy? They don’t get much juicer than that. Based on one of the biggest best-selling books this side of Westeros, DaVinci Code is as fun as the dramatic thriller gets. —J.C.

The third film in the Trek reboot series finally feels like classic Star Trek. Yes, it’s got the usual action schlock as the two previous films, but there’s a fair amount of heroes gripping with ethics and social questions on the edge of the frontier. If the CGI-fest of the previous films turned you off, give this one a go. I can wholeheartedly recommend this, as a Trekkie who finds little to enjoy in new Star Trek. —J.C.

One of the most inspired ideas in the James Bond canon has 007 square off a villain who is essentially, another version of him. You could call him the beta version. Bond is grizzled and worn, and his superiors are unsure if he’s still fit for service. Javier Bardem plays the most memorable villain this side of Goldfinger. —J.C.

As a general rule, classic film lovers should be willing to watch anything with Barbara Stanwyck in it. In this Western from 1950, she plays a fiery heiress who clashes with her difficult cattle-rancher father. When another woman enters his life, their relationship takes a turn for the worse. Director Anthony Mann may be known to subscribers of the Criterion Collection, which this film is currently included in. —Chris Osterndorf

Some of the post-Civil War tropes at the heart of The Tall Stranger don’t hold up in 2018. That said, there’s still a lot that works about this 1957 Western following a Northern officer trying to help a group of former Confederate soldiers. Chiefly, there’s the great chemistry between leads Joel McCrea and Virginia Mayo, whom classic movie lovers will likely recognize from titles such as Sullivan’s Travels and Foreign Correspondent, and The Best Years of Our Lives and White Heat, respectively.  —C.O.

Most people probably remember Ray Millard from films like Alfred Hitchcock’s Dial M for Murder, and Billy Wilder’s The Lost Weekend. What many don’t know is that he was also a director who made several films in the ‘50s and ‘60s including this Western. His first movie behind the camera, A Man Alone also stars Millard as a gunfighter forced to go into hiding when he is accused of taking down a stagecoach.

When New York students Bill Gambini and his friend Stan Rothstein get arrested on murder charges when driving through rural Alabama, there’s only one person Gambini’s going to call: his street smart cousin Vinny. Technically, Vinny isn’t what you call “accredited” or “licensed,” but it’s not going to stop him from wowing Bible Belt jurors with his Big Apple wit. It’s a comedic masterpiece, but also lauded by those in the law profession for being a pretty accurate portrayal of a typical murder case. (Available exclusively through Hulu with Live TV) —J.C.

Heathers is a comedy about school shootings, and while that may be a hard sell, it’s still a great movie. You would think that growing sensitivity and cultural turmoil would’ve made it unwatchable in the years since it came out, but on the contrary, this black comedy works because of its take on today’s hot-button issue. Watching Heathers in the context of our national conversation about bullying actually makes it an even more interesting experience.

On rare occasions, the sequel is better than the first. Godfather II. Home Alone 2. And perhaps most of all, Shrek 2. The same laugh-a-minute goodness from the first film is turned up to 11 in this sequel. I defy you to not thoroughly enjoy yourself. Heck, you might even download the soundtrack afterwards. —J.C.

Imagine for a minute if James Bond had a baby with Mr. Bean. Their brood would essentially be Johnny English, which is one of Rowan Atkinson’s underrated characters. If you love Blackadder, Mr. Bean, or are a certified Bond freak, you’ll find something to love here. Consider it family friendly Austin Powers.—J.C.

The Farelly brothers filmography is full of hits and near misses. But just about anyone with an opinion can agree that the Jim Carrey/Jeff Daniels 1994 comedy is easily their best. Does it hold up? Sort of. There’s plenty of cringe here, but cringe is sort of the Farelly brothers domain. –J.C.