Netflix: Cost, plans, what to watch, and how to sign up

Here's everything you need to know about getting started with Netflix.

Every year more and more Americans cut the cord with their cable company. If you’ve been tethered to your cable box for the last decade, you might not know about the myriad streaming options out there. It can be daunting, but there’s one service everyone should start with: Netflix. But what is Netflix? Here’s everything you need to know to get started.

WATCH: The Best Movies on Netflix

Netflix is the original major streaming option for home television audiences. When it started nearly 20 years ago, Netflix was a subscription-based DVD service that would mail DVDs straight to your home. It still does that too (more on that later), but in 2007, Netflix debuted its streaming service, allowing viewers to watch thousands of on-demand TV shows and movies ad-free. Ten years later, Netflix has become one of the biggest names in entertainment, producing critically acclaimed TV shows (Daredevil, House of Cards, Stranger Things, and Luke Cage, to quickly name four) and movies and hosting original comedy specials.

Netflix now offers up a wide range of content across every genre you can imagine. From full seasons of today’s hottest TV shows to classic movies, Netflix has more entertainment than you could ever possibly watch.

How does Netflix work?

If you’ve ever used a streaming service, Netflix’s interface will be instantly familiar, but even for first timers, getting started is a breeze. Your primary source of movies will be your queue. As you look through content on the Netflix website and app, you’ll see a little plus sign in a circle. This button adds things to your queue for later viewing.

When you start using Netflix, your queue will be empty. Enjoy this period. It will be the last time as a Netflix user your queue will be fresh and new. One day you will look out at the expense of your queue and say, “When the hell did I get so into shows about cake?”

Under your queue, Netflix offers several rows of options for movies and television shows, sorted by genre. As you watch more content, Netflix will learn about your viewing habits, offering up custom genres with colorful names like “80s action comedies” or “gory unconventional horror films for feminists.” Netflix’s algorithm is one of the smartest in the industry, so once you’ve moved past the stage where you’re just watching every big movie, take a chance on Netflix’s recommendations. You’ll be surprised how often they’re correct.

Netflix’s library contains a broad range of hit movies and shows from major networks. TV series like Arrow, The Flash, Scandal, Grey’s Anatomy, and The Walking Dead come to the service a few months after their official airdate. 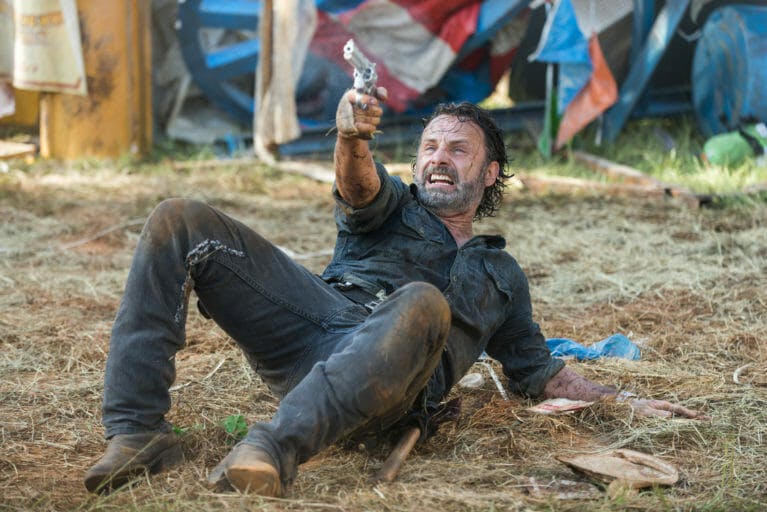 Netflix still has the strongest library of new and old classic films, but as the company has grown and competitors like Hulu and Amazon Prime bid for exclusive rights, studios have demanded more money for their content, shrinking Netflix’s options. That’s why Netflix has invested incredible amounts of money in producing their content, working with filmmakers like David Fincher on the Emmy-nominated House of Cards and Marvel Studios on Daredevil, Iron Fist, Jessica Jones, and Luke Cage—not to mention the upcoming The Punisher and The Defenders. Netflix is the exclusive home of Adam Sandler’s next few comedies, with films like The Ridiculous 6 already released on the service. Fans of foreign films will appreciate investments in films by directors like Bong Joon-Ho (Snowpiercer).

But wait, there’s more: Netflix also features an incredible amount of original standup comedy. You can stream specials from Dave Chappelle, along with Sarah Silverman, Tracy Morgan, and Norm MacDonald, among dozens of other comedians. There’s no better service for standup comedy right now than Netflix.

The company has also heavily invested in documentaries, most notably true-crime thrillers Making a Murderer and The Keepers and the Academy Award-nominated 13th.

How much data does Netflix use?

A lot, but that might not matter depending on your mobile and internet plans, and it’s easy enough to adjust. Here’s a breakdown of how much data Netflix uses:

If you need help adjusting your settings, go here.

If you watch a lot of video on the road and want to save your data, Netflix has a leg up on the competition. You can easily download videos to their smartphones and tablets so you can keep the entertainment rolling even on the road without killing your cell phone bill. It’s easy. Jut look for the white download arrow on whatever you’re watching. (Here’s more info on how to download from Netflix if needed.)

How much does Netflix cost?

Netflix service comes in three tiers; Basic, Standard, and Premium. No matter what kind of subscription you have, you get access to the same content as everyone else. None of Netflix’s content is locked behind a paywall after you’ve subscribed.

For the $8.99 Basic plan, you can watch Netflix content on one screen at a time on any device that supports the service. Also, your streams will be in standard definition, which is as good as a clear standard broadcast TV show.

For the $12.99 Standard plan, you can watch Netflix on up to two screens at the same time, and it comes in high-definition. For most users, this tier will be ideal, letting you avoid any nasty arguments where your roommate or spouse wants to watch Breaking Bad while you’re enjoying The Great British Bake Off.

If you own a 4K TV and have a strong enough internet connection, the $15.99 Premium option is worth considering. You get access to 4K Ultra HD content, and the ability to stream on up to four devices at the same time. At every tier your first month of the service is free, so you can figure out exactly which level is right for you.

It’s worth noting that Netflix has raised its rates a few times in recent years. In 2015, the standard two-stream HD plan only cost $8.99, while a non-HD plan cost $7.99. Of course, that was before Netflix started pouring hundreds of millions of dollars into content production, but it’s worth keeping in mind for budget-focused viewers.

If you’re interested in getting some DVDs by mail too, that’s still an option. Here’s more on how it works.

Netflix and both have different price tiers, and each service has its upsides and downsides. With Netflix, your $8.99 plan gets you unlimited ad-free content, but you’ll only be able to watch in standard definition until you upgrade to the $12.99 tier. Hulu gives you a massive library of HD content for $5.99, but you’ll be watching ads during your TV shows until you upgrade to the $11.99 tier. Hulu Premium is $11.99 a month and comes with no ads.

Hulu shines when it comes to TV content, with exclusives like The Golden Girls, Seinfeld, and Cartoon Network’s catalog you won’t find on Netflix. (There’s also Hulu with Live TV, which allows you stream live TV programming.) You can watch Scandal on both services, but if you want to see new episodes while they air, you’ll need to get Hulu. While Hulu has great original content like Handmaid’s Tale, Netflix still offers more across a wider range of genres. Ultimately, whether you decide to subscribe to Hulu or not comes down to your feelings on ads or if you need to watch series when they’re on TV or if you don’t mind waiting until the season is over to catch up.

Amazon Prime is a hard sell at first, even though it ends up being a little cheaper than Netflix. Rather than pay month to month, Amazon Prime is paid in one lump sum of $99 at the beginning of the year. That gets you free two-day shipping on Amazon and access to its streaming content. That includes HBO’s back catalog, along with Amazon’s original content like Man in the High Castle. Amazon has recently doubled down on production, rivaling Netflix with Academy Award contenders like Manchester by the Sea.

It boils down to this: If you already need an Amazon Prime subscription, its video library is an added bonus. But if you’re looking specifically for the streaming content, you’ll want to add Netflix if you can afford it.

What to watch on Netflix

We can’t stress this enough: There’s more content on Netflix than you’ll ever be able to watch, and there more being added every month. (Here’s our regularly updated list of what’s new on Netflix.) You can spend hours looking for the right thing to watch on any given night. If you need some help getting started, our critics have curated a bunch of different guides that will ensure you find something worth streaming. They’re all updated monthly and vetted by our Upstream team. If you don’t find something below, well, you can always try this nifty Netflix hack.

So, how do you get started with Netflix?

Most smart TVs come with Netflix preloaded. All you have to do is sign up for a subscription and add some things to your queue.

You can watch on every device you can imagine, be it a game console, laptop, or smartphone, and you can use streaming media players like Roku, Amazon Fire TV Stick, or Google’s Chromecast to stream from those devices on your TV. Streaming media players are surprisingly affordable. Here’s a quick guide if needed.