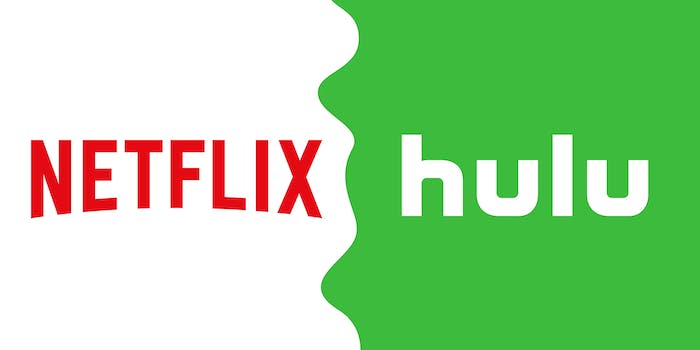 Hulu vs. Netflix: Which streaming service is right for you?

It's the battle of the streaming services.

Your Netflix cost depends on the quality of video you want and the number of screens you plan to use. The base fee to stream Netflix is $8.99 a month, but that only affords you one screen at a time and standard definition. For $13.99, you get an extra screen and the ability to download shows and movies on an additional phone or tablet. If you’re tech-savvy, and like to watch your movies across two to four different screens in high definition, the price shifts up to $15.99 a month. Most people, especially those sharing the account with roommates or family members, opt for either the $13.99 or $17.99 option.

Of course, you can always add some DVDs (remember those?) to the mix with Netflix. The upside to DVD rentals from Netflix is that you’ll be able to watch new releases sooner, and there are countless movies available on DVD that aren’t available to stream. The cost runs from an additional $9.99 to $14.99 per month, depending on how many discs you want to have out at a given time.

Netflix also gets points for keeping things simple. Unlike Hulu, which has a lot of options and plans, Netflix’s three options are refreshingly easy to understand.

If you’re a Sprint customer, you can get Hulu with Limited Commercials for free. Check out our full Sprint-Hulu guide for more details. Here’s a complete breakdown (and we’ll circle back to Hulu Live TV shortly):

Want to cut the cord but can’t stand the thought of missing some of your favorite shows? Hulu Live TV might be the perfect solution for you. The monthly service comes with up to nearly 70 channels (depending on local TV in your market). It includes CNN, ESPN, FX, TNT, and TBS, presented in an instantly familiar programming grid. Hulu Live TV comes with 12 sports channels and a couple of different cable news options, along with local channels and 50 hours of cloud DVR, so you can quickly catch up on your must-see TV.

One other benefit to consider when weighing Hulu vs. Netflix: Hulu offers the cheapest way to watch HBO online. There are a couple of other add-ons that you should know about too.

Between its partnerships with Spotify and Sprint, its ability to add live TV or specific premium channels like HBO and Showtime, Hulu helps you get more for your money.

When it comes to original content, there’s no contest. Netflix has produced some of the most critically acclaimed originals of the past few years with hits like Love is Blind, Stranger Things, and Umbrella Academy. There’s so many, we’ve made a complete guide to the best Netflix original series to keep track of them. That said, Hulu also has brought great originals like The Handmaid’s Tale and The Mindy Project to streaming, but it still has a lot of catching up to do.

Netflix’s library shrunk has significantly over the last few years, according to AllFlicks. If you’re just weighing Netflix vs. Hulu, however, Netflix is still signifcantly better. Along with its acclaimed Netflix original movies, the service truly offers something for everyone.

Check out our Netflix guides for the best war movies, documentaries, anime, indie flicks, true crime, food shows, Westerns, and movies based on true stories streaming right now, to get an idea. There are also sad movies you’ll need tissues, weird movies when you want to warp your brain, and standup specials that will have you laughing out loud. You can keep up with whats new on Netflix each month with our guide.

Hulu’s catalog overlaps a lot with the movies on Amazon Prime Video. While it has a solid selection of funny movies, thrillers, and classic movies, it can’t quite compete with Netflix. If you’re curious, here’s our list of the best movies on Hulu. You can also compare what’s new on Hulu each month to what’s new on Netflix to see how they’re trying to outdo each other.

Finally, this is an area where Hulu is the undisputed champion. Hulu hosts TV series from networks like ABC and FX, allowing you to catch up on shows in real time, as opposed to waiting till after a season has concluded (and oftentimes much longer) for them to hit Netflix. There are also TV shows that are exclusive to Hulu, but that’s not why Hulu’s TV section shines.

Hulu dominates the competition here by having the largest collection of streaming TV shows around. From currently running series to entire runs of classic FX shows, Hulu has more TV than anyone else.

Technically, you can watch Hulu in 4K, but you have to have either a PlayStation 4 Pro or Xbox One S, and even then there are only a handful of Hulu originals that you can watch in 4K. By contrast, Netflix has hundreds of movies and shows available to stream in 4K. In fact, here’s a complete list of 4K Netflix movies and TV shows. If you’re looking to make the most of your 4K TV, your choice is obvious.

No one wants to spend time getting lost in a poorly designed website. Netflix’s interface is fairly simple. The streaming service makes it easy for users to search, browse, and read up on any show before watching it. Users can add series, movies, and episodes to My List, which is used as a reminder to catch up on your favorite series or to watch that one controversial documentary everyone is buzzing about. Netflix offers suggestions based on what you’ve watched and organizes it by a specific TV series, movie, or genre. Its algorithm only gets stronger in its ability to predict your taste by your viewing frequency and if you rate a show after watching.

Hulu’s organization, on the other hand, takes a little getting used to. Its 2020 update greatly improved its once-confusing menus. Now things are separated into handy sections like My Stuff, Movies, and TV Shows. While this makes for a more user-friendly experience, Hulu’s insistence on constantly recommending you new content clutters the experience.

Still, the basics will be instantly familiar to any user. Much like on Netflix, Hulu users just click the plus sign to add a show to their Watchlist. Hulu takes it a step further by showing users when a new episode of their listed series is available. Users can view their Watchlist, and it will notify them if a show is about to expire soon, which Netflix fails to do.

While it’s hard to quantify, Netflix’s algorithm—especially if you make the effort to rate what you watch—is better at recommending other titles you might enjoy. Even more importantly, Netflix has the easiest the understand and navigate menus, helping you get started watching your favorite shows faster.

Netflix lets users pick how they want to watch their shows by offering different levels of quality streaming like basic, standard, HD, and Ultra HD. The streaming service is available for watching across a wide variety of supported devices and can stream up to 1080p with surround sound audio on a handful of them.

Be careful when choosing to stream in Ultra HD, though; it uses a surprising amount of data.

Hulu’s quality is not as easily available as Netflix’s. In order to stream, users will need a display that can play HD or 4K Ultra HD resolution and a steady broadband connection. (Hulu is not hotspot friendly.) The quality of Hulu’s streaming ultimately depends on your device, and users can stream 4K Ultra HD on a Playstation 4 Pro or XBox One S.

Here is a breakdown of Hulu’s streaming quality:

That Netflix allows you to choose the quality you watch with is a huge perk, one that could really impact your pocketbook if you need to be mindful of how much data you’re using.

Netflix is ad-free, but Hulu’s cheapest subscription option has commercials, which can be a deal-breaker for some. Both subscriptions options for Hulu give users the same content, but commercials still seem to find their way before a few shows under the option claiming to have zero commercials. There are just no ads interrupting your shows or movies.

So, which is better: Hulu or Netflix?

In the end, it really depends on what you’re using these services for. If you’re looking for a deep catalog of TV shows, movies, and comedy specials, or you’re tired of being left out of conversations about Orange Is the New Black and House of Cards, you obviously want Netflix. It’s a great deal, especially considering how much you get in return.

But if you’re mostly interested in watching the latest TV shows as they come out, without needing to Tivo them, then you’ll want to get Hulu. Also, if you’re looking for a streaming service that allows you to still watch live TV, Hulu is your best bet. Chances are you could subscribe to both and still spend less than what you would otherwise for cable.