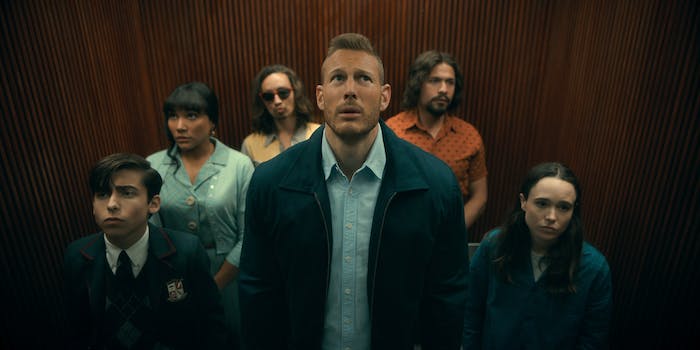 The disaster-prone Hargreeves family are now trapped in the 1960s, playing to season 1's comedic strengths

The Umbrella Academy ticks along like a well-oiled machine, delivering punchlines and needle-drop action scenes with boundless panache. Is it groundbreaking material for the over-exposed superhero genre? No, but it’s consistently entertaining and boasts a glorious sense of style, playing to the strengths of its chaotic ensemble cast. There’s a refreshing lack of realism here, exemplified by a character with a fishtank for a head.

Adapted from the comics by Gerard Way and Gabriel Bá, Umbrella Academy is guided by Murphy’s Law. Our cast of seven misfit siblings constantly trip over into new mishaps like an amoral, grown-up version of A Series of Unfortunate Events. The only thing they have in common with mainstream superheroes is their superpowers and daddy issues. Otherwise they’re a mess, routinely doing the wrong thing from a strategic or ethical standpoint, and more likely to end the world than save it.

Season 1 ended with Vanya (Ellen Page) accidentally blowing up the moon, and Five (Aidan Gallagher) teleporting the whole family back in time. This leads to an energetically ridiculous season 2 opener, as each of the siblings arrive in a different year of the 1960s, forced to fend for themselves. The only sign of a typical superhero plot structure is the inevitable battle sequence in the finale. Otherwise, Umbrella Academy is a series of interconnected shaggy-dog stories where the main characters bicker, self-sabotage, and comically misuse their powers while being hit in the face by narrative curveballs.

Stuck in the 1960s, each of the Hargreeves kids forges a new path according to their values. Diego (David Castañeda) becomes obsessed with preventing JFK’s assassination, landing him in a mental institution where he befriends a woman called Lila (Ritu Arya). She’s an amusingly weird asshole, and therefore a welcome addition to the cast. Klaus (Robert Sheehan) starts a cult and Allison (Emmy Raver-Lampman) joins a civil rights group, while Five is the only one who remains on track, trying to save the world from another apocalypse. You’d think the whole armageddon thing would get old, but it works because the main characters just don’t treat it very seriously, constantly sidetracked by their own problems. Teen actor Aidan Gallagher remains a stand-out star in a cast of adults with big, flashy personalities, stealing scenes with his blend of spluttering rage and crotchety mannerisms; a 58-year-old man trapped in a middle-schooler’s body.

Season 2 is an upgrade from season 1, but there’s still a noticeable double standard between the male and female leads. Thematically speaking, Umbrella Academy is all about childhood trauma stemming from Reginald Hargreeves’ uniquely dysfunctional parenting. But crucially, it’s often played for laughs. When Luthor, Diego, Five or Klaus falls prey to their personal issues, it’s invariably hilarious. (Tom Hopper is an underrated gem here, playing Luthor with pure airhead energy.) The boys also get a lot of physical comedy, because the show’s directors and editors have a knack for visual gags – something that’s noticeably absent from a lot of comic book adaptations.

By contrast, Allison and Vanya both choose quiet domestic lives, and both of their storylines follow a serious tone. All the Hargreeves kids are weighed down with grief and guilt, but for the men, this is depicted as a kind of tragicomic emotional pratfall. The show pokes fun at their self-destructive behavior, while their sisters aren’t allowed to be funny in the same way. Thanks to the 1960s setting, Allison spends much of her time dealing with racism while her brothers embark on fantastical hijinks. Vanya’s subplot mostly focuses on family drama—thankfully with a female love-interest this time round. When it comes to superpowers, the boys get to play around with their abilities while Vanya and Allison struggle with being “too powerful.” Aware that her mind-control powers can get out of hand, Allison vows to never use them again. But this choice isn’t handled especially well in the context of her 1960s life, where she and her Black social circle are constantly under threat from racists.

The writers could’ve used this conundrum to tell a story about how individual mind-control can’t solve structural problems, but instead we focus on Allison’s frustrating choice not to use her powers at all. In a show that routinely doles out cartoonish violence against supervillains, it feels weird for Allison to hold back from fighting racist cops. Taken alongside Vanya’s role, we see both of the female heroes abstain from misusing their powers, while Five or Klaus’s moral ambiguity is just… fun. The guys are allowed to screw up in entertaining ways, while the girls receive downbeat subplots where they’re punished for their lack of restraint.

Sexism qualms aside (and really, who hasn’t had to ignore some problematic themes to appreciate an otherwise-fun TV show?), I enjoyed Umbrella Academy’s second season. Some people will probably be irritated by the show’s barrage of jukebox montages, but from my own perspective: keep ‘em coming. There’s never a dull moment in Umbrella Academy, and that’s partly because the soundtrack is so great, turning fight scenes into Tarantino-esque pantomimes, and sometimes acting as a punchline in itself. Rather than attempting a nostalgic playlist for the 1960s setting, we’re treated to an eclectic mix of pop music from the past 50 years, effortlessly syncing up with the vibrant production design and larger-than-life characters. If you liked season 1, you’ll be thoroughly satisfied once again.