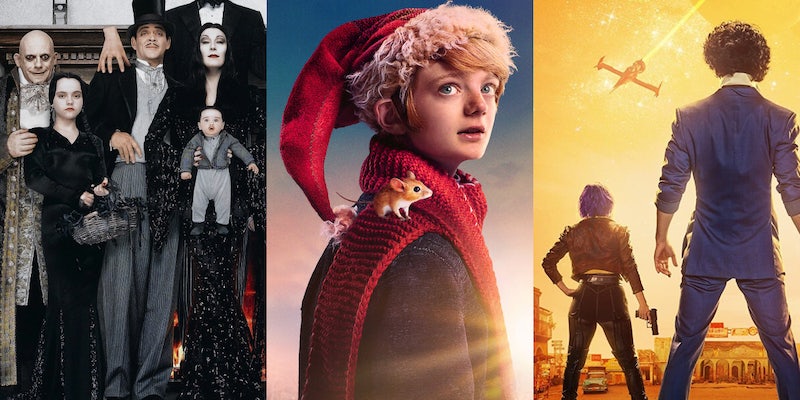 What’s new on Netflix in November 2021

A space cowboy goes live-action, this month on Netflix.

Netflix has one of the largest streaming libraries on Earth, and it changes every month. From new TV shows to movies, its original productions, Netflix keeps your schedule busy. Don’t stress yourself keeping up, let us help. Here are the best shows and new movies on Netflix this month.

Superheroes are often shaped by their origin story. But what about Santa Claus? Rankin-Bass had a take on how he started climbing down chimneys and delivering toys. But what if his origins were a little more gritty?

Based on the book by Matt Haig and the director of Monster House and City of Ember comes a new holiday fantasy that reimagines the story of Father Christmas. Nikolas is shaped into the jolly old elf after venturing into the snowy white north to find his lost father. Featuring an all-star cast of British greats including Jim Broadbent and Maggie Smith, as well as the hilarious Kristen Wiig, A Boy Called Christmas has all the makings of a new holiday classic. – Jaime Carrillo

Has a sequel ever been better than a film franchise’s first outing? In the case of the early ’90s Addams Family movies, the answer is an emphatic “yes.”

This sequel brings back the original cast including Anjelica Huston, Christopher Lloyd, and the GOAT, Raul Julia, playing their roles to the hilt. A black widow is out to claim Fester’s fortune for herself, but must first deal with the strangest family ever conceived. Comedies from this era rarely hold up, but this one does, in spades. There’s even a memorable summer camp scene that was way before its time. – Jaime Carrillo

One of the most celebrated anime series of all time only got two seasons and one movie under its belt before it ended. Compare this to other anime series that simply won’t end. Cowboy Bebop may be prized by anime fans because we only got a mere morsel before waving goodbye to bounty hunter Spike Spiegel and friends. However, the space cowboy Is back in a big way.

Cowboy Bebop is going live-action with an all-new series. Starring John Cho as the titular Cowboy, and featuring all the characters fans know and love. The stoic Jet Black, the sexy Faye Valentine, and even the sinister Vicious. But here’s my question: is that awesome theme song coming back? – Jaime Carrillo

Whether you want movies on the new shows on Netflix, we have you covered. Here’s a list of all the Netflix new originals coming to the service in November 2021.

Pleaser may receive a payment in connection with purchases of products or services featured in this article. Read our Ethics Policy to learn more.