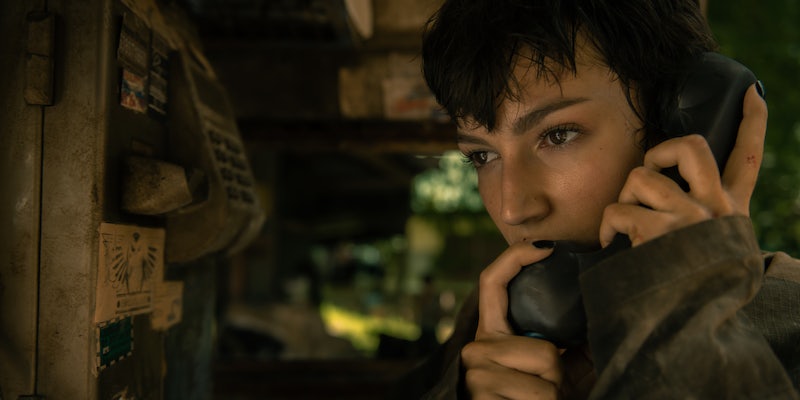 Nothing helps you escape quite like a good TV show binge—but with so many shows vying for your attention, it can be difficult to pick the right one. If you’re tired of hearing about the same heavily promoted American series over and over again, you’re in luck: There’s a foreign television renaissance happening right now, and the best series are all on Netflix. These are the best foreign TV shows on Netflix that will rival anything you’ve seen on American TV (with English subtitles to help you follow along).

The best foreign series on Netflix

Brazilian TV series Coisa Mais Linda follows Maria Luiza as she decides to open a music club in Rio De Janeiro after her husband runs off with a mistress and all their money. The series showcases Rio in the ‘50s, bossa nova music, and the resilience of women from the time period. With its smart storytelling and multidimensional cast, Coisa Mais Linda honors the “beauty that comes from the sorrow of being a woman.” —Tess Cagle

Gomorrah follows Ciro Di Marzio, a member of the Savastano clan, a Neapolitan crime family headed by nefarious drug lord Pietro Savastano. Ciro must navigate the ruthless crime syndicate while also dealing with the tumultuous power struggle within the Savastano clan’s ranks. Fans of classic crime dramas like The Godfather or newer series such as Power and Claws will find plenty to love in Gomorrah and its spinoff, Suburra. It’s a smart, slow-burning drama that sucks you in and doesn’t let go. —Olga Lexell

Call My Agent! focuses on four talent agents for the Samuel Kerr Agency who deftly balance their personal and professional lives as they struggle to save their company. But their worlds get rocked when the agency’s founder dies suddenly. People have drawn comparisons between this French series and Entourage, as both are both about agents trying to keep their star clients happy in a whirlwind entertainment industry. But Call My Agent! is lighter and takes itself less seriously. It’s also fun to see how similar the entertainment industry is in places outside the United States. —O.L.

This hourlong drama from Netflix and Univision wastes no time telling you why its story is different than most American journalism dramas. Mexico, we learn before the opening credits, is the most dangerous place in the world for journalists. To reinforce the point, the series begins with a vigil for a slain political reporter; if you want to pick a particularly lethal line of work, political journalism in Tijuana might be it. Despite some minor shortcomings, Tijuana stands nicely alongside American prestige procedurals that aim to interrogate the relationship between corruption and institutions meant to provide accountability. Given the unique point of view and the compelling subject, American audiences won’t be able to say Tijuana is quite like any show they’ve seen before. —Brenden Gallagher

One of the most original shows on Netflix, Money Heist follows a mysterious mastermind known as “The Professor” who recruits a team of eight people to break into the Royal Mint of Spain and print 2.4 billion euros. It’s the biggest bank heist of all time, requiring 11 days of seclusion and dozens of hostages. Each of the Professor’s recruits has a special ability to aid the epic mission, including hacking, forgery, and psychology. Think Ocean’s Eleven or The Inside Job as an addictive TV show. —O.L.

La Casa de Las Flores, a Spanish-language telenovela created by prolific 33-year-old writer and director Manolo Caro, follows the exploits of a wealthy family that runs a high-end flower shop with a lot of secrets. Status matters in their world, and too many unsavory secrets being aired out in the open could be ruinous. La Casa de Las Flores packs in the requisite amount of plot twists you would expect from a Mexican soap, while also putting issues of race, class, and LGBTQIA rights front and center. Still, there’s a winking comedic playfulness throughout the show, which offers good old-fashioned soapy gloss with some modern renovations. —B.G.

This German-made pre-WW2 drama takes viewers back in time to the Weimar Republic in the Golden Twenties. Creators Tom Tykwer, Hendrik Handloegten, and Achim von Borries recreate the atmosphere with stunning detail. With production costs exceeding $40 million, Babylon Berlin is the most expensive German TV series and non-English language drama series ever. The end result is Cabaret meets crime television. It also offers Americans a dire warning: As the plot progresses, heroes must choose between their morals and nationalism. Babylon Berlin shows us how a progressive nation can crumble when it allows bigotry and intolerance to fester. —T.C.

If you’re more into action and Homeland-style intrigue, Fauda is the show for you. It follows a retired Israeli soldier who’s working on a vineyard when he discovers that an enemy thought to be long dead plans to attend his brother’s wedding. It’s part family drama, part military action and involves some creative twists. —O.L.

From filmmaker Baran bo Odar and writer Jantje Friese, Dark is a show about several intertwining families in the German city of Winden, and the disappearance of several local children. Its half gritty crime drama, half supernatural thriller, all modern prestige television. In the tradition of a depressing amount of series about small towns with missing children, Dark is a cross between Stranger Things, Twin Peaks, and True Detective. It incorporates various elements of ‘80s nostalgia, from warnings about the dangers of nuclear power to philosophical riffs on the nature of time. —Chris Osterndorf

The Rain follows two siblings as they emerge from their bunker six years after a lethal virus spread by rain wipes out almost everyone in Scandinavia. The duo joins a group of survivors and travels to Sweden in search of their father, who they believe can cure the disease, and other signs of life. Along the way, the group struggles to cope in the post-apocalyptic world and finds that the only thing from their former lives that remains is their humanity—their ability to feel fear, love, and grief. While The Rain isn’t particularly groundbreaking, its lack of originality doesn’t hinder its ability to hook viewers into the story almost immediately. —T.C.

Prestige TV series have grown increasingly dark and brooding lately, so if you need levity, look no further than Chinese series I Hear You. It’s a romantic comedy about a distant violin maker and sweet voice actress who fall for each other through a reality dating show. I Hear You is a charming, funny must-watch for anyone who’s been obsessed with Netflix’s latest string of rom-coms, such as Always Be My Maybe and The Perfect Date. —O.L.

After a relationship turns sour and ends in a school shooting, a teenage girl is arrested for murder because she’s the only student left alive. But that’s just the tip of the iceberg with this Swedish series. Across six episodes, Störst av allt explores who was responsible for the massacre. Half high school drama and half courtroom procedural, this cerebral series is a must-watch for fans of shows like Ozark. —O.L.

The quietly addictive, slow-paced Japanese reality show that became a surprise worldwide hit for Netflix is back with a new season and a return to form. This season takes the cast to Karuizawa, Nagano, a mountain resort town known for its hot springs and winter sports. Terrace House‘s true magic comes from how different it feels from American reality TV. Aside from the high production value (everything looks like a photoshoot for a lifestyle blog), and the slow pacing, the best description for Terrace House‘s tone is sincere. For new viewers wondering how to get into the show, Opening New Doors is a great place to start. —Christine Friar

Élite tells the story of three working-class students who receive scholarships to a prestigious, expensive private school after their own school collapses. Beyond the standard drama of making friends and dodging bullies, the students must deal with a sudden murder and its ensuing investigation. Fans of high school dramas like Pretty Little Liars or Riverdale will love this trashy, high-stakes series. —O.L.