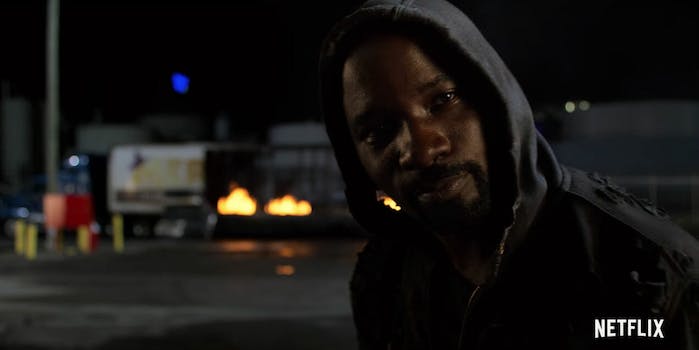 Everything we know about ‘Luke Cage’ season 2

He's not guilty. But he's not innocent, either.

When Luke Cage punched his way onto Netflix last September, he became a huge hit. The show, which received stellar reviews and praise from fans, was also significantly culturally relevant. Showrunner Cheo Hodari Coker’s now-famous saying, “The world is ready for a bulletproof black man,” became the show’s proud slogan.

The second full-length trailer Luke Cage season 2 focuses on Mariah Dillard’s role as a powerful antagonist: a politician and businesswoman, a crime boss, and a mom. Be warned, though! It’s pretty spoilery, even if it doesn’t go into specific plot details.

Now, the world is ready for season 2. In the words of Luke Cage, let’s look forward to what the future of our favorite bulletproof hero has in store.

No plot synopsis has been revealed, but season 2 will pick up after the events of The Defenders—the Netflix original series that pulled together Cage, Daredevil, Jessica Jones, and Iron Fist. Cage has now worked alongside Daredevil and Iron Fist, patching up his fraught relationship with Jessica Jones. The main impact of Defenders is the introduction of a Luke Cage/Iron Fist double-act, with Danny Rand appearing as a guest star in season 2.

Mike Colter returns as Luke Cage in season 2, alongside Simone Missick who will be back as Misty Knight. You can also count on Alfre Woodard returning as villainous councilwoman Mariah Dillard, with Theo Rossi as Shades and Rosario Dawson as nurse Claire Temple.

Luke will probably be busy dealing with a certain mysterious villain, leaving room for Luke and Claire’s relationship to be fleshed out in season 2.

On July 6, Marvel announced Mustafa Shakir (The Night Of, The Deuce) and Gabrielle Dennis (Insecure, Rosewood) have joined the cast. Shakir will play villain John McIver, a character who Marvel says is “a natural leader, brimming with charisma, whose mission is focused on Harlem.”

Annabella Sciorra has joined the cast as Rosalie Carbone, a power player in New York’s criminal underworld. That basically describes most villains in the Marvel/Netflix franchise, possibly providing a foil for Alfre Woodard’s character Mariah Dillard. Rosalie Carbone originated in the Punisher comics, as the leader of an Italian mob family.

Dennis will play Tilda Johnson, a “holistic doctor with a complicated history in Harlem where, as much as she tries to stay far from trouble, it seems to always find her.” In the comics, Johnson is known as Nightshade, a villainous scientist who uses her brains to develop sinister ways to fight her battles.

Marvel’s broad descriptions don’t tell us much about the characters’ roles in the show’s coming sophomore season. They could be villains like they are in the comics, or fit into more of a gray area. Either way, the actors are exciting additions to the lineup.

Iron Fist will have a supporting role in Luke Cage season 2, although it’s unclear how many episodes he’ll be in. While Iron Fist’s own solo series was disappointing, The Defenders managed to recreate some of the banter from the Power Man and Iron Fist comics, in which they end up as co-owners of a business called Heroes for Hire, which could evolve into a possible plot point for season 2. Bobby Fish (Ron Cephas Jones) even hinted at such an eventuality in season 1.

Hopefully, Luke Cage will keep that sense of humor, with self-aware mockery of the two heroes’ clashing personalities.

Luke Cage’s first season suffered from a lack of gender equality behind the scenes, but that will change for season 2. Blackfilm.com revealed that six women have been added to the roster of directors: Lucy Liu, Neema Barnette, Millicent Shelton, Kasi Lemmons, Steph Green and Salli Richardson-Whitfield.

Netflix released a very short teaser trailer a couple months ago. It doesn’t reveal much, but at least gets the message out there that Luke Cage will return.

On March 10, Netflix debuted an announcement teaser, which shows Luke in action as he faces fire, bullets, and an array of foes. At one point, Luke Cage is seen wearing a hoodie that features yellow (a potential nod to his comic counterpart’s costume) while another character tells him to “get paid, black man”—a likely reference to Heroes For Hire, the business that he and Iron Fist—who will appear in Luke Cage season 2—start in the comics.

“I’m Luke Cage,” he says straight to the camera. “You can’t burn me, you can’t blast me, and you definitely can’t break me.”

On May 7, Marvel debuted a full trailer that reveals antagonist John McIver, aka Bushmaster. Though Luke Cage is invulnerable, Bushmaster somehow manages to land a punch that actually draws blood. It looks like Luke has a tougher fight from another superpowered human this season.

The latest Luke Cage season 2 trailer gives us a taste of what a Daughters of the Dragon TV series might look like, as Misty and Colleen team up for an awesome bar fight.