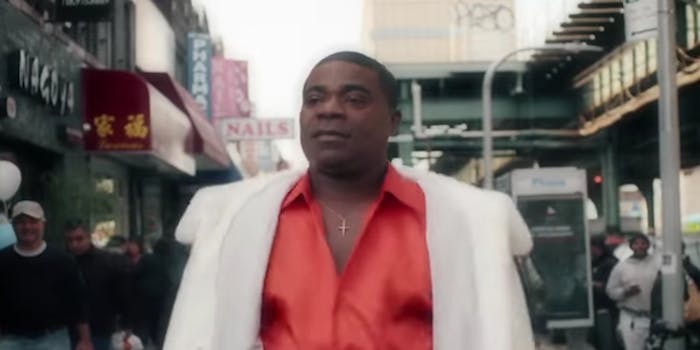 Irreverent as ever, Morgan makes light of his accident, subsequent recovery, and gigantic settlement in latest standup.

Comebacks are tricky, especially ones from horrific accidents in which the person making the comeback nearly dies. However, in Netflix‘s Staying Alive, his first special in three years, comedian and SNL/30 Rock alum Tracy Morgan consistently reminds you he’s alive and well—and doesn’t need your pity.

He was almost killed in 2014, when a Walmart truck driver, Kevin Roper, hit Morgan’s limo on the New Jersey Turnpike. Heading home from a Delaware show, Morgan suffered a traumatic brain injury and multiple bone fractures—including his entire face. Fellow comedian and best friend James McNair (aka “Jimmy Mack”) perished in the accident.

Three years later, the Brooklyn, New York, native has nearly rebuilt himself, his star arcing upward once again. Aside from his national tour schedule, the at-times controversial joker has an upcoming Jordan Peel-produced TV show coming to TBS, and this incredibly raw new special.

The hi-jinks start from the credits, when an amnesia-afflicted Morgan buys a slice in Brooklyn, then buys a fur coat with cash from his Walmart bag, a reference to his rumored $90 million settlement.

“Everybody in here know I got hit by a fucking Walmart truck,” says Morgan in his signature snarl. The truth’s unpacked and laid out bare, for the audience to accept whole.

Willing to go deep into his medical conditions, he describes being in a coma for eight days, followed by six days of blindness immediately after waking. He recalls going up to see God, his friend Jimmy Mack, and “cool” Jesus, but makes a joke about the “white light” actually being the police. Later he hilariously dips into his therapy sessions, finding humor in what had to be excruciating.

There are some jokes that wheel back to others, but the special ends up being a therapeutic session for all to see. He’ll make a wildly filthy zinger about Caitlyn Jenner: “I’ll fuck the shit out of her—I’ll get her pregnant!” Then in an instant, he’s making you laugh about his deep depression, and his wife, Megan, pulling him through the darkness.

Through the vulgarity, there’s a new softness and understanding. Morgan finds humor riffing about men being emotionally stunted. He says it in a way that more cautionary life lesson, and it’s powerful.

Perhaps that’s ultimately what Morgan wants you to know: If you’re still alive, there’s always a chance to live it better than you ever had before.