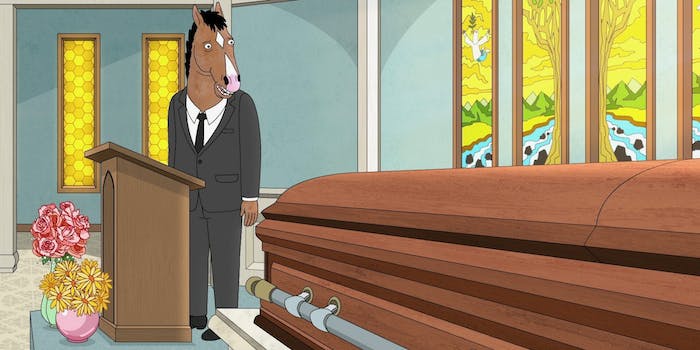 Netflix is building its own niche.

Netflix has become home to some of television’s most ambitious shows in the past few years, but while plenty of its shows have gotten recognition, it’s quietly become a go-to for great animation. And along with children’s shows like The Dragon Prince, Voltron, and She-Ra and an extensive anime collection, the adult cartoons on Netflix are leading the pack.

That’s not to say that children’s shows are only meant for them; some of animation’s greats have cultivated an audience beyond their younger target demographic. But with the success of TV shows like Rick and Morty, Archer, and Bob’s Burgers in recent years—and the enduring legacies of The Simpsons, Family Guy, and South Park—Netflix is tapping into animated series more geared toward adults.

While none of Netflix’s animated shows have yet to break out at the Emmys like its live-action programming, it’s only a matter of time. Many of its shows are critically acclaimed, and with the Phil Lord and Chris Miller-produced Hoops and Tuca and Bertie from BoJack Horseman producer Lisa Hanawalt on the way, Netflix has even more ambitious shows up their sleeves.

Nothing quite captures the existential melancholy that tends to make animated shows strike a chord better than BoJack Horseman. It’s a biting commentary on Hollywood and fame—season 5 features a character inspired by Mel Gibson and tackles the industry’s all-too-familiar willingness to forgive abusers—as a washed-up sitcom actor (voiced by Will Arnett) struggles to become relevant again.

Paired with a distinctive visual style, an all-star voice cast, and a willingness to venture into unfamiliar animated storytelling, it becomes something more. It can blend a mostly wordless episode that takes place underwater and a 25-minute eulogy with its signature humor, but even as it tackles depression, anxiety, alcoholism, and self-destruction, BoJack Horseman is reckoning with its own missteps and expanding on whose stories it tells.

Big Mouth is the kind of show that we wish we had has teenagers (but we might’ve been slightly horrified about watching it at that age years later). It’s raunchy, gross, and obscenely funny, yet it doesn’t try to sugarcoat the highs and lows (and occasional horrors) of puberty. Based on co-creators Nick Kroll and Andrew Goldberg’s teenage years, there’s a layer of realness underneath the show’s many absurdities.

Yes, there are hormone monsters, a pillow who got pregnant and gave birth to another pillow, and a Bachelorette-esque parody with contraception options in an episode that doubles as a great PSA for Planned Parenthood. It also has plenty of heart as the kids at the center of Big Mouth are about to teeter over the edge to the next part of their lives. Puberty is scary and inevitable, but it can also veer into great comedy.

Disenchantment, Matt Groening’s first new TV show since Futurama, brings us a show that doesn’t stray much from the tone and humor of his previous works. What it does have going for it is its charming voice cast (particularly Eric Andre as the demon Luci) and the depths of worldbuilding within and outside of the kingdom of Dreamland.

While initial reviews were mixed, the show’s first season ended on a cliffhanger with major implications and a wealth of possibilities. And with new episodes arriving in 2019, 2020, and 2021, Disenchantment’s fantasy world can expand even further.

The quality of video game adaptations can vary from being forgettable to being so bad it’s unwatchable, but Castlevania defies the odds. The first season centers around Dracula (Graham McTavish), who takes out his wrath on all of Wallachia with monsters after his wife is burned at the stake, and monster hunter Trevor Belmont (Richard Armitage), who’s determined to take all of it down. Add in the family dynamic with Dracula’s son Alucard on Belmont’s side, and your typical supernatural versus humanity fight becomes more complicated.

What also works in Castlevania’s favor is its length. Season 1 only has four episodes, and its second season has just eight episodes—and they’re all under a half hour. And while a third season has yet to be confirmed by Netflix, Armitage revealed that he’s already recording it.

Bill Burr co-created and stars in F Is for Family, the unfiltered and not family-friendly ’70s-set that focuses on a typical American family. With some basis in Burr’s stand-up and his childhood, it sometimes gets all too real as patriarch Frank Murphy (Burr) has a life he never wanted and a family facing their own societal expectations. Like many of Netflix’s other shows, it revels in its voice cast, which includes Laura Dern, Justin Long, and Sam Rockwell.

Tuca & Bertie, the debut show from BoJack Horseman production designer Lisa Hanawalt, starts with a moment of transition: Two best friends, Tuca (Tiffany Haddish) and Bertie (Ali Wong), who are residents of Bird Town, are no longer cohabiting. Bertie’s boyfriend Speckle (voiced by Steven Yeun) has moved in. There’s an uncertainty there, but the pulsating colors and hybrid characters of the show lift you up. This 10-episode series shares an animation aesthetic with BoJack, but that’s about it. There aren’t any crossover characters or storylines, and Tuca & Bertie is more focused on the lives of women in their 30s than one horse-man’s depressive spiral. —Audra Schroeder

A man is shot in the testicles within the first two minutes of Paradise PD, the new animated series from Brickleberry creators Waco O’Guin and Roger Black. This sets the bar and the show then blasts the viewer with every crude and lewd joke it can muster. As a parallel to Disenchantment, which attempts to make a point about gender in fantasy, or Big Mouth, which explores the horror of puberty while making deeper points about adolescence, Paradise PD is blunt-force humor without much emotional attachment. The show tries to offer some commentary on police, including a Black Lives Matter versus Blue Lives Matter standoff, but for the most part, it’s an unmanned firehose of dick and poop jokes. —A.S.

Neo Yokio is billed as the greatest city in the world, but the anime world created by Vampire Weekend’s Ezra Koenig disappoints. The six-episode series follows the story of a wealthy teen named Kaz Kaan, voiced by Jaden Smith, as he tries to navigate being a young bachelor recovering from a breakup and fighting demons that menace the city. While the star-studded cast of actors—from Tavi Gevinson to Desus and the Kid Mero of Desus & Mero—raised expectations, and the animation directed by veteran Kazuhiro Furuhashi is solid, the plot of the new series falls short. The series lacks context, plot points, and character development. The holes are so glaring that you wonder if the writers were just too focused on graceless jabs at capitalism to mention anything about, you know, the main character’s magic demon-defeating powers. —Sarah Jasmine Montgomery