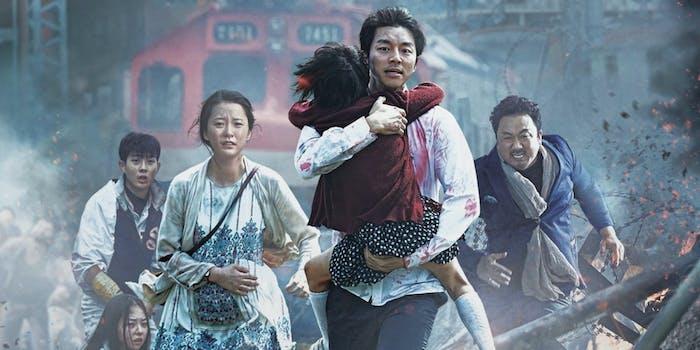 Add these Korean movies to your Netflix queue.

Looking for Korean movies? You’re not alone. Over the past two decades, Korean cinema has slowly built an American audience. Streaming services have played a large part in that, introducing viewers to modern classics like The Host, A Tale of Two Sisters, and Oldboy.

The best Korean movies on Netflix offer an excellent entry point into the world of international cinema. While Korean thrillers get the most attention, we’ve hunted down a few hits from other genres.

Whether you want a romantic comedy, horror, sci-fi, or a disaster thriller, you’ll find something worth watching on this list.

Here are the best Korean movies on Netflix right now.

Nothing about High Society’s description on Netflix can prepare you for just how freaky this movie gets. On the surface, it’s about the curator of an art gallery and her professor husband trying to join South Korea’s economic elite. What it fails to mention is the steamy sex scene—and the insanely graphic, “two people covered in lube on a plastic bed” scene. You’ll never look at social climbing the same way.

Adapted from the French comic book Le Transperceneige, Snowpiercer is directed by Bong Joon-Ho and stars Chris Evans and Tilda Swinton. It’s a surreal post-apocalyptic scenario where all surviving humans are trapped onboard a moving train, with different economic classes living on different carriages. Despite critical acclaim, the film suffered at the box office due to its limited distribution. —Gavia Baker-Whitelaw

In the oversaturated world of zombie movies there’s only one area truly left unexplored—the past. Rampant blends historical politics with the living dead in this tale of Prince, who returns home for his brother’s funeral only to discover an undead horde. Set in ancient Korea, Rampant deserves credit for both its stunningly beautiful design and vicious fight scenes. Also, this is the only zombie movie we’ve ever seen with political intrigue central to its plot. Truly, this a must watch.

Based on the short story “Barn Burning” from The Elephant Vanishes by Haruki Murakami, this psychological mystery drama is both exciting and groundbreaking. Burning was selected as the South Korean entry for Best Foreign Language Film for 2019’s 91st Academy Awards. It’s the first-ever Korean film to make it to the final shortlist for the category, solidifying it as one of the best Korean movies on Netflix.

In Burning, a novelist catches feelings after becoming reacquainted with a childhood friend. When she returns from a trip abroad with another man, an unfortunate and metaphoric turn of events leave the writer with no choice but defend his new friend’s honor, even if hers was never his to do so. —Samantha Grasso

Beginning in the 1990s, Tune in for Love relies on nostalgia to illustrate a once star-crossed romance and the power of time. Mi-su (Kim Go-eun) and Hyeon-u (Jung Hae-in) meet while working at a bakery, which Mi-su inherited from her mother. After feelings spark, the two friends attempt to reconnect over the next decade. But even under the best of circumstances, a dark secret threatens to get in their way. —S.G.

This South Korean smash hit broke audience records with over 10 million theatergoers during its theatrical run. Right as a train is departing, a woman boards, nursing a bite wound on her leg. Soon she becomes a zombie, leaving hundreds of passengers trapped on the speeding death trap as reports of a worldwide outbreak begin to spread. Exploring class issues between terrifying and gory set pieces, Train to Busan is one of the best zombie movies on Netflix—and of the last decade for that matter. Buckle in, and don’t be surprised if you feel something by the end.

Yeon Sang-ho’s follow up to the hit Train to Busan finds him yet again deconstructing a popular genre, this time the world of super heroes. Seok-hyeon develops telepathic powers after drinking water from a spring that a meteor landed in. He uses his newfound ability to reconnect with his estranged daughter, and reconnect the old fashioned way. (You know, by joining her in a fight against an evil corporation.) With incredible performances and brilliantly designed action sequences that play with the laws of physics, Psychokinesis is an adult superhero movie for people sick of capes.

South Korean thriller Forgotten is a slick, twisty yarn. It’s also a blast. Jin-Seok investigates his brother’s kidnapping. He questions everything about his own life with each new thing he learns. Nothing is as plain as it seems, and our protagonist comes face to face with long-forgotten demons. Action master Jang Hang-jun’s film is a well-executed genre exercise that delivers an emotional wallop with its thrills and jaw-dropping reveals. —E.S.

The Korean industry has established itself as one of the leaders in dark suspense cinema over the last two decades. Asura: The City of Madness continues that tradition with a horrifically violent tale about a cop caught in between internal affairs and a corrupt mayor.

Asura’s dark tone is almost oppressive at times; that makes the final explosion of action just that much more intense.

Before prolific South Korean actor Song Kang-ho was Mr. Kim in Bong Joon-ho’s latest class-warfare drama Parasite, he was the drug lord Lee Doo-sam. The Drug King details the true life story of Lee Hwang-soon, who built his drug empire in Busan, South Korea, in the 1970s. Originally a member of the Chilsung faction in Busan, Doo-sam, the fictionalized character based upon Hwang-soon, eventually grows his smuggling ring into Japan, leaving him successful but vulnerable as enemies abound. —S.G.

Lucid Dream follows journalist Dae-ho, working to find his son who was kidnapped three years earlier. Dae-ho relives the day his son was taken, through an experimental technique involving lucid dreaming. It revives an investigation that had gone cold.

For a premise as inherently grim as a parent searching for a lost child, Lucid Dream is surprisingly fun. (Think of it as a South Korean riff on Inception.) The investigations—both in dreamland and the real world—intersect in interesting ways. The story is constantly upping the stakes, making it prime for the best Korean movies on Netflix. —E.S.

American disaster movies focus largely on nearly pornographic destruction. Korean disaster movies, by contrast, are often more intimate affairs centered around people. In Tunnel, a man finds himself trapped in his car when a tunnel collapses around him. He’s left with just two bottles of water and his daughter’s birthday cake for food. He must fight to survive while rescue workers struggle to set him free. The thrills are punctuated with moments of biting satire, giving this Tunnel extra unexpected depth.

In Netflix’s Korean action thriller Revenger, many people get pummeled. There’s a cursory storyline to tie all of the pummeling together, for anyone who needs context for the thrashing. In fact, “cursory” is the best way to describe the film. The acting is good enough to sell the story, the story is just good enough to hook the audience, and the filmmaking gets the job done. But the film does have one standout aspect to it, and it’s the most important one: the pummeling. —E.S.