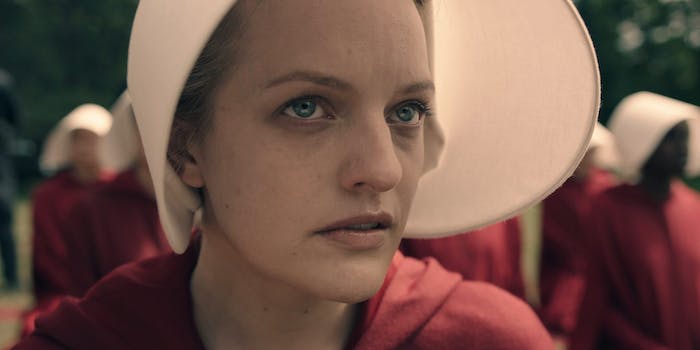 ‘The Handmaid’s Tale’ is a chilling, eerily familiar Hulu series you can’t miss

This review contains no spoilers for The Handmaid’s Tale.

The quiet horror of The Handmaid’s Tale, the Hulu series based on Margaret Atwood‘s 1985 dystopian speculative fiction novel, isn’t just in the structure and nature of the world it depicts. It’s often in the familiarity of it, which the show captures in a colorful, vivid, and discomforting adaptation that sometimes extends beyond the original tale.

First announced nearly a year ago in the thick of the 2016 presidential election, The Handmaid’s Tale has always felt particularly prescient in lieu of real-world events; all one would need to do was look at a few headlines. A state representative called pregnant women “hosts.” Rooms full of men smiled as they celebrated removing healthcare requirements for women while women donned the clothing of Atwood’s fictional characters to protest abortion restrictions being debated in the Texas legislature. The president of the United States bragged about sexually assaulting women and said that they should receive “some form of punishment” for getting an abortion.

Add in the evergreen negatives like climate change, police violence erupting at peaceful protests, a spike in attacks against people of color and Jewish and Muslim communities, and the rise of white supremacy (a point dropped for the TV series), and the comparisons become even more uncomfortable. The harrowing stories of refugees who risked their lives fleeing the U.S. for Canada come to mind when watching one of the show’s first scenes.

The fact that it resonated then—and does now, even as some of the technology has evolved since 1985—was part of Atwood’s plan to only include events in The Handmaid’s Tale that have already happened throughout history.

In the first three episodes made available to critics, we’re introduced to Offred (Elisabeth Moss), a Handmaid forced to serve Commander Fred Waterford (Joseph Fiennes) and his wife Serena Joy (Yvonne Strahovski), after her attempt to escape to Canada fails and her daughter is taken away. As one of the few remaining fertile women in the Republic of Gilead, a totalitarian theocracy that used to be the United States, Offred and the other Handmaids are forced to breed and bear children for high-ranking men and their wives after declining fertility and birthrates. Women can’t hold jobs, have their own bank accounts, or read, and they are categorized by their ability to procreate.

You don’t need to read the book ahead of time, as the show explains it in exposition scenes that don’t feel too heavy-handed—Offred is often learning it too.

As bleak as their lives might be, the Handmaids remind each other it could be worse: They could be sent to the colonies to clean up toxic waste until it kills them. They have to tiptoe even with one another, because it’s nearly impossible to tell who’s playing a part to survive; punishment can be as Draconian as Gilead itself, which has perverted roots in the U.S.’s Puritan origins. Surviving it requires an extra level of subtlety and Moss excels at it, often saying just as much with a polite demeanor or blank face as her inner monologue reveals her true, often profanity-laced feelings. At one point, during a monthly ceremony intended for procreation that takes inspiration from the Book of Genesis, she’s bored.

The Handmaid’s Tale isn’t limited by the narrative device of the novel, so it’s able to expand the roles of other Handmaids such as Ofglen (Alexis Bledel), Offred’s shopping partner who’s part of a bigger movement and knows more than she lets on. Moira (Samira Wiley), Offred’s former best friend, takes command of any scene she’s in. Moira is supportive, but she doesn’t mince words—particularly in the wake of Offred’s naïveté. She’ll call out Offred’s husband Luke (O-T Fagbenle) for his casual misogyny and isn’t even all that surprised once women’s jobs and finances are targeted.

Even Serena Joy, who’s more privileged as the commander’s wife but trapped just the same, begins to develop into a more complex character. Some of the reveals occur faster than you would expect (and some of them clunkier), but the emotional pull, for the most part, triumphs.

Handmaids dress in vibrant red, which makes it harder for them to escape without notice but they also stand out that much more when next to the Wives in light blue, the Marthas (servants) in a dull green, or the complicit Aunts who rule over them with an iron hand and tasers. It’s not just the men who enforce those laws but the women—those in charge and those who play along or truly believe in what they’re doing—do it too. In one scene taken from the book, a group of Handmaids blame another for her own gang rape, their voices echoing in the room via chant. It’s absolutely chilling.

For the release of The Handmaid’s Tale, Hulu is trying something different. While previously not a fan of the binge-watch model that Netflix and Amazon use for their original series, Hulu’s going for a compromise: The first three episodes will be released at once before switching to a weekly schedule. Although The Handmaid’s Tale leaves you wanting more, it might not be the best show to binge all at once anyway. I immensely enjoyed the episodes, watched in a single afternoon, but by the end of it I was emotionally drained. The Handmaid’s Tale is dark and devastating. It’s all too familiar but it still shocks. The terror comes within; you’ll be crushed by the extent of its cruelty—and just how much Gilead is willing to overlook as long as you can still be the host they need. And in the end it sticks with you with the potential to fuel plenty of anger to do something about it.