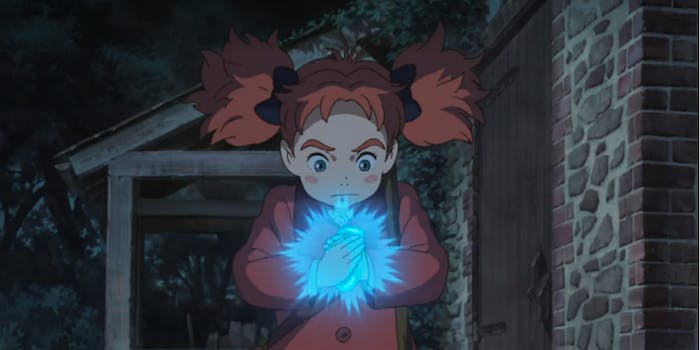 Here are the films and documentaries worth your time.

Japanese cinema can’t be defined by any one genre, but it has been quite influential in terms of producing genre-defining titles. From horror to sci-fi, animation to period drama, Netflix has a sampling of some of the best of Japanese cinema. Here are the best Japanese movies on Netflix right now.

1) Mary and the Witch’s Flower

Based on Mary Stewart’s 1971 book The Little Broomstick, it follows Mary (Ruby Barnhill), a young girl stuck in the countryside with her great-aunt. She discovers the Fly-by-Night flower growing in the woods, a rare plant that blooms once every seven years and gives her magical powers for a short period of time. With an expressive black cat by her side and a broomstick filled to the bristles with personality, Mary is transported to Endor College, a prestigious academy for witches. She meets Madam Mumblechook (Kate Winslet) and Doctor Dee (Jim Broadbent), who are almost instantly impressed with her magical ability.—Michelle Jaworski

2) The Castle of Cagliostro

You’ve likely seen The Great Wave off Kanagawa, Katsushika Hokusai’s famous Edo-period print. This animated documentary looks at his life through his daughter and fellow artist, O-Ei. It’s a sweet, meditative look at a complicated relationship—and an important part of art history—and the animation stretches from traditional to more experimental. —Audra Schroeder

Jiro Dreams of Sushi is the kind of documentary that was meant to be on Netflix. Though it was well-received upon theatrical release, it often takes the accessibility of streaming services for stories with such specified subject matter to reach a wider audience. Sushi master Jiro and his relationship with son Yoshikazu make for a fascinating portrait of the pursuit to do one thing really well. Caution to sushi fans, though: Your mouth will be watering through much of the 1:20 runtime. —Chris Osterndorf

5) In This Corner of the World

This animated 2017 film, adapted from Fumiyo Kouno’s 2007 manga, tells the story of Suzu, a young wife trying to make ends meet during World War II. Set mostly in Hiroshima in 1944 and 1945, we see the war through Suzu’s eyes, but we also see her dream life, and how she takes moments of pain and uncertainty and turns them into moments of wonder. —Audra Schroeder

Despite its flaws, the live-action Fullmetal Alchemist manages to capture the right aesthetics with its cinematography and costumes. The acting is decent, despite a few cringe-worthy moments. Fullmetal Alchemist is admittedly a complex work and a bold choice for a live-action adaptation. But the narrative is completely thrown out of whack by poor storytelling decisions that pull plot points from all over the timeline with little explanation. —Danielle Ransom

Blame! is a dark science-fiction tale that takes place in the distant future. In this future, humanity struggles to survive in a dilapidated city where dangerous machines called “Safeguards” aim to wipe out what’s left of the human race. As a result of constantly getting hunted, humanity has resorted to surviving in small, isolated groups. Killy is like a retro-futuristic version of The Gunslinger from Stephen King’s Dark Tower. He doesn’t say much, but he’s an imposing figure with a ridiculously large gun that proves to be highly effective against the Safeguards. —Dan Marcus

Fans who long for the hyper-violent days of bodies exploding during monster fights should write Netflix a thank you note for picking up GANTZ:O. In this CGI adaptation of the classic manga, a group of recently deceased people find themselves in a bizarre afterlife. Handed battle suits and weapons by an unknown force, our heroes find themselves in a brutal battle against monsters with their afterlives on the line. —John-Michael Bond