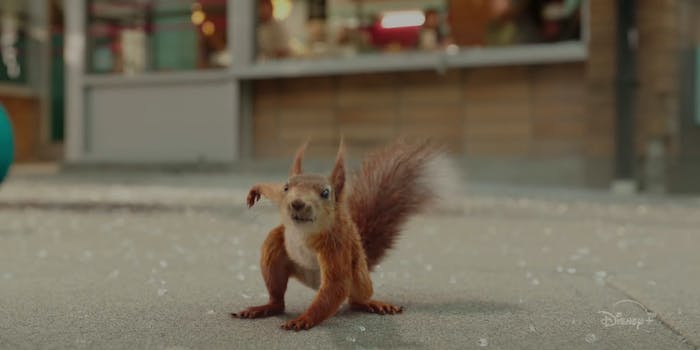 'WandaVision' rattles weekly, while a squirrel soars into action.

The second season of The Mandalorian is over. But worry not, dear streamers. There’s plenty of great, and more importantly, new movies and new shows on Disney Plus. Here’s what’s new on Disney Plus for February 2021.

Cheaper by the Dozen

Rearing a single child is a Herculean task. But raising twelve? That task just turned into a waking nightmare. Still, if your dad is Steve Martin and your mom is Bonnie Hunt, no matter what transpires is going to be hilarious. The Baker clan is equal parts charming and funny, and both movies in the series will be available this month.

Squirrels may be diseased rodents, but they are unbearably cute. Flora, cynical 10-year-old becomes friends with Ulysses, a squirrel that possesses super powers. Together, they help fix the many broken people in Flora’s life. If it sounds familiar, it’s because it’s based on a charming children’s novel by the legend Kate DiCamillo.

It’s hard to imagine a world before The Muppets existed. Jim Henson’s furry friends are pop culture mainstays, and proud members of the Disney family. Still, it’s hard to believe it all started with one charming variety show that first aired in the mid-1970s. Watching this ancient primetime hit was nearly impossible…until now.

Best New Originals and Exclusives on Disney Plus: February 2021

New episodes every Friday in Feb.

After countless delays, WandaVision finally landed on Disney Plus. The wait was worth it, as Marvel’s dive into Wanda Maximoff is part sitcom, part Lynchian trip fest. Of course, there’s also some good old fashioned action one expects from a Marvel joint. Tune in, and see what all the fuss is about.

The world of Frozen is one of the most captivating new spots in the greater Disney universe. And now, you can live it. Myth is told much like a bedtime story tale, only the experience is far more immersive. The tour starts in a simple Arendellian home. But like all Frozen productions, it turns into a full-blown adventure. All your favorite characters are there, complete with elemental spirits of air, fire, water, and earth.

Mulan, which draws from the original “Ballad of Hua Mulan,” Chinese wuxia films, war epics, and especially 1998’s Mulan, immediately stands out from its predecessors in Disney’s growing catalog of reimagined animated classics. Its grand and epic scale, stunning and vibrant visuals, choreography, and a few key performances all help instantly place it as one of Disney’s best of its lavish remakes. But it also shines in part for what it isn’t: It’s not a total copy-and-paste of the animated classic—and that’s a very good thing.

“From its very first note to its last, Hamilton is a marvel. For more than a year following its Broadway debut in 2015, the Tony, Pulitzer, and Grammy award-winning musical-turned-phenomenon, along with many of its stars, was everywhere online … Hamilton brings depths of humanity to Hamilton himself, warts and all, but the greater gift—enhanced with the care and attention that the camera gives them, as well as the book, music, and lyrics by Lin-Manuel Miranda—is the humanity that the other players, some of them larger-than-life figures whose legacy looms large to this day, receive.”