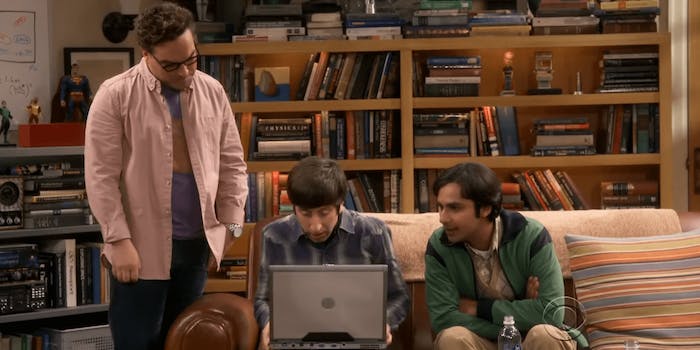 How to stream ‘The Big Bang Theory’ for free

Here's where you can stream Sheldon—both old and young—online for free.

In 2018, CBS and Warner Bros. announced that The Big Bang Theory would wrap up its 12th and final season in 2019. For long-time Big Bang fans, May 2019 marked the end of an era. However, you can still stream the show to your heart’s delight in a number of ways. Here’s how to watch The Big Bang Theory online free of charge.

How to watch The Big Bang Theory online for free

As the longest-running multi-camera TV comedy ever, The Big Bang Theory has evolved over the years, from season 1 antics to Bitcoin theories to the debut of Young Sheldon, the series’ spinoff documenting the younger years of Sheldon Cooper (Jim Parsons). Thankfully, it’s easy to check out the latest episodes either using your favorite streaming service or via CBS’ streaming offerings, all of which offer a free trial to get started.

If you’re a true fan of The Big Bang Theory, it may be worth it to invest in the network’s own streaming service, CBS All Access, launched in 2014 in response to the success of other streaming platforms like Netflix and Hulu. You’ll get access to live TV streaming and your favorite series, along with CBS All Access exclusives like Star Trek: Discovery.

With Hulu with Live TV, you’ll get live channel streaming plus access to Hulu’s full on-demand catalog of Hulu originals, documentaries, anime, and movies. You can try out the service with a seven-day free trial, which should be enough time to get through at least some of The Big Bang Theory‘s new episodes. (Here’s the complete guide to Hulu Live TV channels.) Of all the options on this list, YouTube TV is the best live TV streaming service to share. You can add up to six accounts for each subscription, and all of those come with unlimited cloud DVR, which is great because you’ll have plenty of channels and shows you’ll want to watch. YouTube TV includes ESPN, USA the CW, CNN, and plenty more. (You can find the full list of YouTube TV channels here.)

As covered above, CBS All Access is your best bet for watching full episodes of The Big Bang Theory. But there’s a catch: The service only has the 12th and final season available for streaming. For the previous 11 seasons, you’ll have to shell out some cash to download them individually, or just catch old episodes on TV. Still, at just $5.99 per month, CBS All Access offers a pretty good deal, considering you won’t find The Big Bang Theory on Netflix.

If you need to catch up on The Big Bang Theory, TBS shows reruns every weeknight and offers those same episodes for a limited time for on-demand viewing. All of the live TV streaming options above offer TBS, so you can use your subscription credentials to unlock on-demand streaming.