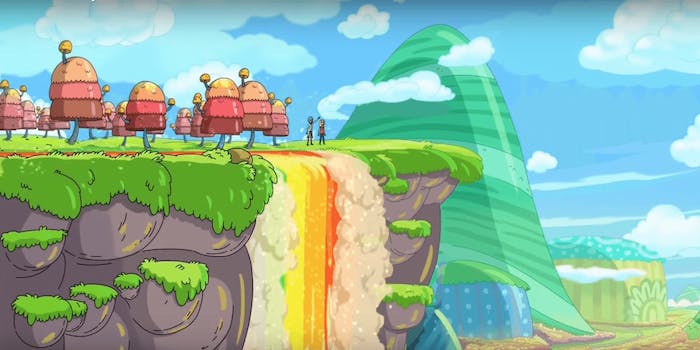 How to stream Adult Swim live for free

Get all the 'Rick and Morty' you can handle.

Where to stream Adult Swim

You no longer need a cable package and a late bedtime for streaming Adult Swim. Thankfully, you can watch an Adult Swim live stream whenever you please now and keep up to date on Rick and Morty and The Venture Bros. There are a couple of different ways to watch Adult Swim online, and they vary in terms of cost and what other services they provide. We’ve broken down the essential info to help you make an informed decision.

Here’s everything you need to know to watch an Adult Swim live stream.

What is Adult Swim?

Adult Swim is essentially Cartoon Network’s late-night block, featuring a healthy smattering of mature humor and anime. It’s the home of such crass classics as Rick and Morty, The Venture Bros., and some recent anime like Attack on Titan and FLCL Alternative. So, in case it’s not already obvious, when you’re looking to watch Adult Swim online, the channel you’re actually looking for is Cartoon Network. Adult Swim takes over the channel from 9pm-6am ET, when the kids are (hopefully) asleep.

Hulu Live TV is one of the most popular ways to stream Adult Swim live because you also gain access to a massive library of on-demand content, including classic and current TV shows, movies, not to mention Hulu’s original programming. As far as live-streaming goes, you’ll have a ton of local, entertainment, and sports channels to flip through, including HGTV, a full suite of ESPN channels, Cartoon Network, FX, and even deep cuts like Nat Geographic and Syfy.

For a more à la carte service, look to Sling TV. It offers two cable packages, Sling Orange and Sling Blue, plus a bundle. Either package offers Cartoon Network, which is what you need to watch Adult Swim, but if you grab them both (Sling Orange + Blue) you can save $15 per month. Sling Blue offers more bang for your buck with over 40 channels, including sports necessities like FS1, NBCSN, and NFL Network. You’ll also gain access to the usual cable mainstays like Food Network, Discovery, Cartoon Network, SYFY, and FXX. Whichever package you choose, you can save $10 on your first month. Here’s the complete guide to Sling TV channels.

There’s a good chance that you’re already looking to AT&T for your wireless needs. The second you sign up, you’ll gain instant access to 45+ channels, including Cartoon Network (your key to Adult Swim), local channels, and even free HBO in the Plus and Max channel suites. Plus, it comes with CloudDVR, which lets you record up to 20 hours of TV per month. One account works on two devices, but you can add more devices for only $5.

YouTube TV is a great solution for families because one subscription can add up to six accounts, and each account comes with unlimited cloud DVR. So the kids can stick to Cartoon Network and you can watch Adult Swim, even if you can’t stay up that late to stream live. You can’t beat the variety, either: There are sports channels like NBCSN, NBA TV, and four ESPN channels, while Disney, Disney XD, Disney Junior, and Cartoon Network will keep any kid (or kid at heart) busy for hours. It also comes with a few Spanish-language channels like Telemundo and NBC Universo. AMC, BBC America, and IFC are there too, so you won’t miss out on all that prestige TV. (You can find the full list of YouTube TV channels here.)

No one takes better care of their fans than Adult Swim. Its official website is streaming live all the time, even in the afternoon hours, with a completely unique block of programming. (You can check out the daily schedule here.) At any given time, there are multiple Adult Swim streams, including a nightly stream, plus non-stop marathons of individual shows. So if you’re looking for a marathon stream of Rick and Morty or The Eric Andrew Show, Adult Swim’s site has you covered. You have to log-in to chat, but most of the streams can be viewed by anyone with an internet connection.

Once the clock strikes 9pm ET, the website also hosts an Adult Swim simulcast, although it’s heavy with repeat content since it’s all designed for a late-night block of a bigger channel.  They’ve also got a Toonami stream running older anime reruns and an archive of older shows. What more could you ask for?

That said, for a large portion of the content (like a few episodes of Venture Bros. season seven), you’ll need to log in with your cable provider information. You can tell which episodes are locked by the key symbol next to their titles, and those episodes may not always be around thanks to licensing deals. Your subscription with any of the services above will suffice.

There’s also the free Adult Swim app, which works on iOS, Android, Roku, and Fire TV devices. The same restrictions apply. If you’re always traveling, or if you prefer your phone to a remote, it’s a great way to stream Adult Swim shows.