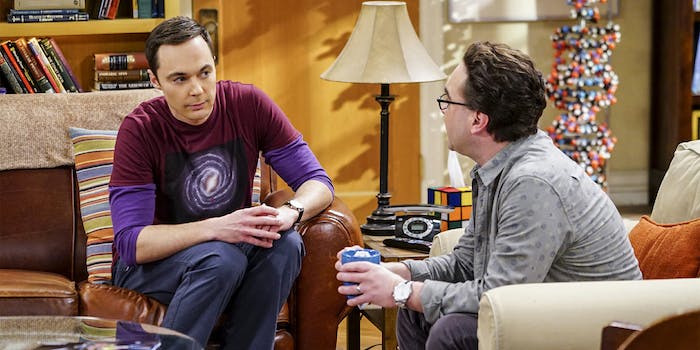 Here’s everything ‘The Big Bang Theory’ got wrong about Bitcoin

Sheldon may be a genius, he has a lot to learn about Bitcoin.

The Big Bang Theory attempted to tackle the increasingly hot topic of cryptocurrency last night, but while Sheldon may be a genius in the world of physics, he still has a lot to learn about Bitcoin.

“The Bitcoin Entanglement” follows the gang through a well-trodden (if not internet lore-based) fable of a forgotten Bitcoin fortune. Digital currency fans initially rejoiced that mainstream viewers and people forced to watch the show in hospitals and at DMVs would be introduced to Bitcoin in primetime. (The show is averaging between 12 and 17 million viewers per episode this season.) Perhaps it would lead to market gains. And, if Big Bang Theory writer Chuck Lorre and his team felt that Bitcoin deserved 19 minutes of bazinga, perhaps it was a sign that it had already broken pop culture barriers.

Instead, the episode was a lesson in “be careful what you wish for.” Over-enunciated factoids about cryptocurrencies barely covered the basics, and more often than not, lines of dialogue spread strange misinformation about Bitcoin. From a real-life nerd to a bunch of fictional ones, here are the things the show got right, and what they took severe liberties with.

At the time of this writing, a single bitcoin has reached $10,000 per coin. Of course, TV shows are written months in advance, so it would have been impossible for Lorre to predict the Bitcoin (BTC) rate. Luckily, the per-coin buy-in went higher—not lower. One issue with continuing this price-based line of thinking is that it perpetuates the idea that in order to be a crypto investor, you have to buy a whole coin. Bitcoin, and other cryptocurrencies, can be purchased in pieces and parts, all the way to the eighth decimal place. The smallest unit of bitcoin, or 0.00000001 bitcoin, is called a satoshi.

“It’s a new online currency that’s been created. It’s just like actual money, except you can’t see it, hold it, or spend it on anything.”

Sheldon’s explanation to the gang in 2010 isn’t far off, except that in 2010, Bitcoin holders could most definitely spend it on things. Outside of the dark web, a few merchants began accepting the currency, and fans of the coin (like Sheldon) would have been aware of these groundbreaking transactions. For example, a farmer in Massachusetts accepted bitcoins for alpaca socks.

“There’s a limited amount, and we find it, not by tunneling into the earth, but by using a computer to solve complex mathematical problems.”

For the uninformed, this quote from Sheldon is actually pretty accurate. BTC does have a controlled supply: Experts do not think that the number of bitcoins in existence can exceed 21 million.

Sheldon opts out of Bitcoin mining, because,“This may have some unprecedented tax implications. We may be on the phone with the IRS for hours.”

In 2010, it’s unlikely that early small-time miners declared capital gains of BTC. The value of Bitcoin was still being figured out, and crypto markets were in their infancy. Worse off, perpetuating the myth that the IRS calls citizens to demand payment only breathes life into recent IRS scams. FYI, phone calls from the International Revenue Service are unlikely. Sounds like something a nerd might know.

According to Leonard, the nerds apparently mined “a buncha” Bitcoin for a time in 2010. Bitcoin’s public blockchain ledger was started in 2009, so it’s a little bit hard to believe that the gang was already mining it the following year. But, Sheldon is a supergenius after all, and the first miners were able to use their CPUs (central processing units) on regular computers to mine coins.

Leonard and Howard “write a program” to mine Bitcoin on Howard’s laptop, again very impressive. This program appears to take mere seconds to generate the coin for the boys. At the time, however, it would take most CPUs days and massive amounts of energy to slowly build amounts of coin.

Computer programs are transferable by magic

In between shrill offstage yells from various female characters in the cast, the fellas realize that Howard’s computer keeps crashing due to the “Asian pornography” Howard has downloaded on his Dell. Leonard suggests they should use his laptop instead and plops his laptop onto Howard’s computer. You know, like nerds do. Somehow, this transfers the program and the bitcoins they are about to mine.

It’s worth noting here that private keys (long strings of random encrypted characters) are stored on hard drives and not on bitcoins. Meaning, that it would be difficult to transfer the coins via a program this easily.

Sheldon steals the coins and puts them on a Flash drive

Ok, so let’s assume that Leonard’s computer (which he gives away to his girlfriend) lacks basic security. Let’s also assume that when Leonard gives the computer away, he does not wipe any of the data off of it. In the dark of the night, Sheldon hacks Leonard’s girlfriend’s laptop and puts the coins onto a Flash drive. It’s worth noting here that in this process, a copy of the coins would still be stored on the physical laptop. In order for the coins to not be available on the laptop, Sheldon would have had to create a new wallet saved on the Flash drive and move the coins onto that wallet, and that transaction would have been shown on the old wallet.

Even more curious, why didn’t Leonard and Howard write down the encrypted keys that would allow them to restore their Bitcoin wallets when the currency was mined? Even in 2010, this was the strongest protection against hackers and lost data. When Sheldon downloads the gang’s bitcoins onto a USB stick, he would have to know these private keys. If you can get past that, even though Sheldon has a photographic memory, he doesn’t bother storing a backup of the wallet and loads it onto an easily lost Flash drive connected to his friend’s keychain. All of this seems unlikely.

In the episode’s finale, Stuart, the comic book store owner, finds Leonard’s Batman flash drive on the floor of his shop. Unbeknownst to Stuart, that USB contains “a buncha” Bitcoin. In real life, those bitcoins would be encrypted and would require a password to wipe the data. Stuart claims he’s going to clean the USB and sell it for $10. But without a password, even one that Sheldon created, this is far-fetched. And, even if Stuart succeeded at wiping the drive, Leonard and Howard’s bitcoins can be claimed if they can simply find their private keys.

Gains from this widely watched episode have yet to be seen on the markets. And overall, it’s hard to believe that a genius like Sheldon, who has apparently made strides in the field of physics, can’t find anything interesting about Bitcoin’s technology besides seeing it as a practical joke and a way to ire the IRS.