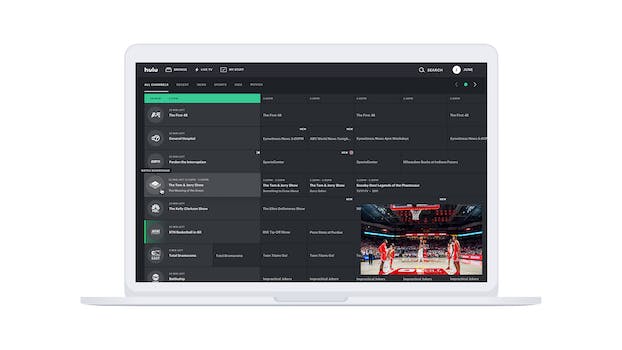 Cutting the cord doesn’t mean you have to say goodbye to live television. If you’re shopping for a streaming service that’s contract-free, Hulu Live TV costs are affordable. Plus, you don’t have to settle for catching your favorite shows weeks later. What channels are on Hulu? Tons.

In addition to the standard library of on-demand Hulu originals, shows, and movies, Hulu Live TV includes, well, live channels. So you don’t have to avoid social media the night your favorite show comes on and you can actually catch the game live.

Of course, whether it’s right for you depends on the live channel. What channels are on Hulu Live TV? See below for packages, pricing, and whether the streaming service carries your preferred networks with a handy Hulu Live channel list.

What channels are on Hulu Live TV?

How many Hulu Live TV channels are there?

Hulu Live TV offers 65+ channels in one easy-to-use plan. The exact number of channels depends on what market you’re in and which local channels you can access. However, taking a look at the Hulu Live TV channel list, you’ll find plenty of options.

Finally, Hulu Live TV brings its A-game for adults just looking to relax. You get your broadcast favorites like ABC, CBS, FOX, and NBC. Looking for prestigage TV? FX, Lifetime, SyFy, TNT, and The CW await. In addition, there’s even news spanning the political spectrum from MSNBC to Fox News.

All of the major live TV streaming options now offer local channels in most major cities, but what you’re able to watch varies by location. Thankfully, there’s an easy way to find out what your package would look like. Just type in your ZIP code when prompted here.

One thing that puts Hulu above its competitors is the wide range of ABC availability. Since it is owned by Disney, it’s unsurprising that ABC is available in more than 140 markets. So if you’re part of Bachelor Nation, it’s a great option.

How much does Hulu Live TV cost?

Hulu Live TV costs start at $64.99/month. The basic package comes with nearly 70 channels and the full Hulu library, including brief ad interruptions. You can upgrade to no ads on Hulu’s on-demand content for $70.99/month, however, you will still find ads on the live channels. (Networks gonna network.)

Hulu Live TV can also be bundled with ESPN+ and Disney+ for one of the best deals in streaming for $71.99 per month. That gives you sports, live TV, along with Hulu and Disney+’s amazing libraries.

If that’s not enough entertainment options for you, there are standard channel add-ons that cost $7.99 extra per month. Then, premium add-ons like HBO, Starz, and Showtime are also available, which are priced upwards of $8.99 extra.

You can stream up to two devices simultaneously with the basic Hulu Live TV package, or get unlimited screens for an additional $9.99 a month.

Another great feature of Hulu Live TV is the addition of premium movie channels. In addition to streaming TV, you can add bonus movie options like HBO Max, Showtime, and more. As a result, Hulu is one of the most customizable options available for movie fans.

Does Hulu Live TV have any add-on channel packages?

Besides the 65+ channels that comes with Hulu Live TV, subscribers can add extra channels with ease. More specifically, Hulu offers a $7.99 per month package with 11 additional Hulu TV channels. This package, called the Entertainment add-on, delivers a mix of news, crime, history, and finally, family cooking.

In other words, the Entertainment add-on is a great way to expland your family friendly TV pacakge without breaking the bank.However, if you can only pick one add-on we might go with a movie channel.

Hulu has an add-on package targeting Spanish-speaking and bilingual families. In addition to normal live TV service, for just $4.99 per month, subscribers can add the en Español package.

The service can be streamed using any of the following devices, and there’s no limit to the number of devices you can connect to your account: Roku, Apple TV,Google Chromecast, Amazon Fire Stick and Fire TV, Xbox One, Xbox 360, Nintendo Switch, and iOS and Android devices.

However, it’s worth noting, with a basic subscription, you can only stream on two devices at a time. For $9.99 per month, you can unlock unlimited screens in your home and three on mobile. If you’re planning on sharing the account, it’s practically essential.

And if you add unlimited screens, you can tack on 200 hours of enhanced cloud DVR (and the ability to fast-forward through all recorded content) for just $5 more per month; otherwise, the cloud DVR feature costs $9.99 per month.