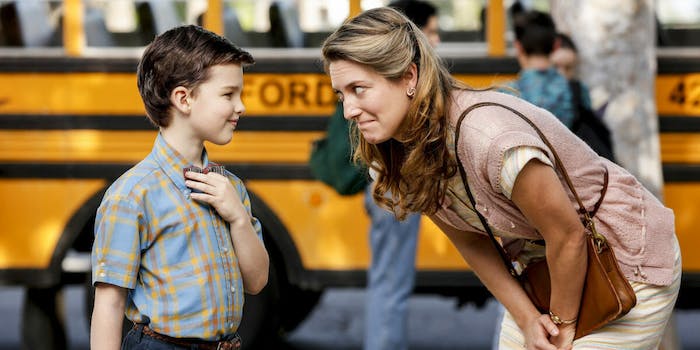 It's a much different Sheldon than we're used to seeing.

CBS gave us our first look at Young Sheldon at CBS’s upfront presentation Wednesday, the Big Bang Theory prequel centering around one of the sitcom’s most distinctive characters.

The Big Bang Theory has now been on the air for 10 years, and remains one of TV’s most popular shows. It returns this fall, but CBS has already started to branch out with a spinoff that already received a series order in March. It follows 9-year-old Sheldon Cooper as he starts high school and his family—his parents, his older brother, and twin sister—in 1989 East Texas. Jim Parsons, who plays Sheldon in Big Bang Theory, narrates parts of the trailer.

Young Sheldon has hints of late-80s nostalgia, and your feelings on the show will probably depend on how you feel about Big Bang Theory and Sheldon Cooper himself, who is rather polarizing among viewers and geeks. And 9-year-old Sheldon, who is the first to call out rule-breaking and question the qualities of his teachers, has a long way to go before growing into the more relaxed version of Sheldon we’ve seen on TV. Starring Ian Armitage (Big Little Lies) and Zoe Perry (The Family), the latter who is the daughter of Laurie Metcalf, who plays Sheldon’s mother in The Big Bang Theory, it also has a much different feel than the traditional sitcom and shows the potential for heartfelt moments.

Young Sheldon will air a “preview” episode on Sept. 25 before debuting in its regular timeslot Thursdays at 8:30pm ET on Nov. 2 after The Big Bang Theory.