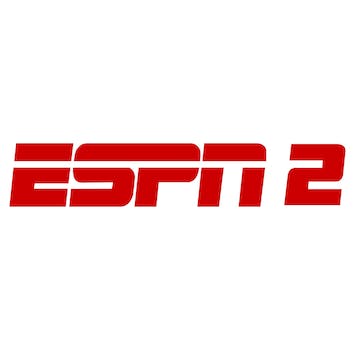 How to stream ESPN2

Turns out Ricky Bobby was wrong. Just because you’re not first doesn’t mean you’re last. ESPN2 is a living testament to that. The secondary channel is nearly as essential as ESPN itself, offering up countless live games across all the sports you care about, and replays of your favorite ESPN programs like SportsCenter. Here’s everything you need to know to find an ESPN2 live stream.

Where to stream ESPN2

Launched in 1993, ESPN2 was originally designed to be a more youth-centric sports network, and it showed in its graffiti logo and the graphics that ran over shows like SportsNight with Keith Olbermann and more extreme alternative sports coverage, like snowboarding and lumberjack logging.

By the late 1990s, the youthful angle began getting phased out for more mainstream coverage, allowing the overall ESPN brand a secondary channel for what was certainly an overflowing schedule. Now on ESPN2, you can find games and matches from the MLB, Major League Soccer, NCAA football and basketball, and even NASCAR on ESPN2. It’s also essential for streaming college football.

ESPN2 live stream: How to watch ESPN2 online for free

If you have a way to watch ESPN online, chances are you can also stream ESPN2. The channels tend to be packaged together on most of the major live TV streaming services. The exception is FuboTV, which doesn’t offer any ESPN channels. Here are your best options for an ESPN2 live stream and what you need to know about each one.

ESPN2 on Hulu with Live TV

FuboTV was built from the ground up with sports fans in mind, so it’s ideal if you want to watch ESPN2. There are different channel packages available whether you’re looking for basketball, soccer, golf, or even outdoor sports like rock climbing. But no worries, all the great cable channels you’re after are here too, including Viceland, Bravo, and IFC.

Vidgo offers a package for under $40 a month that pulls together more than 60 English-language channels into its National English Package, including ABC, Fox, the Disney family of channels, ESPN2 and the entire ESPN family of channels (including ESPN Deportes), FS1, FS2, Fox Deportes and BeIN Sports. It offers an array of entertainment favorites, including A&E, HGTV, History, Lifetime, and a full range of Nickelodeon channels, including TeenNick and NickToons.

Other ways to watch ESPN2

If you’re want to watch ESPN2 on desktop, you can always do so from your web browser. ESPN recommends that you run the latest version of Chrome, Safari, Firefox, or Explorer, and that you have an internet speed of at least 2 Mbps. (For a full list of system requirements, go here.) You’ll find all of the live ESPN2 programming under the Watch tab. Just press the play button on the video player, and you’ll be prompted to enter your login information. ESPN accepts DirecTV Now, Hulu, Sling TV, PlayStation Vue, and YouTube TV credentials in addition to standard cable providers. Just select which one you use from the list, put your information in, and you’re set.