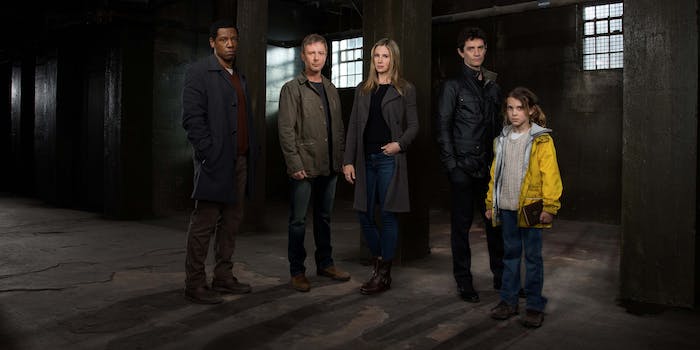 Your guide to BBC America’s ‘Intruders’

The Internet sure loves a good mystery.

The Internet sure loves a good mystery.

With the popularity of True Detective, Orphan Black, and even Game of Thrones—along with the Purple Wedding, remember trying to figure out who killed Jon Arryn back in season 1?—over the past few years, we love to dig deeper than what we see on the screen and try to get to the bottom of whodunit. And it’s not just the question that drives people: It’s the motive, the endgame, and just what makes a character tick, the pieces that can’t be satisfied with your typical broadcast procedural drama.

We just don’t like being spoon-fed the answers anymore.

Intruders, the newest show from BBC America, involves a secret society, a mysterious number that keeps reappearing, characters who aren’t what they seem, the dark and often gloomy weather of Portland and Seattle, and a shroud of mystery ripe for Internet sleuths—and that’s just the first episode.

Premiering Aug. 23, it’s taking the post-Doctor Who slot in the TV schedule with hopes that people will stick around once they catch the last glimpse of Peter Capaldi for the week. It’s difficult to categorize into one specific genre. It’s got hints of horror, crime, thriller, suspense, and even science fiction, many at play simultaneously in a single scene. With only eight episodes in the first season, the first episode is a fast (and at times, overwhelming) flow of necessary information, but things dial down in later episodes as the show has time to focus in more on plots.

But in case you’re deciding whether to check it out (or you’ve already seen the first episode and still find yourself a bit confused), we’re here to break it down for you. (Don’t worry; we’ll still leave plenty of mystery for you to parse.)

Intruders is based on the 2007 novel The Intruders by Michael Marshall (pen name Michael Marshall), and it follows a group of people who initially seem unconnected, but as the story unravels, it delves the intricacies of a secret society and the key to immortality.

In the first few episodes, we follow Jack Whelan, a former-cop-turned-author with a dark past, who’s asked by Gary Fisher, an old friend, to help him with a case. Soon after, his wife, Amy, goes missing. Madison O’Donnell, a 9-year-old girl, isn’t acting like herself at all and leaves a trail of violence and death in her wake. Richard Shepherd, a mysterious man in a secret society, is determined to stop the truth at any cost, no matter how many bodies he leaves in his wake.

People may die, but their souls can live on, and all of them seem to be haunted—or invaded—in one way or another.

One of the less pleasant aspects of adaptations (for fans, anyway) is when the original creator despises it, causing feelings of unease or tension among book fans and TV/film fans.

But Smith, who has seen the first three episodes, has been very supportive from the get-go. Originally, the BBC was interested in adapting his work, but things fell through after the network failed to move the location of the story to the U.K., leaving it for BBC America to pick up.

Smith, like many authors, is super-protective of his work, especially when it comes to TV and film adaptations, and he said that if Intruders sucked, he would’ve said so—loudly.

“I couldn’t be happier, too, with the ballsy way in which Glen [Morgan], Jane [Tranter] and Julie [Gardner] have allowed the mystery to take its time,” he wrote on his blog. “The thing that saved the television industry, and has raised it so far above movies in the quality and depth of its output, is this willingness to engage with viewers as adults, to expect an attention span and use it to tell a story in the way it’s meant to be told.”

Although he’s not going to be writing any episodes for the show anytime soon, he’s been pleased with what he’s seen so far.

Intruders has a host of familiar faces, but viewers will also be meeting many for the first time.

Doctor Who fans are sure to recognize the show’s Jack Whelan, played by John Simm with an American accent, who charmed and scared the crap out of us as the Master. In one way, he’s the heart of the show because he’s often left as confused as the rest of us, and in the beginning, his story is the most straightforward: His wife is missing, and he’s trying to find her on his own.

The show has some star-studded Oscar power with Mira Sorvino, who many will know from Romy and Michele’s High School Reunion and Mimic, but she’s also dabbled in sci-fi recently with a stint on Falling Skies. As Amy, she’s both haunted with a yet-to-be-revealed past while sharing her body with another.

Whenever James Frain is on the screen as Richard Shepherd, you can’t look away. He’s ruthless, except when it comes down to the one thing he absolutely needs to do, and he gives dimension to a character who could easily be just your regular assassin.

By far the one to keep an eye out for is 10-year-old Millie Bobby Brown, who plays the 9-year-old Madison. In three episodes she’ll impress you, creep you out, scare the crap out of you, and at one point in the pilot, make you turn away from the TV, but she’s not your typical creepy girl from horror films. At times, she’s portraying both a scared young girl and an older man set out on revenge, and in other hands, it could’ve been disastrous. With Brown, she’s one of the most interesting people on the show.

Qui Reverti, the secret society at the center of the show, is shrouded in its own mysteries. Many of the people as part of it (living or souls intruding upon another living body) often say, “Because in the beginning, there was death.”

The calling card, along with the society’s bible or guidebook, is emblazoned with the number nine, and if you look closely enough, you could probably see it scattered throughout the episodes (although maybe not to the level that Lost did with its mysterious numbers).

There’s something to be said about them, and Smith and the stars are more than happy to play along on social media.

It all adds up #intruders pic.twitter.com/z4CbAM4fe8

What goes around, comes around. #INTRUDERS Premieres 08.23.14 on @BBCAMERICA. pic.twitter.com/nPRY990beo

Much of the how and the why are still up in the air, and we don’t know all that much about Qui Reverti. Book readers may have to bite their tongues for this one, but if there’s a will (or a telling frame to latch onto), the Internet will find a way.