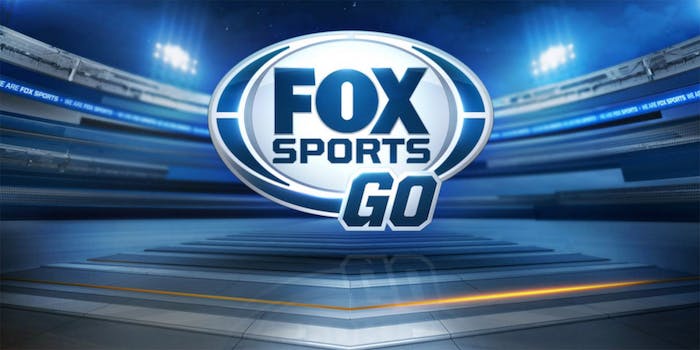 Fox Sports Go will help you catch your local teams in action.

Fox Sports Go is a must if you’re looking to stream any of your hometown teams airing games on Fox Sports regional networks. It also carries some additional sports programming.

All you have to do, after downloading the app or visiting the Fox Sports Go site, is enter your credentials. That will remove the key icon you see above, indicating the content that requires a subscription to unlock. The app and site will automatically load with the channels available in your area. You also get access to replays, highlights, and select shows.

The app works with most streaming devices, including Roku, Apple TV, Google Chromecast, Amazon Fire Stick and Fire TV, XBox One, and iOS and Android devices. (This list includes the full technical specs.)

The Fox Sports Go app is free to download. However, you’ll need a cable or live TV streaming subscription in order to unlock the vast majority of the content you want to watch, including all of the live streams. That means the true cost depends on your service provider. Hulu, AT&T, and YouTube TV will work, each of which includes a free 7-day trial if you’re in a pinch

The key to maximizing your Fox Sports Go app is unlocking your regional network. Here’s a breakdown of all of the live TV streaming services that will set you up.

Hulu Live TV’s sports coverage includes the full suite of ESPN channels (including ESPN2, ESPNews, ESPNU, and ESPN College Extra), FS1 and FS2), NBSCN, the Olympic Channel, and the Big Ten Network. Hulu’s also got you covered for news and entertainment in its nearly 70-channel package. Your Fox Sports regional network depends on what market you’re in.

At its most basic Plus tier, you can find sports staples like ESPN, ESPN2, and FS1. Considering that AT&TV TV Now plans include the loaded Xtra, Ultimate, and Premier tiers, as well as the Spanish-language Optimo Mas package, you can find whatever sports channel you’re seeking in at least one of the AT&T TV Now plans. If you’re looking for a Fox Sports regional network, start at the Xtra level, though at the Premier level, you can get all the regions.