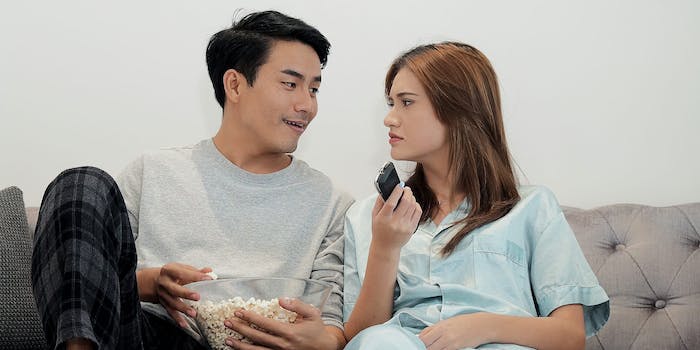 The best ways to stream TV shows and channels for free

Cut the cord without breaking the bank.

We’re living in a streaming revolution. Thanks to on-demand services like Netflix, Hulu, and Amazon Prime, it’s never been easier to cut the cord. But if you’re looking for free live TV, you’re going to have to get creative. Hulu with Live TV, Sling TV, DirecTV Now, YouTube TV, FuboTV, and PS Vue all offer live TV streaming packages that replicate cable, but there’s a hefty significant price tag associated with each one.

Thankfully, there are tons of streaming apps for TV fans that don’t cost a dime. Whether you’re looking for free TV channels or just a way to watch some TV online for free, we’ve collected your best options below. We’ve broken your free TV streaming options into a few categories: free TV apps, free live TV, and free TV shows.

ABC’s app is perfect for viewers who are trying to keep up with their favorite shows on the network. Once you download the app, you’ll be able to watch the most recent episodes of ABC’s biggest shows, along with a selection of classic hits, all for free. Episodes of Black-ish, Dancing With the Stars, and Modern Family all await, provided they’ve recently aired on ABC proper. Some of ABC’s content requires you to log-in via a TV provider to watch. These shows, however, are marked with a key, and there are there are still hours of free content to enjoy.

NBC was once known as the home of “Must See TV,” but for budget-minded cord-cutters, it’s also the home of “Great Free TV.” Like its peers, NBC works with free users, unlocking new episodes of its shows eight days after they air for free streaming. Catch up on This Is US, Saturday Night Live, and Will & Grace, along with a slew of their current and classic shows. Some content is locked behind the dreaded Key, but NBC goes further than its peers by letting app users who register watch any three locked episodes for up to a month for free without a login.

When it comes to melodrama, no one does it better than the CW. It’s cornered the market on live-action superhero TV with its Arrow-verse of DC Comics shows while making people care about Archie again on the hit Riverdale. Now you can catch up for free on the CW’s streaming app. The episodes that are available at any given time depending on when they last aired on the network, so if you want to binge Riverdale, you’ll need Netflix or to wait for reruns. One area the CW reigns is how quickly it puts up content. While other apps make you wait until the next day or even a week, the CW puts its latest episodes up at 11pm PST on the night they air.

Children of all ages rejoice! Cartoon Network has opened its doors with a generous selection of free programming on its app. Watch full episodes of shows like Steven Universe, Adventure Time, and Uncle Grandpa without needing to log in. Once you’ve binged all the available episodes, dive into the wealth of clips and app-exclusive content Cartoon Network as included. Given that Cartoon Network itself is locked behind the paywall of cable, this app is an absurdly generous gift for cartoon fans. As with the ABC app, you’ll be able to identify locked content by a key icon.

The downside of living on a budget as a parent is knowing you might be missing out on valuable content for your kid. That’s why PBS Kids’ approach to streaming is so remarkable, giving a free 24/7 feed on its app without a subscription or login required. With safe and educational programming updated every Friday, PBS Kids is there whether you’re on a mobile device or streaming stick. Along with its live programming, PBS Kids offers on-demand streaming, plus guides to let parents know a show’s intended age group and learning goals.

Anime fans no longer need to scour YouTube to get their fix, thanks to Crunchyroll. Fans can stream standard-definition episodes of almost the entire Crunchyroll catalog with its ad-supported free mode. This includes hundreds of episodes of fan favorites like One Piece and Dragon Ball Super, alongside currently airing shows like High School DxD Hero and Sword Art Online: Gun Gale Online. If you remember the days when anime was only available via expensive DVDs and tapes, Crunchyroll will bring a tear to your eye.

All of the options listed above are incredible, but they don’t really replicate the sensation of watching live TV. Sure, you see the shows, but you can’t exactly channel surf. Enter Pluto TV, a true streaming live TV alternative that will fill the TV-sized void in your life. Pluto TV provides over 100 channels of live TV, movies, and music. The channels are grouped by categories like News, Sports, and Entertainment, with each section stocked with high-quality channels you might not recognize and a few you do. For example, under News, there’s a feed of MSNBC content. Pluto TV really shines with its oddball channels like Slow TV, which is just a feed of things peacefully moving along. Pluto TV is highly recommended for people who love TV but don’t have any must-see shows. (Here’s our complete breakdown of how Pluto TV works and Pluto TV channels.)

One of the significant downsides of not being able to pick up a TV signal from a digital TV is the loss of local news. During a local event or weather emergency, local channels are an invaluable resource. NewsOn allows you to choose from live newscasts from around the country without paying a dime. Even from a pure entertainment stand point, local news broadcasts provide plenty of laughs.

Just because a channel isn’t showing first-run content doesn’t mean it can’t open you up to a host of great TV shows. Here are the best free TV streaming apps for budget-minded cord-cutters. 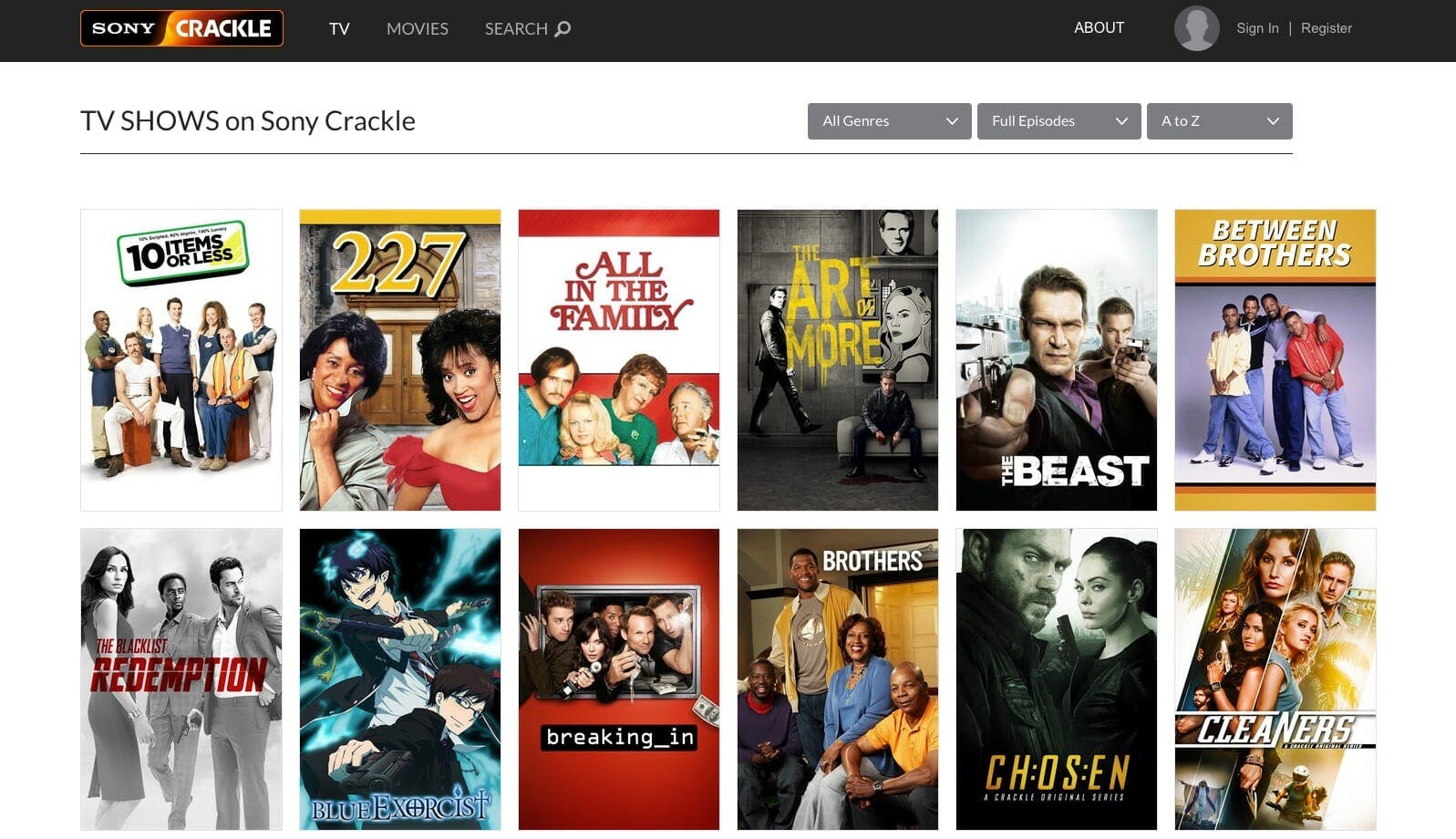 Crackle is an on-demand streaming service like Netflix or Hulu, except it’s completely free. Its library includes plenty of finished TV shows and movies, many of which rotate out on a monthly basis. (Here’s our regularly updated guide to the best movies on Crackle.) But Crackle has also been producing its own original content, like the original series Snatch and StartUp, which are just the sort of edgy content that will make you miss HBO a little less. Whether you want to watch reruns of Community and Seinfeld or you’re looking for a good movie, Crackle is worth a closer look.

Tubi TV is mostly just another version of Crackle, minus the original content. With a catalog that contains over 7,000 movies and TV shows, you’ll never run out of things to watch. Tubi TV’s library is largely made up of old sitcoms and reality TV shows, but there are binge-worthy gems like Dog the Bounty Hunter, Rock of Love, The FBI Files, and even anime titles like Bleach. Interestingly, Tubi TV’s movie listing is its best feature, with blockbuster titles like Valkyrie and Universal Soldier. There are high-quality documentaries (Soaked in Bleach), brutal horror (Lords of Salem), and touching romances (The Taste of Others) for those who take the time to dig.

From cheating spouses to out of control teens to polyamorous satanist triads, daytime TV is the ultimate guilty pleasure. Nosey compiles the best of daytime tv into one easy-to-use streaming service. All your favorites are here: Maury Povich, Jerry Springer, Paternity Court, Cheaters, and more. There are even game shows like Family Feud and Press Your Luck. Don’t let a lack of an antenna or cable box keep you from daytime gold. Enjoy it all with Nosey.