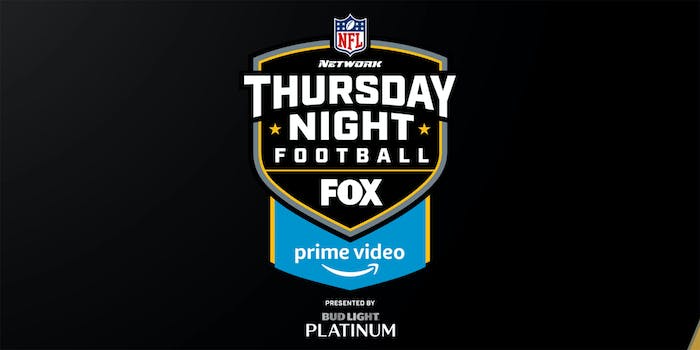 If you love the NFL, Thursday night is one of your nights!

Stream Thursday Night Football to start Week 14 of the 2020 NFL season for Patriots vs Rams.

The Patriots vs Rams Thursday Night Football matchup will stream live on NFL Network as in prior weeks, but now Fox and Amazon Prime Video are in the mix.

To stream the rest of the Week 14 schedule, you’ll want access to CBS, Fox, and ESPN.

There’s also a Sports Extras option for Orange + Blue subscribers, with MLB Network, NBA TV, and NHL Network part of the plan. There’s also a Sports Extra add-on for the Sling Blue package, and another one for the Sling Orange package. Sling Blue also allows you to stream Thursday Night Football via Fox, though you want AirTV to be sure you get all your local channels.

The Fubo channel list still includes plenty of sports, including the Fubo Sports Network, which has original programming mixing sports and humor. Fubo added the ESPN suite of channels in an agreement that also brought ABC and the Disney Channel. Pretty much every sports channel you could think of is available through Fubo, including BeIN Sports, CBS Sports Network, and TUDN. NFL Network is available at the Standard, Family, or Elite levels.

It’s a great option for sports fans. It comes with ESPN, ESPN2, FS1, FS2, NFL Network, and NBCSN at the ready. Deeper sports cuts, like NBA TV, MLB Network, CBS Sports Network, and ESPNU are also part of the YouTube TV plan. For $10.99 more a month, upgrade to the Sports Plus plan to get NFL RedZone and six additional sports channels.

Stats don’t tell the whole story: Cam Newton only managed 69 yards through the air last Sunday, but ran for two touchdowns to jump-start the Pats to a 45-0 rout of the Chargers. Gunner Olszewski had a punt return touchdown and a receiving touchdown to contribute to the lopsided final score.

The Rams also got a win last weekend, beating division rivals the Cardinals 38-28 in Glendale to improve to 8-4 on the season. In that matchup, Jared Goff went for 351 yards passing, and Cam Akers was the latest standout in the Rams’ running back carousel with 72 yards rushing and a score.

According to BetMGM on game day, the Rams are 4-1/2 point home favorites, with an over-under of 44.5.