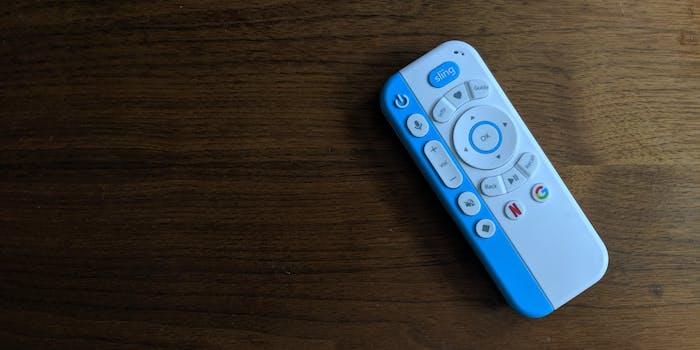 We put it to the test.

AirTV fixes the biggest problem with Sling TV. The streaming media player allows you to port your local broadcast channels into Sling TV’s interface, an incredible convenience for cord-cutters, but is that enough to justify its hefty price tag? That depends.

AirTV offers two distinct products. The basic AirTV is a dual-tuner streaming device that costs $79.99. What’s remarkable about the product is that it not only allows you to incorporate your local channels into Sling TV on your home TV, but you can actually access them remotely from your smartphone, laptop, or anywhere else you might access the Sling TV app. It’s practically magic.

By contrast, the AirTV Player, which runs $119.99, is basically an upgraded Chromecast. In fact, it has Google Play and Chromecast functionality built-in, as well as Netflix preinstalled. That means that you can download apps like Starz, HBO Now, and FuboTV, and control them all with the included AirTV remote. Interestingly, while the AirTV Player offers Sling TV integration, only the basic tuner allows you to access your channels remotely.

No matter which one you choose, you’ll still need to buy an HD antenna. AirTV upgrades how you access local channels, but neither one of the products actually picks them up. Likewise, both products offer the ability to record local channels with DVR, but that’s only if you attach an external hard drive to record your programs onto. (That means you won’t be able to use Sling TV’s cloud DVR function—a $5 per month upgrade—to record your broadcast channels, which makes sense. That would be an incredible workaround.)

Both AirTV products make more sense as Sling TV accessories than as standalone products. Sling TV’s most glaring issue is its lack of local channels. The service only offers Fox and NBC channels, which means you need another solution for ABC, CBS, the CW, and Spanish options like Telemundo. Having spent well over 100 hours streaming on Sling TV, I can confidently say you’d be surprised how often you miss those channels.

Other leading live TV services don’t have this issue—or at least, not to the same degree. Hulu with Live TV, YouTube TV, and PlayStation Vue all offer robust local channel offerings. While some specific networks might not be available in your area, you’re still going to have better options than Sling TV. I can’t watch ABC live with Hulu, for example, but the service offers all of the channel’s content the day after it airs on-demand.

You can use an HD antenna to fill in those gaps, of course, but that doesn’t help if you’re trying to stream from your phone. And while most of those channels offer their shows via free, ad-supported apps, they’re of little use if you want to watch live sports or catch The Bachelorette in real time. (CBS All Access, the network’s new subscription service, offers live streaming and exclusive programming like Star: Trek Discovery and The Twilight Zone reboot for $4.99 per month.)

At this point, I’ve spent considerable time with both products. I picked up a total of 43 channels, which included two CW channels and five different PBS offerings. The latter is particularly notable given that PBS is not available to stream on any of the major live TV services.

I used the AirTV Player specifically to watch all of the 2019 NBA Finals. The set-up was relatively straight-forward, and ABC came through in crisp HD. The quality wasn’t any different than if I had just used my HD antenna directly—a Mohu Leaf Metro, by the way—but I did appreciate the convenience of being able to navigate from the Sling TV app.

My wife did not. That’s because our Samsung QLED TV already came with the Sling TV app, but in order to access local channels, you have to select the AirTV Player from the device manager and use that version of the Sling TV app. It’s a little more complicated than it needs to be, especially if you’re trying to explain how it works to a babysitter. (Otherwise, local channels integrate with Samsung smart TVs in a section called Live TV Air, which includes all of Pluto TV’s free live programming, though it’s not billed as such.)

There are other perks to the AirTV Player, though. It’s great anytime you need a quick way to cast something to your TV, and if you’re not using a Samsung smart TV, I imagine it would be really helpful to have a device in which you can download apps or stream Netflix—and to have a remote to do so. Of course, you could just buy a Chromecast and save a significant chunk of change (to say nothing of the Amazon Fire Stick or entire Roku line of products).

I found the more affordable AirTV dual adapter to be more useful, and I think most users would agree. That’s because we expect to be able to take our content with us. We’re less tethered to our couches these days, and being able to access your local channels from halfway across town (or the country) is quite appealing—especially when you can pull PBS, the CW, and all sorts of other channels you might not expect.

But I ran into an unexpected problem with the AirTV dual adapter. While I could watch local channels in the Sling app on my phone (a Pixel 2), I couldn’t on my home TV (a Samsung QLED). That’s because AirTV is only compatible with Amazon Fire devices, Android TV, Roku, and iOS and Android devices. I could’ve dug up my Amazon Fire Stick, downloaded the Sling TV app, and streamed local channels that way, or I could’ve plugged in my old Chromecast and tried to cast from the Sling TV app on my phone to the TV, but both options seemed like more trouble than they were worth.

It’s a shame the AirTV Player doesn’t offer mobile viewing. That would make it clearly superior.

Should you invest in an AirTV? The better question is: How committed are you to Sling TV?

Sling TV certainly has its advantages: It’s a budget-friendly service and the best option for live sports. But Sling TV’s top competitors provide better access to local networks and allow you to stream those channels remotely—without any additional equipment.

As for me, I unplugged both AirTV devices and reconnected my HD antenna directly into my TV. Sometimes the simplest solution is the best one.

For a limited time, Sling TV is offering a free RCA HDTV indoor antenna an AirTV Player when you sign up and prepay for three months of service.