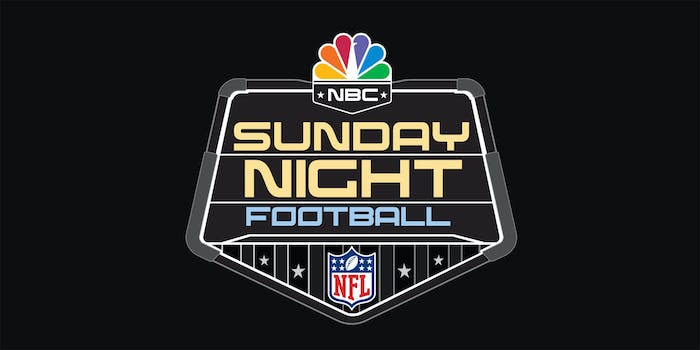 If you've been waiting all week for Sunday night, this is probably why.

Here’s how to stream Sunday Night Football, featuring the Titans vs. Packers for an NFL Week 16 matchup with playoff implications.

Sunday Night Football is one of the gems in the NBC crown.

Hulu Live TV’s sports coverage includes the full suite of ESPN channels (including ESPN2, ESPNews, ESPNU, and ESPN College Extra), FS1 and FS2. It’s also got NBC, NBSCN, the Olympic Channel, and the Big Ten Network. Hulu’s also got you covered for news and entertainment in its nearly 70-channel package.

Sling carries a Sports Extras option for Orange + Blue subscribers, with MLB Network, NBA TV, and NHL Network part of the plan. There’s also a Sports Extra add-on for the Sling Blue package, and another one for the Sling Orange package. To get NBC, you’ll need to make sure Sling Blue carries it in your market, or Sling with AirTV at your side.

The Fubo channel list includes NBC. It also includes plenty of sports, including the Fubo Sports Network, which has original programming mixing sports and humor. Fubo added the ESPN suite of channels in an agreement that also brought ABC and the Disney Channel. Pretty much every sports channel you could think of is available through Fubo, including BeIN Sports, CBS Sports Network, and TUDN.

At its most basic Plus tier, you can find sports staples like ESPN, ESPN2, and FS1. Considering that AT&TV TV Now plans include the loaded Ultimate and Premier tiers, as well as the Spanish-language Optimo Mas package, you can find whatever sports channel you’re seeking in at least one of the AT&T TV Now plans. You can stream Sunday Night Football via NBC on any of the English-language tiers.

Both teams can improve their playoff positions with a win: The Titans are trying to lock down the AFC South title, whereas the Packers can secure a first-round bye before bringing a challenger into Lambeau Field for a frosty January matchup.

Last week, the Titans blew past the Giants, 46-25, as Ryan Tannehill was a touchdown machine. He threw for three and picked up two more on his feet to put the Titans on the precipice of winning the division.

For the Packers, it was Aaron Jones with 145 yards rushing plus a score to lead them to a 24-16 win over the Panthers.

The Packers are 3-point home favorites (according to BetMGM the morning of Dec. 27), with an over/under of 54.5.