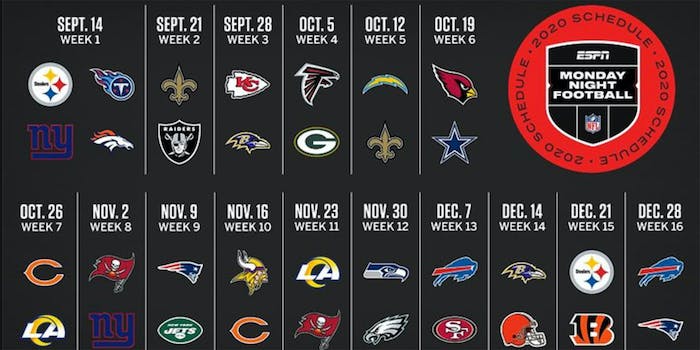 How to stream Monday Night Football live: Bills vs. Patriots

Here’s how to stream Monday Night Football as ESPN features the Bills vs. Patriots in an AFC East matchup that favors the visiting Bills.

How to stream Monday Night Football

Where to stream ESPN

The Fubo channel list still includes plenty of sports, including the Fubo Sports Network, which has original programming mixing sports and humor. Fubo added the ESPN suite of channels in an agreement that also brought ABC and the Disney Channel. That means you can stream Patriots vs Jets and all the Monday Night Football matches.

This season, unlike others, you ca stream Monday Night Football with Fubo. Now, pretty much every sports channel you could think of is available through Fubo, including BeIN Sports, CBS Sports Network, and TUDN.

For under $40 a month, Vidgo brings more than 60 English-language channels into its National English Package. Vidgo channels include ABC, Fox, the ESPN family of channels (including ESPN to stream Monday Night Football and ESPN Deportes), and NFL Network. It’s also one of the few streaming services that carries BeIN Sports. Like Fubo, it started out for streaming sports but carries a lot more now. There’s even a Social TV platform that allows you to chat with other Vidgo viewers about what you’re watching.

At its most basic Plus tier, you can find sports staples like ESPN, ESPN2, and FS1. Considering that AT&TV TV Now plans include the loaded Ultimate and Premier tiers, as well as the Spanish-language Optimo Mas package, you can find whatever sports channel you’re seeking in at least one of the AT&T TV Now plans. You can stream ESPN with every AT&T TV Now package, save for Optimo Mas.

For much of the last decade, a Week 16 game for the Patriots would be about securing home-field advantage. Now, the Patriots are out of the playoff picture entirely, and it’s the AFC East champion Bills looking to improve on its current No. 3 seed. A win over the Pats would allow the Bills to compete for the No. 2 spot currently occupied by a Steelers team that stopped a recent slide.

Last week, the Bills routed the Broncos 48-19 in a Saturday matchup; Josh Allen threw for three touchdowns and ran for another in the contest that wasn’t. Meanwhile, the Patriots dropped a divisional game to the Dolphins, 22-12, ensuring that they can’t finish above .500.