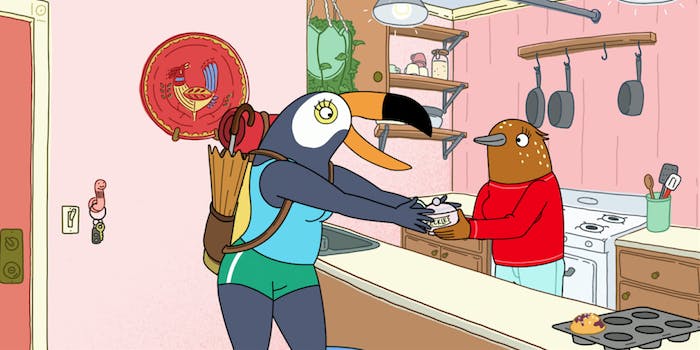 ‘Tuca & Bertie’ puts a fresh spin on the friendship sitcom

Tuca & Bertie, the debut show from BoJack Horseman production designer Lisa Hanawalt, starts with a moment of transition: Two best friends, Tuca (Tiffany Haddish) and Bertie (Ali Wong), who are residents of Bird Town, are no longer cohabitating. Bertie’s boyfriend Speckle (voiced by Steven Yeun) has moved in. There’s an uncertainty there, but the pulsating colors and hybrid characters of the show lift you up.

This 10-episode series shares an animation aesthetic with BoJack, but that’s about it. There aren’t any crossover characters or storylines, and Tuca & Bertie is more focused on the lives of women in their 30s than one horse-man’s depressive spiral. It’s also a more unusual world: Women have plants for heads and buildings have boobs. In one scene, Tuca and Bertie drive through mountains that are actually curled-up cats. And it’s meticulously detailed, from the framed posters on the wall to making Judge Judy into a sassy sparrow.

The fact that Tuca and Bertie are animated birds doesn’t take away from their distinctly human problems: money, mental health, workplace harassment, confidence, addiction, family. Bertie struggles to assert herself at work. After she gets an STD, Tuca is put on trial and her “sex bugs” are given their own storyline, but it subtly underscores the shame women are made to feel for being sexual. The character of Tuca was around long before the series, but you can see the vibe even in earlier sketches.

Before BoJack Horseman season 2 came out, Hanawalt told the Daily Dot she actively pushed to create more female characters in the show, when the “default” setting was often to just make side characters male. Tuca & Bertie isn’t an overtly feminine show, but you can definitely see the curves and instincts of it. In Bird Town, women still have to worry about violence and harassment, but there isn’t a sense of menace or dread. Here, boobs show they’re done being stared at by jumping off chests. Often, the wonders of this world are more engaging than the dialogue.

It’s a ripe time for shows led by women or about women’s relationships: Pen15, Shrill, Fleabag, Russian Doll, Killing Eve. Tuca & Bertie is a welcome addition, one that takes a couple episodes to find its momentum and tell the stories it thinks are important. Once it does, it shows its promise.