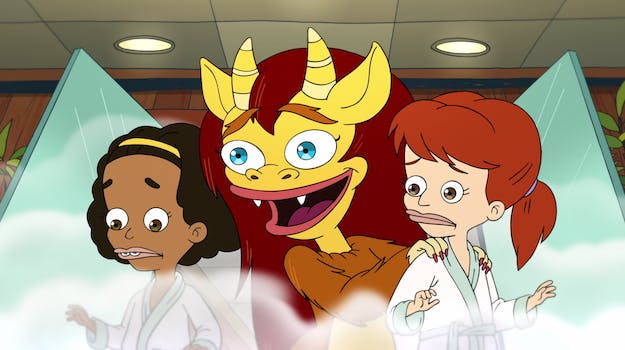 ‘Big Mouth’ is the best-kept secret on Netflix

Puberty! Everyone experiences it, and no one comes out unscathed.

From the jocks to the nerds, that time in your life when your body changes and your hormones spike is always filled with a certain amount of internal struggle. Countless “coming of age” stories have tackled this topic in some manner, which is why it’s surprising that one of Hollywood’s best takes on puberty ended up being Netflix’s Big Mouth, the wildly profane and surprisingly poignant animated show now in its second season.

It’s the kind of series where a celebration of body positivity will be followed by a parade of sentient, furry dicks.

One of the best things about Big Mouth is its formidable list of voice cameos, including appearances by Andrew Rannells, Chelsea Peretti, Rob Huebel, Kat Dennings, Mark Duplass, Paul Scheer, Kristen Wiig, Nasim Pedrad, Alia Shawkat, Mae Whitman, Zach Woods, Jon Hamm, Jack McBrayer, Craig Robinson, Jon Daly, Michaela Watkins, June Diane Raphael, Nathan Fillion as himself, and Kristen Bell as a talking sex pillow. (It’s just as absurd and wonderful as it sounds.) As The Simpsons proved decades ago, people will show up to do a few lines of dialog in animation, and Big Mouth takes full advantage of this.

Though the series feels like another Kroll/Mulaney joint and is similar in tone to the specific type of lunacy they captured with their “Oh, Hello” personas, Kroll actually created Big Mouth with three other writers—Andrew Goldberg, Mark Levin, and Jennifer Flackett. Kroll and Goldberg were childhood friends, and although Mulaney voices the fictional Andrew, it’s their relationship which the two main characters are based on. Not that Mulaney devotees will be disappointed. He’s perfectly cast as Andrew, and fans of his standup will also recognize his performance this season as a cop who’s a thinly veiled version of Detective J.J. Bittenbinder. (“Street Smarts!”)

The second season expands its focus to explore other harrowing elements of puberty. Again there’s a wonderful celebration of body positivity in episode 2, while episode 3 takes the concept of shame and personifies it. There are also discussions about consent, and the disparity between the way men and women often mature. In fact, the show doubles down on expanding the roles of its female characters, with Missy struggling to find comfort in her own skin, and Jessi starting off the season on the run with Jay and spending much of the rest of it fuming at her mom for leaving her dad—a subplot that feels too real. It’s the combination of truth and heart at the core of Big Mouth that makes it work, and although the show is full of juvenile humor it thankfully doesn’t exclude its female characters from any of the fun, the way so many other animated shows do.

There are a few creative swings too. One episode spends much of its runtime on Coach Steve’s quest to lose his virginity. In one of the best pieces of television advocacy I’ve seen ever, another installment uses skits in the style of Star Trek, The Bachelor, Woody Allen films, and horror movies to create what amounts to a free advertisement for Planned Parenthood. The reveal of one recurring character’s own abortion story in this chapter is as funny and wrenching as it is surprising.

Even with the endless selection of shows the platform offers, Big Mouth might be the best-kept secret on Netflix. For fans of adult animation, it’s a must-watch. For anyone who doesn’t look back on their pubescent years fondly, it’s the sex education we wish we’d had.