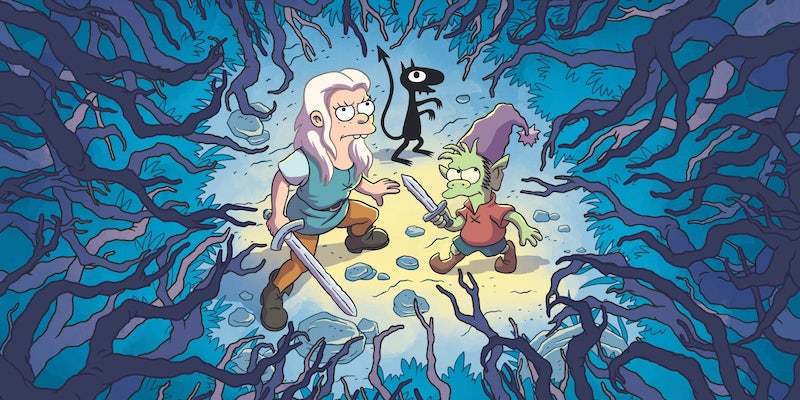 ‘Disenchantment’ transplants a screwball comedy to a fantasy realm

Matt Groening’s Netflix original series welcomes you to the fictional kingdom of Dreamland.

Matt Groening’s new Netflix original series Disenchantment upends expectations about fantasy series with its characters, storyline, and politics. But for all of its ingenuity, parts of its storytelling still feel stuck firmly in the past.

On the surface level, Disenchantment is gorgeous. The fictional kingdom of Dreamland, where we spend the majority of our time in the seven episodes available to critics, is already starting to feel like a fully formed location, much like The Simpsons’ Springfield or Futurama’s New New York. You can see it through Dreamland’s sign work—including one from a recurring location that pays off after several episodes—or through the creatures or the rotating cast of colorful characters. You’ll hear plenty of familiar voices among the supporting cast, which includes veteran voice actors (and Futurama alum) like Billy West, John DiMaggio, and Maurice LaMarche.

At the heart of the series is a trio of misfits that are all great and terrible influences on one another in a world not really built for any of them. Princess Bean (Broad City’s Abbi Jacobson) pushes back at the very narrow path she’s expected to travel in life but is wholly unprepared for the real world. Elfo (Nat Faxon) and Luci (Eric Andre), an elf who leaves his home for the first time and Bean’s personal demon sent to haunt her for the rest of her life, respectively, are like the angel and devil on her shoulder, each pointing her in one direction while she takes a few shortcuts along the way.

The first episode sees Bean attempting to get out of a wedding she wants no part in, illustrating the impossible tightrope that Bean—and so many others in the real world—have to walk. As a princess, she’s expected to marry someone to help create a political alliance and have lots of babies. She’s supposed to be well-mannered and poised, but Bean would rather drink, gamble, and see the world, and she’s deemed a failure for not falling into line; privilege both leaves her unprepared for the real world and is a real wrench in her dating life. (Thankfully, Game of Thrones references are kept to a minimum.)

Throughout the first season, Disenchantment tackles mythology, fairy tales, adventure, and frail political alliances with the kind of humor and satire you come to expect from a Groening show; as for tone, it’s more akin to Futurama than Simpsons. At times, the parodies and satire go in unexpected directions. Plot points that could’ve easily been dragged out for an entire episode are instead resolved in a single act or the opening minutes before the episode title flashes on the screen. It’s more serialized than you might expect, but you can also randomly select an episode without getting too lost.

Disenchantment works best when Bean, Luci, and Elfo are in sync with one another, regardless of whether they’re working together, butting heads, or scheming. They’re all flawed characters, even if what they bring to the table isn’t necessarily revolutionary or as trailblazing as the show thinks it is (particularly when it’s 2018, and it features one character negging another), and watching their plans—whether it’s a big party, a bit of casual murder, or both—play out can be downright entertaining.

Outside of the main trio, some of the supporting cast feels underdeveloped, and a lingering subplot with the people who tasked Luci with cursing Bean is drawn out without much payoff, at least so far. But the potential is there, particularly when paired off with the charm of its talented voice cast.

You should never trust them to lead you on a journey, but you can latch on from afar and enjoy the ride.

All 10 episodes of Disenchantment debut on Netflix Aug. 17.