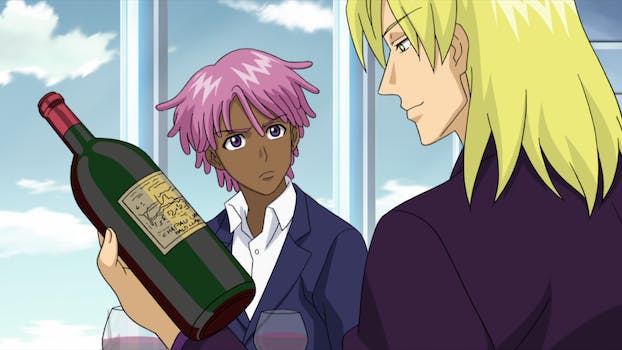 Not even Desus and Mero can save this thing.

Neo Yokio is billed as the greatest city in the world, but the anime world created by Vampire Weekend’s Ezra Koenig disappoints.

The six-episode Netflix anime follows the story of a wealthy teen named Kaz Kaan voiced by Jaden Smith, as he tries to navigate being a young bachelor recovering from a breakup and fighting demons that menace the city. While the star-studded cast of actors—from Tavi Gevinson to Desus and the Kid Mero of Desus & Mero—raised expectations, and the animation directed by veteran Kazuhiro Furuhashi is solid, the plot of the new series falls short.

The series lacks context, plot points, and character development. The 20-minute episodes follow Kaz Kaan as he tries to juggle his social life as an elite “magistocrat,” a class of people who once used their magic to catch rats, but rose to wealth and prominence by using it instead to slay demons attacking the city. Kaan runs demon-related errands given to him by his aunt, while trying to catch the hottest social events on time. But the show focuses so much on the class dynamics of Neo Yokio’s society, which serves as a platform for allegorical commentary on New York City, that it misses the basics. For example: When did Kaan start using his powers and what exactly are his powers? Who are the demons, and why are they attacking the city? And why were these powerful people using their powers for nothing more than catching rats before the demons showed up?

The holes are so glaring that you wonder if the writers were just too focused on graceless jabs at capitalism to mention anything about, you know, the main character’s magic demon-defeating powers.

In fact so much of the show is weak social commentary that you might think it was written by a college student who just read about Trotskyism. In the first episode of Neo Yokio, we learn that half the city is underwater (climate change!) and because of the demon attacks on the city, security and special searches are at an all-time high.

We also see Kaan’s first mission to rescue Tavi Gevinson’s character from demonic possession. Gevinson’s character is a fashion blogger who, after being saved by Kaan, realizes how vapid her life was before the possession. For the rest of the season she spends each episode doting on the woes of capitalism and why that’s actually what makes Neo Yokio less than the greatest city in the world (not the demons). They actually mention the word “capitalism” a lot, but nowhere is it explained why she was possessed.

Desus and Mero don’t disappoint as the comic relief, but Smith’s melodramatic performance is boring and clunky voice acting. The anime can’t decide if it wants to be serious or a teen comedy, and beyond its nonstop social commentary it seems to completely lack in self-reflection or awareness. This anime is an appropriation of an Asian artform, after all. You’ll struggle to let the next episode autoplay because the preaching becomes tedious.

The series ends on the lesson that the glamorous, luxurious lifestyle of designer clothes and exclusive clubs might not be all that it seems, which is hardly a spoiler. The star-packed project seemed too good to be true upon its seemingly rushed announcement this month. You’ll be curious to watch, but there’s little to see here. From Fullmetal Alchemist to Attack on Titan, there is much better anime on Netflix. anyway.