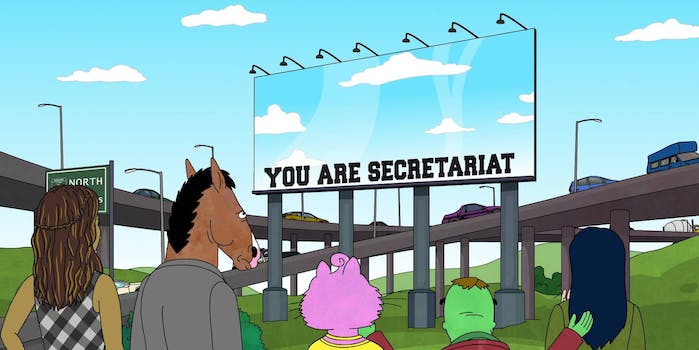 In BoJack Horseman, the town of “Hollywoo” is home to the titular horse (voiced by Will Arnett), a former sitcom star trying to make a comeback in film. It’s a city where humans and animals coexist, and man bites dog translates literally in the daily climb to fame. In season 3 of the Netflix show, this alternate-reality Hollywood becomes a literal mirror.

Over the last two seasons, the show explored depression and self-renewal. But the latest season explores how far fame can push you. An Oscar campaign for BoJack’s film Secretariat is the througline, elevating him from self-doubt to self-obsession as his image spins out of control: In one episode, an ad campaign for the movie adds mirrors to billboards, so you “are” Secretariat. It’s a reminder of the depths of narcissism and bad ideas in Hollywoo(d).

If a season devoted to the process of winning an Oscar seems ridiculous, that’s the point.

BoJack Horseman has joined the cabal of modern shows about (and that lampoon) showbiz and fame: The Comeback, Lady Dynamite, Difficult People, Extras, Hello Ladies. Wisely, Bojack Horseman is devoting more time to supporting characters and their backstories. In a flashback to 2007, we see BoJack’s agent Princess Carolyn (Amy Sedaris) trying to work her way up and being dismissed by her sexist boss. “Again with this ‘I wanna be a female agent thing,’” he sneers. “They don’t even have a word for it!”

Elsewhere, BoJack mulls the idea of committing murder and potentially losing his Oscar nomination: “The Academy does not look kindly on murder. Rape, they don’t seem to have a problem with.”

Last year, creator Raphael Bob-Waksberg told the Daily Dot the way he frames BoJack’s life might be self-reflective: “[W]e keep giving him the things that he thinks he wants, and he’s still not happy. And really exploring that has been what’s interesting to me, as a writer.”

In an interview with the New York Times, Bob-Waksberg goes further in blurring the line. When asked why he set season 1 scenes in L.A.’s Griffith Park, a location he returns to this season, he replied: “It’s that mixture of urban and wild that you get in L.A. And then you look down and see the city, and you escape, but you can’t escape.”

The show’s colorful animal-human design gets many of the heavier themes across. Producer and designer Lisa Hanawalt is a master of her universe. There’s no shortage of animal-based puns and sight gags, like when a bird tries to commit suicide by jumping out a window, then remembers she can fly.

In standout episode “Fish Out of Water,” BoJack wanders around the undersea Pacific Ocean Film Festival, where all conversations are muted—because he can’t figure out how to talk without removing his large helmet. (This, of course, becomes a punchline at the end.) BoJack steps onto a bus where a male seahorse is giving birth. He connects with one of the newborns and wordlessly communicates as they move deeper into a dream-like maze of deep-sea caves and pipes. 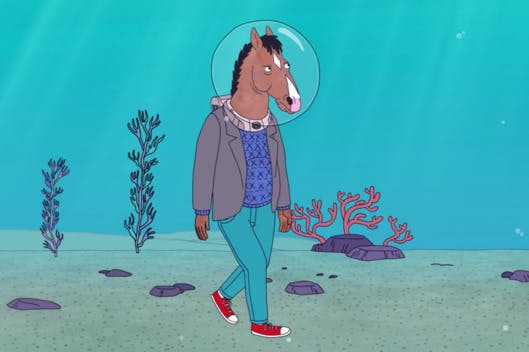 It takes a moment to sink in that you’re watching an entire sitcom episode advanced in near silence. It’s a reminder that for all the dark themes and ego-tripping, BoJack Horseman is one of the most visually stunning series on TV. It’s there, far away from the glare of Hollywoo, that we see BoJack have some kind of emotional response.

But this center cannot hold. When BoJack’s movie gets good reviews, his ego is aquiver. (“Why is nobody talking about me for a minute?” he asks at the premiere.) The season ends with a soul-crushing bender, in which BoJack catches his reflection and sees nothing good about it. He falls back into the mirror.

Netflix has become a beacon for shows about mental health: Lady Dynamite, Jessica Jones, Unbreakable Kimmy Schmidt, Orange Is the New Black. But with season 3, BoJack Horseman has managed to create an extended universe that doesn’t just revolve around BoJack’s demons.

In season 1, he was a cliché—a washed-up star looking for a comeback. Could this idea really span several seasons? But an episode like “Fish Out of Water” shows just how much can be done in Hollywoo.