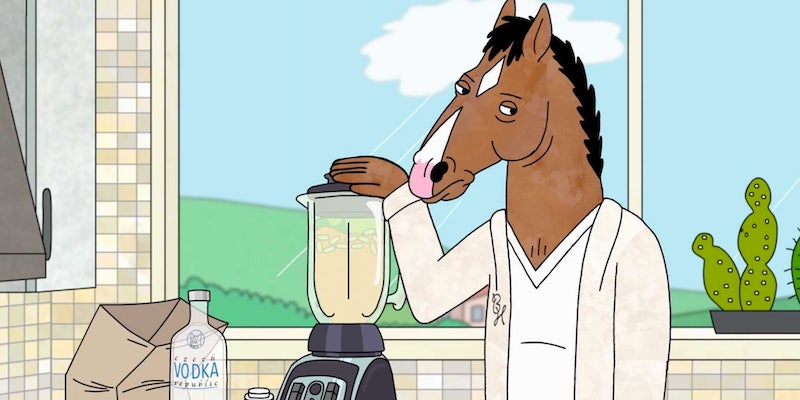 ‘BoJack Horseman’ and the peculiar charm of sad cartoons

Animation is all grown up.

For decades now, animated series have been challenging every basic assumption about the format: That it’s juvenile, that it’s simplistic, that it lives or dies on a flurry of punchlines.

BoJack Horseman, a Netflix original series, subverts all those notions with the sort of dark wit and emotional force that make for cult classic status. Fans can’t stop talking about the series, though their chatter is often punctuated with comments like “I can’t believe nobody is talking about this.” A vast majority of the user reviews follow the same line of thinking: that the first few episodes fail to impress—it’s typical crudeness on top of a threadbare plotline about trying to make a comeback in Hollywood—but the characters eventually reveal surprising depths.

In fact, BoJack may have more in common with live-action dramatic comedies about self-destruction than Family Guy or the gonzo Adult Swim stable. The goofy but watchable Californication comes to mind, as does Enlightened, a bracingly original show so packed with Real Talk™ that HBO had no choice but to kill it. As with protagonists Hank Moody and Amy Jellicoe, Will Arnett’s BoJack Horseman is washed up, self-involved, and only sort of trying to claw his way back to the top, taking detours guided by his worst instincts. Most of all, he wants to impress the woman ghostwriting his memoir (Diane Nguyen, voiced by Alison Brie).

That yearning for approval sets up some of BoJack’s bleakest scenes. At one point BoJack begs Diane, in front of a literary panel, to tell him that he’s a good person. Rather than cut him down, she simply remains silent. A late-season episode concludes with BoJack telling her, “I just really wanted you to like me.” Her devastating reply: “I know.” We get flashbacks to BoJack’s childhood and cruel upbringing that are played for laughs but nonetheless expose the origins of his failings as an adult. A medium built on two dimensions opens into the third.

BoJack’s forerunners weren’t without pathos, of course. In its heyday, The Simpsons could tug at your heartstrings with storylines about Homer losing and regaining Lisa’s respect, or Marge’s disappointment over Bart’s criminal disposition. Futurama, Matt Groening’s next series, has more than its fair share of tearjerker codas, including a dog-centric one so profoundly upsetting that it’s become Internet shorthand for a weepy breakdown. (Seriously, I’m tearing up even thinking about it.)

Still, these sitcoms provide the “everything’s back to normal” resolutions we tend to expect. More chronological cartoons, like Archer and The Venture Brothers, dip gleefully into the wells of death, violence, and horror—but they’re so sleek and cynical that neither quite hits you in the feels, as they say. The sense of ennui on BoJack has something different about it, as if we’ve broken through one of the last barriers between cartoons and the people who would never normally watch them. Though it’s populated by anthropomorphic animals and peppered with cutaway gags, it feels realistic. BoJack’s flaws are recognizably our own, writ large. It’s a battle between explosive ego and the dearth of all self-esteem.

Because it’s a cartoon, BoJack can also directly illustrate the bipolar psyche of its main character, both the deluded highs and harrowing lows. One memorable episode dedicates a full 10 minutes of its running time to a hallucinogenic trip that’s by turns absurd, alluring, downright terrifying, and heartbreakingly poignant: a companion piece to the chase through an actor’s subconscious depicted in Being John Malkovich. Juxtapose that virtuosic run with the season’s final moment, in which BoJack, alone at a Los Angeles landmark that happens to memorialize a ruined friendship, emits a surprised “Huh” when a fan calls him his hero—slow zoom out, barely any motion—and you get a sense of the series’ dazzling range.

With that finale, we can no longer entertain any doubt that BoJack is, at heart, an animated tragedy. The only other one that comes to mind (and it probably shouldn’t count) is Richard Linklater’s A Scanner Darkly. Yet the madness and fallout of drug addiction is but one ingredient in this poison cocktail; far more pressing is the inability to distinguish what’s truly important in life, or overcome jealousy, or repay the trust and affection bestowed upon you.

BoJack, as the series makes perfectly clear, lives a life of privileged luxury, with copious money from his time in the limelight, though it seems to mean nothing without the fame. Then, on the verge of becoming an A-lister once more, he recognizes the hollowness of that dream, too. In America, we always wonder why celebrities—whether teenaged or over the hill—are capable of their unique insanity. What BoJack makes plain in a way that no other TV show ever has is that this is the end result of mistaking an audience’s adoration for real love.