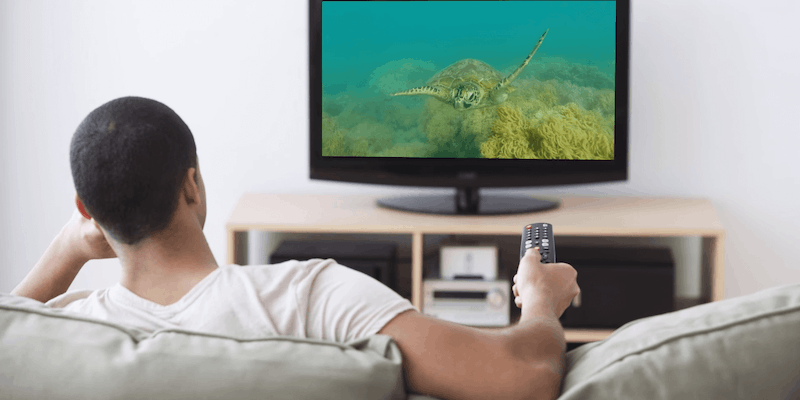 Here's how the competition really stacks up.

There are few things more satisfying than breaking up with your major cable company. You no longer have to install a satellite or pay through the nose for a massive cable package when you only care about a handful of channels. But while Netflix, Hulu, and Amazon Prime might satisfy your need for on-demand movies and TV shows, you may still find yourself wanting live TV streaming, especially if there’s a series you want to watch in real time or there’s a big game on you just can’t miss.

Thankfully, there are plenty of live TV streaming options to choose from—too many in fact. In the last two years, the market has been flooded with new services, and they’re gaining popularity quickly. According to a CNBC report, YouTube TV now has over 300,000 subscribers while Hulu with Live TV boasts 450,000.

Figuring out which live TV streaming service is right for you can get complicated quickly. We’ve broken down all of the best options below to help the decision-making process easy for you.

Sling TV is arguably the most established and well-known live streaming TV service. It launched in 2015 and has earned a loyal following for its cheap plans and à la carte options.

Cost: Sling TV’s Orange package is just $35 a month, its Blue package costs $35 a month also. Yes, you have to pay extra for ABC ($5/month). HBO costs $14.99, the same it does most other places. While the start-up cost is low, when you factor in add-on channels, Sling TV quickly adds up.

Channels: Sling Orange comes with around 31 channels, while the Blue package comes with 41, depending on what local options are available to you. If you bundle the two packages together there is some overlap, so you’ll only end up with about 47 channels. If you’re looking for the cheapest access to ESPN, Sling TV is for you, with the $35 Orange package delivering all the sports you can handle. Each of the three packages includes CNN, Comedy Central, Cartoon Network, FX, AMC, NFL Network, and more. Sadly there’s no MTV.

Sling offers free DVR, with up to 50 hours of storage included. If you need more you can get up to 200 hours for just $5. Just take note that many channels can’t be recorded. You can find a complete list of those channels here.

Sling TV is a winner when it comes to price and interface. It’s hard to beat its $35 entry point, and once you’re logged in, navigating is a breeze. Unlike Hulu with Live TV and PS Vue, Sling TV has a menu system that’s easy to pick up from the get-go. Still, if you’re looking to add channels beyond the standard live TV streaming package, Sling TV’s monthly price can creep up.

Launched in 2017, Hulu with Live TV is exactly what it sounds like: a live TV streaming option from one of the leaders in on-demand entertainment. The best part about it is that it comes with free access to Hulu with Limited Commercials (a $.99/month value), unlocking its deep library of movies,  TV shows, anime, documentaries, scary movies, and must-see Hulu originals.

Hulu with Live TV offers over 75+ channels, though the exact number is dependent upon on the number of local channels you’ll be able to pick up. You can expect to find popular favorites like Food Network, Nat Geo, TNT, and the Travel Channel, along with ESPN and each of the major news networks. Sadly, Hulu doesn’t have a deal with Viacom, so you won’t get Comedy Central, MTV, Spike, or Nickelodeon. AMC is also missing.

Hulu is a brilliant middle ground, offering a world-class streaming service in addition to streaming live TV. However, while its design is beautiful, it can take some getting used to, especially given the way it curates channels based on what you watch. If you want to surf or find your DVR shows, you’ll need to dig through menus, which often feels like a hassle. Still, for the cost and what you get, Hulu with Live TV is an incredible deal. We just don’t recommend it if you find existing streaming services difficult to navigate.

Originally launched as a way to watch sports online, FuboTV has expanded its offerings to compete with other live TV streaming, and it’s competitively priced.

FuboTV offers four levels of service. Fubo Pro, the standard package, costs $69.99/ per month. The Elite Plan is $79.99/ per month. Ultrimate is $99.99 per month for even more channels, including Showtime.

If you want a mostly standard TV package, Fubo Pro is the only way to go. Subscribers get 100-plus channels, depending on what local channels are available in your area. FuboTV is heavily weighted towards sports, particularly soccer. In fact, over 20 of the channels that come with the basic package are focused on sports, but it glaringly omits ESPN.

FuboTV is another live TV streaming service that leaves game console viewers out in the cold, but thankfully there are plenty of other options to choose from. Roku, Apple TV, iOS and Android, Amazon Fire devices, Android TV, and Chromecast all support FuboTV.

Fubo has recently upgraded its service, offering 1000 hours of cloud DVR to all users. In addition, the service has also introduced its own 72-hour lookback feature, letting you go back to your listings to watch shows that have already aired. However, where Fubo really sets itself apart is it’s incredible 4K live events. No other streaming service offers 4K live streaming of sports.

FuboTV feels like a good service on the verge of becoming a great one. For a sports-focused company, the lack of ESPN is odd, but no one else in the game offers as many options for sports fans, and its’ Sports Plus package adds 15 additional channels that include NFL RedZone and five Pac 12 channels.

Launched in April 2017, YouTube TV offers solid competition in the world of live TV streaming and boasts some of the best features around.

YouTube TV’s plan costs $69.99/ per month. Additional sports and premium networks like Fox Soccer Plus, Showtime, and Starz can be added for an extra monthly fee.

The service boasts just over 85+ channels, ranging from CBS to ESPN, though there are some odd holes in the lineup. You get Fox and MSNBC, but not CNN, for example.Still, there are plenty of solid options, including AMC, FX, and SYFY, and Nat Geo.

YouTube TV has some of the most generous special features in the live TV streaming world. While every service allows multiple users to watch at the same time on one account, YouTube takes it to the next level by offering six accounts per household.

Each with their own personal login and unlimited DVR, meaning you’ll never accidentally record over your roommate or Mom ever again. YouTube is also one of the only services that lets you fast forward through ads on your DVR’d shows, which is always a bonus. YouTube TV also gives you access to YouTube Red Originals.

YouTube TV is an odd choice for live TV streaming. Its unlimited cloud DVR is hard to beat. The interface takes some getting used to, but the service’s live TV grid view is helpful for planning your viewing schedule. YouTube TV is best for houses with multiple viewers all sharing an account.

Philo is a recently launched live TV streaming option focused on lifestyle, entertainment, and educational programming. It’s a budget-friendly option that makes it easy to get started.

Want to give it a try? Philo only requires a phone number for a free trial, no credit card or payment needed.

For a budget-priced service, Philo comes packing some big names, including all the Viacom channels other providers are lacking. Subcribers get over 60 channels of fun.

Philo allows users to record shows. However, each program will be deleted 30 days after being recorded.

While limited in its channel selection (there’s no ESPN or American news network) and ways to watch, you get more than you pay for with Philo, and it’s perfect for late-night channel surfing.