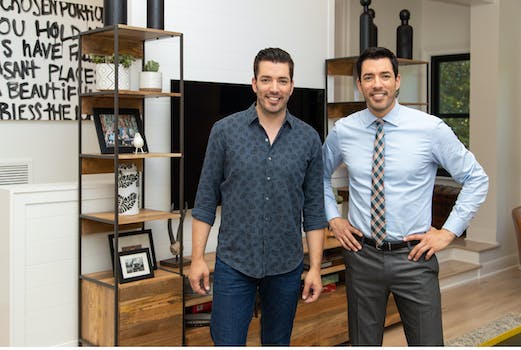 One is a hot-shot real estate expert who uses his negotiating skills to track down neglected houses with potential. The other takes the newly acquired property and, using his skills as a contractor, transforms it into a home worth living in. Together, they are Property Brothers, twins whose real-estate adventures are chronicled in a massively popular HGTV franchise of shows. Their latest home-improvement adventure is Property Brothers: Forever Home.

No fixer-upper is safe from the combined talents of hosts Drew and Jonathan Scott, who work in tandem to help families turn would-be shanties into dream homes, all while staying under budget and on schedule. Let’s see any other contractor do that.

In their newest series, Property Brothers: Forever Home, the brothers will work with couples who are already settled but whose homes could use a glow up. Unlike past series, this Property Brothers show will forgo the usual real-estate portion of the program and focus on tips, tricks, vision, and guidance to perform perfect home makeovers. Jonathan and Drew will work with couples to unlock their homes’ full potential, for them to live happily ever after in. You know, a “forever home.”

Here’s everything you need to know to stream Property Brothers: Forever Home.

What is Property Brothers: Forever Home

One of many Property Brothers spinoffs, the show was produced after many fans requests advice for renovating homes they are already living in. The show tours recently renovated homes, and the brothers offer homeowners features they’d like to see implemented in their “forever home.”

HGTV is available on a handful of the major live TV streaming services. When trying to decide which one is best for you, you’ll want to weigh the cost, the other channels you’ll receive, and the compatible devices for streaming.

To stream Property Brothers: Forever Home, you’ll want to dock in at the FuboTV Standard level.

If you’re looking for Property Brothers: Forever Home, know that you can stream it on YouTube TV.