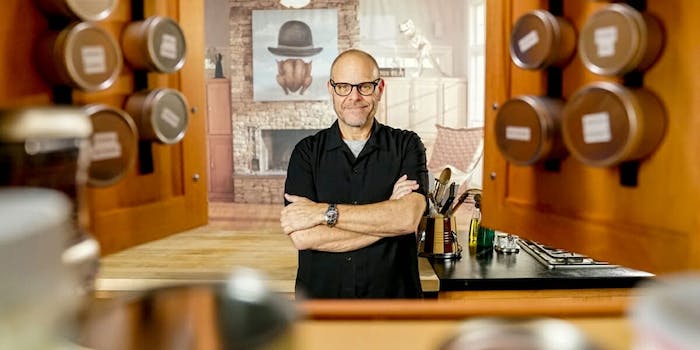 How to watch the Cooking Channel online for free

Where to stream Cooking Channel

If chefs are the new pop stars, then it’s probably no surprise that the figurative airwaves of cable and streaming TV are today as chock-a-block with food-related delights as they were full of hair metal videos and moonwalks in the ’80s. Some of Netflix’s most addictive shows are the food-porn delights of Chef’s Table and Street Food—series that are very nearly bingeable in the literal sense. Chefs like David Chang captain not just eateries but veritable media mini-empires. And your average cable package boasts more than one channel devoted to the culinary pursuits, like the Cooking Channel.

Most everyone knows about the Food Network, the channel that helped make superstars of Rachel Ray and Paula Deen. The Cooking Channel launched as a spin-off of that network in 2010, focusing on instructional and personality-based programming in a time when the Food Network had shifted toward reality TV and competition shows. Today, it’s one of the best places to turn for a very nearly 24/7 array of shows showcasing—well, really good food that’s really fun to look at. Culinary Yoda Alton Brown’s Good Eats: Reloaded revisits old gems from the classic series, reexamining and updating old episodes. Michael Symon’s Burgers, Brew & Que aims for maximum mouth watering. Man Fire Food’s Roger Mooking travels the country scouting out the best flame-cooked … well, everything. And Food Truck Nation … well, it’s a show full of delicious food truck food. What’s not to love?

The channel these days is pretty light on cooking instruction. But some would argue that’s what YouTube is for. Instead, the Cooking Channel focuses on great grub—most of it pretty indulgent—and where to discover it. And with a live TV subscription service, you can chew on it anytime, no cable subscription necessary.

Here’s everything you need to know to catch a Cooking Channel live stream.

What is Cooking Channel?

The channel originally launched as Fine Living Network, which was a lifestyle and leisure channel aimed at high-income earners. The channel was rebranded as Cooking Channel in May 2010 and began airing reruns of popular Food Network programs as well as original programming.

There are a number of live TV streaming services that offer the Cooking Channel. So, how do you decide which one is right for you? Well, that depends on your budget, what other channels you just can’t live without, and what device (or devices) you plan on streaming with. We cover all of those essential issues below. But don’t worry: No matter which service you select, you’ll be able to start with a one-week trial, allowing you to watch the Cooking Channel for free.

Philo is a budget-minded streaming service, and depending on what channels you want, it might be right for you. The 59 Philo channels lean decidedly toward entertainment; the Philo channel list includes AMC, Discovery, IFC, Lifetime, and the Paramount Network, all for $20 a month. If you’re a fan of Cooking Channel, you’re in luck: You can find it on Philo. Philo also comes with free cloud DVR, but shows recorded are deleted after 30 days, so binge responsibly.

Hulu Live TV sets you up with local channels and has a broad spectrum of entertainment and sports channels to review, including the full suite of ESPN channels, Cartoon Network, FX, HGTV, and even deep cuts like National Geographic and Syfy, and of course, Cooking Channel.

To watch Cooking Channel, you’ll want to dock in at the FuboTV Ultra level.

If you’re looking for a streamlined, cost-effective streaming package, check out Sling TV. It offers two basic cable packages, Sling Orange and Sling Blue, each of which costs $30 per month. There’s also the third option of getting Sling Orange + Blue for just $45 per month. You’ll get more Sling TV channels by choosing Sling Blue, with its 40 channels including sports favorites like FS1 and NBCSN and cable mainstays like Food Network and Discovery Channel. But Sling Orange brings must-haves Disney Channel and ESPN as part of its package. To gain access to Cooking Channel, you’ll either need Sling Blue, Sling Orange, or Sling Orange + Blue as well as the Lifestyle Extras channel suite. Sling also has a number of add-ons, including robust international packages organized by languages all over the globe.

If you’re already looking to AT&T for your wireless needs, you might consider AT&T TV Now to cover streaming for you. AT&T TV Now channels start with Plus and Max, which even include HBO. Then, AT&T plans expand from there, approaching cable selection and pricing with AT&T TV Now’s biggest packages. AT&T streaming also comes with Cloud DVR, letting you record up to 20 hours of TV per month. If you’re looking for Cooking Channel, get in at the AT&T TV Now Choice tier to stream it.

The following is a sampler platter of Cooking Channel shows: