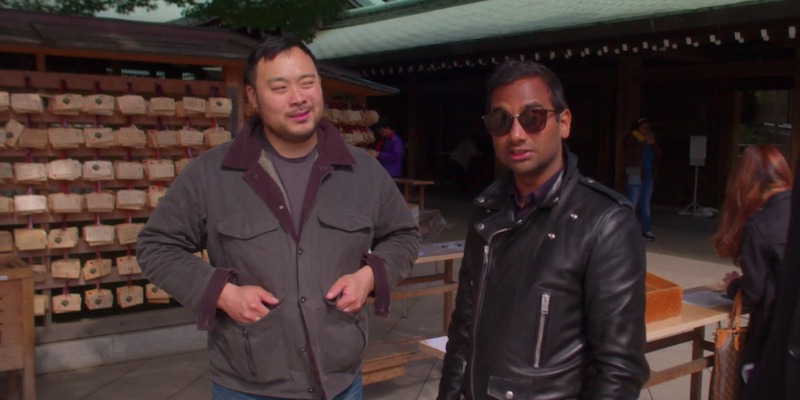 The celebrity chef returns with a Netflix docuseries.

Chang first made his name shaking up New York’s fine dining scene. He’s now authored hit cookbooks, run a chic food magazine, and has a 200-seat Las Vegas branch of his original restaurant, but before all that, his early menus at Momofuku and Momofuku Milk Bar completely subverted what people thought to expect from a casual meal. His style is sort of “elevated stoner” meets “modern Korean.” Chang plays with ingredients, combining them in ways you’ve never seen and giving you an experience that somehow still feels accessible and homey. So he’ll never serve you plain cookies and milk, but he will serve you a compost cookie with pretzels, potato chips, and butterscotch inside, and a glass of pink milk that’s been pre-sweetened by sugar cereal and then strained back into the bottle. It’s a playful approach to highly technical cooking that has influenced a generation of chefs, and inadvertently shaped the way millennials have come to think about eating. Not that Chang would ever want you to say that.

In Ugly Delicious, Chang seems to be concertedly trying to combat his association with viral eating. The show’s title refers to a hashtag Chang uses on his Instagram, highlighting dishes that prioritize the flavor experience over aesthetics. And while he still enjoys bad-boy stunts like ordering a Domino’s pizza to his friend’s high-end restaurant, he also seems laser-focused on the idea that lovingly made, home-cooked food can play a role in integrating immigrant cultures into the U.S. consciousness.

Chang’s friend Aziz Ansari appears in a couple episodes, and in many ways, Ugly Delicious feels like Chang’s answer to Ansari’s bestselling book Modern Romance. Ansari partnered with a sociologist in Romance to look into the culture around dating and love—two subjects he touches upon in his standup—and in this docuseries, Chang talks with hometown chefs, celebrated food critics, and social scholars in much the same way.

The show is at its best when it’s exploring food as a tool for transcending cultural barriers. Through on-site interviews and roundtable conversations with people at every level of the industry, Chang does a good job of illustrating food’s place in the assimilation experience for so many immigrant groups. Whether it’s Houston’s Viet-Cajun seafood scene or Tulum, Mexico’s high-end taco scene, across cultures and across regions people are distracted from their differences when stuff tastes good. And many immigrant groups have invented entire new genres of food by combining elements of cooking from their native countries with ingredients local eaters already feel comfortable ordering.

One of the most powerful scenes in the season happens in the taco episode, where Chang dives deep into the struggle between appropriation and loving homage that can exist when you’re trying to put your own spin on traditional foods. Author Gustavo Arellano explains food’s power to blur cultural divides, because no matter who you are, you eat.

“I once put away a couple of white supremacists, in jail, and I found pictures of them that they had posted on Stormfront of them eating Del Taco burritos, which, that’s awesome to me,” Arellano explains. “When you have white supremacists gorging on Mexican food and thinking that’s part of who they are, that’s a small victory unto itself… I just want people to understand that a taco is not just a taco. A taco is culture. A taco is history. A taco is migration. A taco is, you know, resistance. Politics. All of that stuff. But it’s difficult because often in foodie culture people just wanna eat. They don’t wanna think about what they eat.”

And just like that, a discussion about Taco Bell and corn tortillas feels incredibly pertinent to 2018.

The hour-long episodes are highly bingeable but also dense enough to space out over time and treat as eight mini documentaries. Each food Chang tackles seems to bring him a step closer to a new era of his cooking career, one where he focuses more on flavor and process than on aesthetics and impressing people.

If the show suffers from anything, it’s Chang not being further along in that transition. He allows the cameras into his family Thanksgiving while he cooks with his mother, and into his home kitchen while he throws together dinner for his wife, but the celebrity chef seems locked up in those moments. More stilted. Just like food permeates social barriers, it dissolves that curtain of proficiency, too. No one is a master chef at their mom’s house. Cooking at his childhood stove, we watch Chang be a son, and a suburban kid, and a guy who’s maybe regretting inviting a Netflix documentary crew to his holiday gathering. Allowing himself to have that humanity while still trusting himself to make good food seems to be Chang’s next frontier.

Chang started his culinary career as an underdog—a young chef with an outsider’s perspective on the fine dining experience—but he’s since graduated into a member of that establishment he used to be rebelling against. In Ugly Delicious, it’s a role he seems determined not to take lightly.