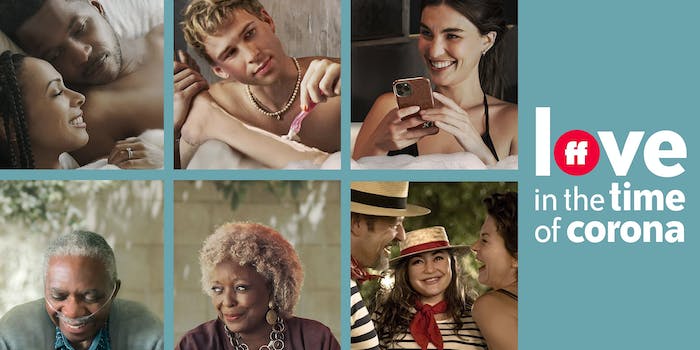 How to stream ‘Love in the Time of Corona’

Love knows no bounds. Even pandemics.

The modern dating scene is pretty bleak. Too many apps, too many flighty romantic prospects, and more ghosting than a haunted house. Throw a pandemic into the mix and the very concept of romantic love may as well be dead and buried. Despite all these challenges, it’s not stopping a few dedicated romantics from finding their boo in Love in the Time of Corona.

This Covid-19 era romantic comedy explores the lives of the brave and dedicated few looking for love, sex, and human connection during the ongoing pandemic. Will they break social distancing rules to get a chance at happily ever after? It’s unwise, but love makes folks do crazy things sometimes.

Here’s everything you need to know to stream Love in the Time of Corona.

What is Love in the Time of Corona?

Love in the Time of Corona Reviews

How to stream Love in the Time of Corona

Freeform is available on a few of the major live TV streaming services. When trying to decide which one is best for you, you’ll want to weigh the cost, the other channels you’ll receive, and the compatible devices for streaming.

Love in the Time of Corona on Hulu with Live TV

Love in the Time of Corona on Sling TV

Love in the Time of Corona on Vidgo

Vidgo offers a package for under $40 a month that pulls together more than 60 English-language channels into its National English Package. Vidgo channels include ABC, Fox, the ESPN family of channels (including ESPN Deportes), and it’s one of the few streaming services that carries BeIN Sports. But it’s like Fubo in that, even though it started out for streaming sports, it carries a lot more now. You might be surprised to know that Vidgo’s an option to stream Freeform—and then you chat about it online via Vidgo’s Social TV platform.

Love in the Time of Corona on AT&T TV Now

If you’re already looking to AT&T for your wireless needs, you might consider AT&T TV Now to cover streaming for you. AT&T TV Now channels start with Plus and Max, which even include HBO. Then, AT&T plans expand from there, approaching cable selection and pricing with AT&T TV Now’s biggest packages. AT&T streaming also comes with Cloud DVR, letting you record up to 20 hours of TV per month. If you’re looking for Freeform, get in at the AT&T TV Now Plus tier to stream it.

Love in the Time of Corona on YouTube TV

If you’re looking for Freeform, know that you can stream it on YouTube TV.