How to watch the Screen Actors Guild Awards

You don't need cable to watch your favorite actors get recognition.

The 2019 Critics’ Choice Awards and Golden Globes hinted at some major potential Oscar wins. Now, the 2019 Screen Actors Guild Awards are here, and streaming services like Hulu, Sling TV, and YouTube are here to help you root for your favorites. The awards will be simulcast on both TBS and TNT, and you can check out the full list of nominees and follow along on Twitter with #SAGAWARDS. But if you’re looking for a way to watch the SAG Awards online for free, we’ve got you covered. Here’s everything you need to know to watch the SAG Awards live stream.

SAG Awards live stream: How to watch the SAG Awards online for free

Bradley Cooper and Lady Gaga’s A Star Is Born is currently leading in the film category with four nominations, including best cast in a motion picture. Other best cast nominees include Black Panther, BlacKkKlansman, Bohemian Rhapsody, and Crazy Rich Asians. Last year, Kristen Bell was the first-ever Screen Actors Guild Awards host. This year, Megan Mullally (of Will and Grace fame) will follow in Bell’s footsteps as the 25th annual SAG Awards host.

All of the following services offer both TBS and TNT, not to mention a one-week free trial, so it’ll be easy for you watch the 2019 Screen Actors Guild Awards. Just be sure to check the compatible devices for each service so you know you’ll have a way to stream the action.

Separately, the Sling Blue or Sling Orange package come at $25 per month, and both come with a TBS and TNT stream. You can also opt for the Sling Orange + Blue packages for $40 per month and a larger selection of channels. Sling TV works on a ton of devices you probably already own, so it’s a great option even if you’re just testing out the free trial. And if you stick to the most basic package, Sling is the cheapest option on this list (after the free trial). (Here’s the complete guide to Sling TV channels.)

If you want to watch the SAG Awards plus the top-nominated movies and shows—like The Handmaid’s Tale and Killing Eve—Hulu with Live TV is your best bet. You get more than 50 channels of live TV, including TBS and TNT, and full access to Hulu‘s on-demand catalog. (Here’s the complete list of Hulu Live TV channels.)

While FuboTV has earned a strong reputation for streaming live sports, especially international soccer, there’s a lot more to it than that. FuboTV offers Hallmark Channel, HGTV, Bravo, Food Network, and Lifetime, among many others. (Here’s the complete FuboTV channels list.)

YouTube TV is a really great way to step up your streaming options. If you want to stream the SAG Awards on TBS or TNT, you can. You should know that there’s no way to add HBO if you want to check out nominees like Sharp Objects or Barry, but there are plenty of other premium channels. (You can find the full list of YouTube TV channels here.)

DirecTV Now is one of the best streaming services out there for the money, and it’s also one of the cheapest ways to get the premium channels. HBO for $5? Sold. The $40-per-month Live a Little package includes TNT and TBS for your SAG Awards live stream, plus AMC, Comedy Central, and more. (Here’s the complete guide to DirecTV Now channels.)

Other ways to watch the SAG Awards online

If you subscribe to TNT or your cable service includes TNT, just head over to the TNT website, find your stream provider, and log in with your credentials. You’ll be able to access a SAG Awards live stream from here.

Both TNT and TBS will live stream the SAG Awards in real time on YouTube. You’ll have to put up with some ads and potentially lower quality, but this is a solid bet for watching along with the awards if you’ve exhausted other cable TV or streaming options. 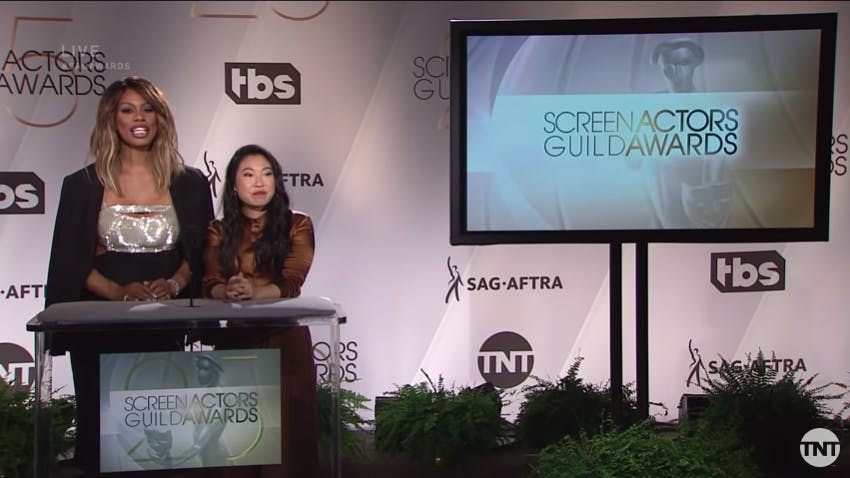