DirecTV Now is no longer your best option for replacing cable

There are better options out there.

There’s more competition than ever in the live streaming TV market, with new services leading the charge and cable companies struggling to keep up. Teaming up with AT&T, DirectTV launched its own streaming service, DirecTV Now, in November 2016. But after a couple of price hikes and the addition of two new channel packages, is DirecTV Now still worth your consideration. Here’s everything you need to know.

What is DirecTV Now?

DirecTV Now in a streaming TV service. It differs from DirecTV in that it doesn’t require a satellite, installation, or any sort of long-term contract in order to get started. Instead, you’ll use a streaming device (covered below) to watch live channels using your internet connection.

Along with a selection of the cable channels, DirecTV Now offers local channels to limited parts of the United States. You can check which local channels are available in your area here. Here’s what came back when we tested a Washington, D.C., ZIP code.

You can stream DirecTV Now on Roku, Apple TV, Google Chromecast, Amazon Fire Stick and Amazon Fire TV, and iOS and Android devices, as well as with the web browsers Chrome and Safari. As of March 13, DirecTV Now is only offering two streaming packages. Here’s what you need to know about each one.

Both of DirecTV Now’s packages are significantly smaller than what the service previously offered (see below). That’s because you won’t find any channels from Viacom (MTV, Comedy Central), AMC Networks (AMC, BBC America), or A+E Networks (History, Lifetime). You’ll still get more than 50 channels, most notably ESPN, FX, and Bravo, and HBO is included. You can find the complete list of DirecTV Now Plus channels here.

Given the significant jump in price, you’d think you’d be getting a lot more for your buck with the Max package, but aside from Cinemax, a couple of smaller ESPN channels, and a few other niche sports options, there’s not enough to justify the price jump. (You can see all of the DirecTV Now Max channels here.) Following the rollout of its Max and Plus packages, DirecTV Now is no longer offering the four packages covered below or its Spanish-language package, Todos y Mas. Existing customers can continue to subscribe to the packages, but a $10 price hike will go into effect April 12. If you have one of these packages, I’d hold on for dear life. They’re a far better value that the service’s new alternatives.

For $50 per month, Live a Little subscribers get 60-plus channels, including everything from VH1 to CNN to Cartoon Network. Sports fans will appreciate ESPN and ESPN2 finding a home in the core package. There are a few odd missing options, like the Weather Channel, but this is an excellent package for the price.

For $65 per month, Just Right package adds 20 channels, including ESPN SEC, Nicktoons, the Travel Channel, and the aforementioned Weather Channel. With more than 80 channels, this package is a considerable bargain. And now, just in time for the NFL season, DirecTV Now’s Just Right package (and thus above it) include NFL Network.

This is where DirecTV Now starts to flex its channel muscles. The Go Big package is $65 per month and offers 100-plus channels, from MTV Classic to NBC Golf to BBC World News. The only service that comes close to this number of channels for the price is PS Vue, which offers more than 90 channels for $60 per month.

4) DirecTV Now Gotta Have It

With 120-plus channels for $85 per month, Gotta Have It is the biggest live streaming TV package available on the market, adding the Starz network and its affiliated channels, the horror- and exploitation-themed Chiller and El Ray networks and more.

DirecTV Now added cloud DVR in August 2018. All subscribers receive 20 free hours of recording space, and it works pretty much how you’d expect it to.

DirecTV Now allows users to go back three days to watch shows they missed the first time around. Until cloud DVR is introduced, this is an excellent way to keep up with shows when you’re out of the house during prime time. This feature doesn’t work on every network due to licensing issues, but you can see the complete list of Rewind channels right here before pulling the trigger.

We tested DirecTV Now on Roku and iOS in September 2017. On Roku, DirecTV Now was smooth and intuitive, with livestreams hitting around 720p and on-demand programming coming in at 1080p. The interface is a little slow, but the menus are easy to navigate. Finding what’s currently playing, jumping between on-demand content, and finding movies to watch is a breeze. On iOS, streams were typically about 480p, but on the iPhone SE, the picture was crisp and clear. In each case, we streamed on a 100MB internet connection. 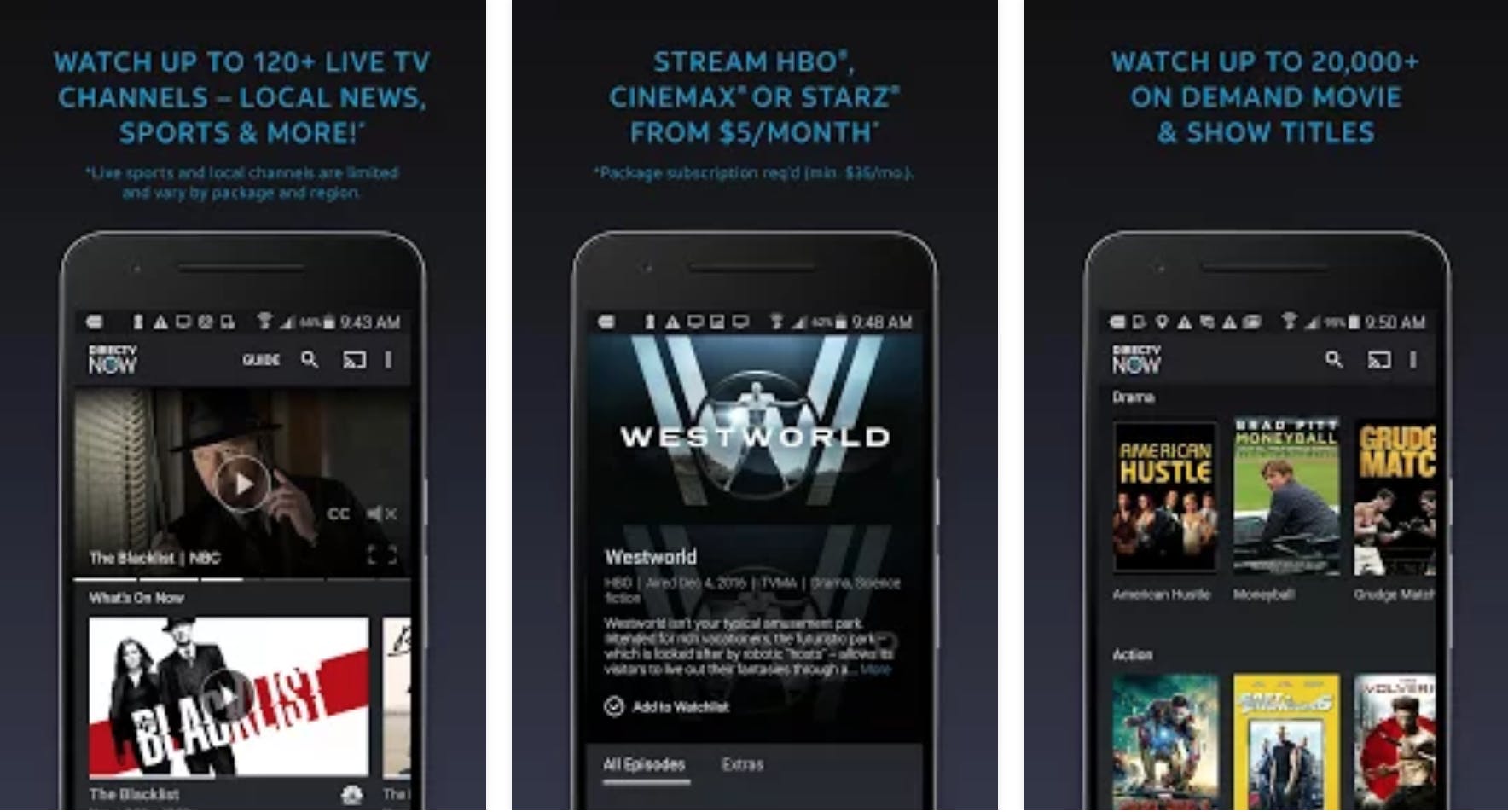 In regards to Sling TV, the current frontrunner in the market, DirecTV Now offers a better interface, but that’s just about the only leg it has up.That and the ability to watch HBO. Sling TV starts at just $25 per month, and you can customize your package significantly from there. It’s better for live sports, renting movies, and for finding more niche options.

Hulu with Live TV costs $44.99 for 50-plus channels that cover all of your basics for news, sports, and entertainment. But Hulu adds value by including access to its streaming service (albeit with limited commercials), meaning you can access its full library of movies,  TV shows, anime, documentaries, scary movies, and must-see Hulu originals. That alone tilts the conversation in its favor. In the world of live TV streaming, YouTube TV has become a major player in part because it’s so easy to share. You can add up to six people in your household, and each person gets access to unlimited DVR. YouTubeTV’s package costs $40, and it offers almost everything you’re likely looking for and some specialty sports options like NBA TV and MLB Network

Is DirecTV worth it?

If you were lucky enough to get in on DirecTV with one of its existing channel packages, it might be worth holding onto. While the recent price hike is a real kick in the shin, you’re still getting a ton of channels, no matter which tier you’re using.

But if you’re weighing DirecTV Now Plus or DirecTV Now Max, don’t bother. There are plenty of other options out there.

Editor’s note: This article has been updated to reflect changes to DirecTV Now’s streaming offerings.