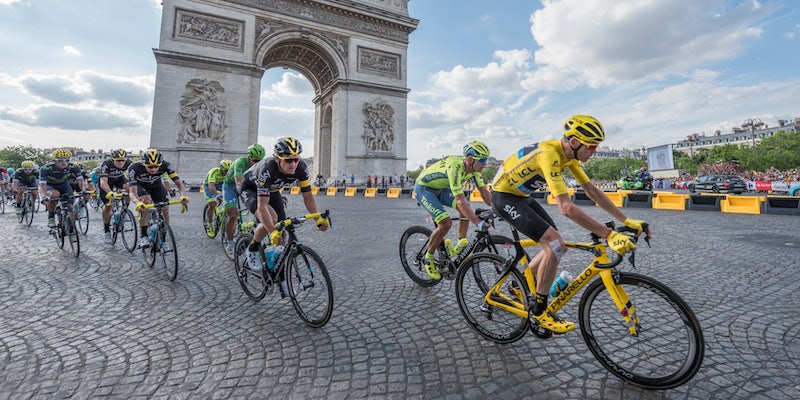 The Tour de France starts August 29 and runs through September 20. Here's how to catch it all.

The 2020 Tour de France is nearly complete, finishing Sunday in Paris. A Tour de France live stream will bring you one of the sports world’s most engaging events.

What is the Tour de France?

Started in 1903, the most recognizable race in cycling follows the formula of other European races in France’s diverse terrain. Lately, Team Ineos (Team Sky up until the 2019 race) has been the Tour’s dominant force, capturing seven of the last eight titles. Egan Bernal won last year’s race.

What channel is the Tour de France on?

To stream Tour de France action, you’ll want NBCSN or NBC Sports Gold (or both). There’s also one weekend you’ll need to switch over to CNBC.

How long does the race last?

2020 Tour de France TV schedule: What time does it start each day?

Each of the following services carries NBCSN, which will carry much of the action. If you want the best Tour de France live stream experience, though, you should spring for NBC Sports Gold‘s Cycling Pass.

If you’re looking for a streamlined, cost-effective streaming package, check out Sling TV. It offers two basic cable packages, Sling Orange and Sling Blue, each of which costs $30 per month. There’s also the third option of getting Sling Orange + Blue for just $45 per month. You’ll get more Sling TV channels by choosing Sling Blue, with its 40 channels including sports favorites like FS1 and NBCSN and cable mainstays like Food Network and Discovery Channel. But Sling Orange brings must-haves Disney Channel and ESPN as part of its package. There’s also a Sports Extra option for each Sling package, with MLB Network, NBA TV, and NHL Network part of each plan.

The Fubo channel list still includes plenty of sports, including the Fubo Sports Network, which has original programming mixing sports and humor. Fubo added the ESPN suite of channels in an agreement that also brought ABC and the Disney Channel. Pretty much every sports channel you could think of is available through Fubo, including NBCSN, BeIN Sports, CBS Sports Network, and TUDN.

At its most basic Plus tier, you can find sports staples like ESPN, ESPN2, and FS1. Considering that AT&TV TV Now plans include the loaded Ultimate and Premier tiers, as well as the Spanish-language Optimo Mas package, you can find whatever sports channel you’re seeking in at least one of the AT&T TV Now plans. Even at the Plus level, NBCSN’s there for you.

It’s a great option for sports fans. It comes with ESPN, ESPN2, FS1, FS2, and NBCSN at the ready. Deeper sports cuts, like NBA TV, MLB Network, CBS Sports Network, and ESPNU are also part of the YouTube TV plan.

Each team has eight riders; the nationality with the team name refers to the organizers or sponsors ll of the teams boast a multinational ridership.