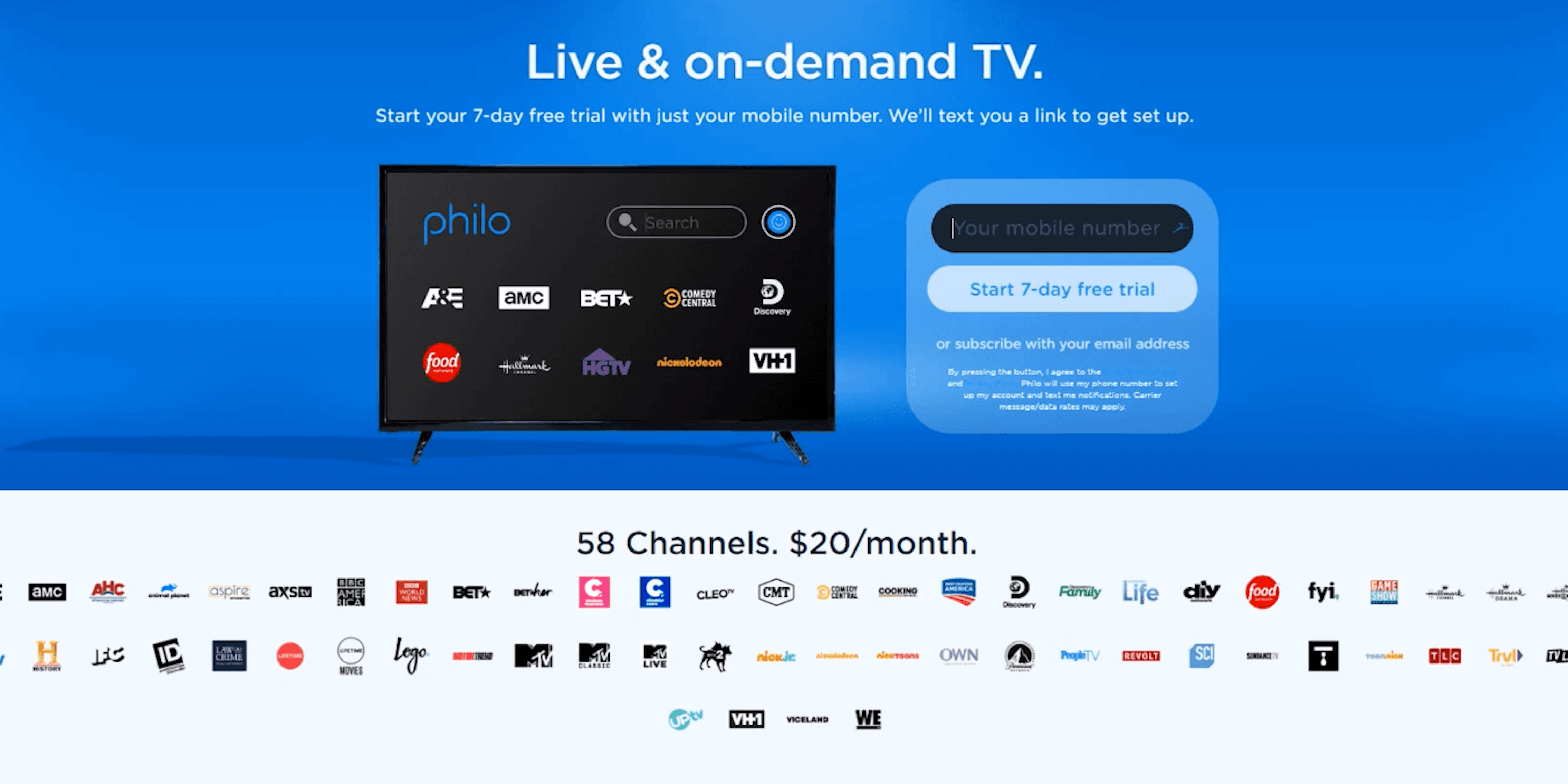 Philo TV channels: The complete list of channels and add-ons

You're going to need a workaround.

Philo is an incredible cord-cutting service. For just $20 per month, you gain access to a world-class package of today’s best streaming TV channels. It’s like basic cable if you didn’t have to pay for ESPN and cable news. With over 60 channels on Philo to choose from, the entertainment options never stop.

Want more than just the basic package? Philo lets you add on movie channels for a small fee. It doesn’t come with local channels, that’s an easy enough problem to solve. Why we’ll even solve it for you a little later in this article.

Before you sign up for a subscription, learn a little about what’s coming your way. Here’s everything you need to know about what channels are on Philo TV, how to catch your local shows, and what add-ons are available.

What channels are on Philo?

How many Philo channels are there?

Philo keeps its business model simple by only offering one package. Everyone gets the same basic 64 channels for just $20 per month. Taking a quick look at the channel listing above you’re going to notice a few things.

Firstly, Philo’s channels focus overwhelmingly on entertainment. You get four kinds of MTV but not traditional news. Comedy Central, but no CSPAN. However, that doesn’t mean this is a shallow package. There are a host of educational options such as Discovery, Destination America, Crime + Investigation, and more.

Secondly, while Philo started as a college-based streaming TV service, its lineup has aged with it. If you’re not interested in VH1 there are aware winning choices like Sundance TV, TLC, Hallmark, and Animal Planet waiting for you. We particularly appreciate the inclusion of the Food Network.

Finally, while Philo is lacking news options, they’ve expanded in recent years. Now, along with BBC World News, you get Chedder, Newsy, and AccuWeather Network. It won’t replace cable news but compared to where the service was a year ago it’s growth.

Does Philo have local channels?

Long story short, you can’t watch local channels on Philo. In spite of understandable user interest, adding local channels would drive up the cost of Philo. Don’t let this be a deal-breaker. We’ll explain our favorite workarounds in a minute.

What add-ons are available on Philo?

While the channels on Philo are packed with entertainment, they don’t offer much in the way of premium movie channels. Thankfully you can add two of today’s best, Epix and Starz, for just a little more money. Here’s how much each service costs for subscribers.

Each add-on brings multiple channels of live-streaming movies to your Philo account.

Epix subscribers get not just Expix, but Epix Hits and Epix 2. Meanwhile signing up for Starz gives you Starz, Starz Encore, and Startz Kids and Family. Each is a cheap way to augment your already impressive collection of Philo channels.

So how can I watch local channels on Philo?

Depending on the device you’re using to stream Philo, there are a couple of different ways you can get local channels.

1) Get an HDTV antenna

Most models can be had for under $30 on sale, but if you’re looking to spend more money, more expensive editions exist. (Here are our picks for the best HD antennas.) I tested a $28 digital antenna from Amazon and was able to pick up all of my local channels with a crystal-clear picture. Plus, with an HD TV antenna, you only have to pay for local channels once.

Most major networks allow you to watch their most recent programming through apps. A few, like CBS, have their own Netflix-like streaming services featuring their broadcast programming along with exclusive shows.

CBS All Access, for example, has every CBS Show, but it’s also the only place to watch the latest Star Trek series. CBS All-Access costs $5.99 per month (or $9.99 commercial-free) after a 7-day free trial and includes a live stream of CBS.

The only downside of using these services is the lack of support for local news. Thankfully, there’s a way around that.

3) Stream for free on network websites

Many networks let you stream recent episodes directly from their websites. There’s just one downside: waiting. Networks like CBS and Fox make you wait a few days, and occasionally up to a week, to watch their latest episodes. Still, it beats paying. Here’s a list of where you can watch:

As national media companies focus on an ever-dwindling number of stories, local news serves an important purpose in America. It’s where you can find out what’s going on in your hometown and local government, with the added bonus of local broadcasters.

If you can’t pick up your local station over the air, try visiting their website. Many local news organizations feature their local reporting live on their site. Most of these over-the-air channels don’t require you to log in with a cable provider.

5) Roku users can watch local news on the NewsON app

Roku users looking to catch their local news fix should make space on their device for NewsON, a free streaming service that collects local news programs from around the country.

This service has proven useful for keeping up to date with what’s going on back home whenever I travel. Roku has many well-known strengths, but free local news from anywhere in America is one of its unsung treasures.