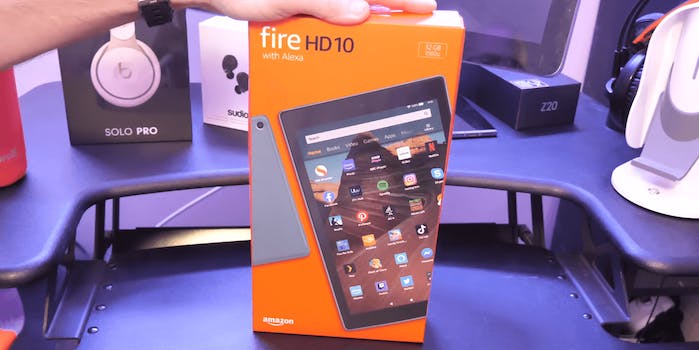 You have plenty of entertainment options.

Amazon’s Fire streaming devices could easily just offer the full-featured Prime Video service and call it a day. However, like its competition at Roku, Amazon knows today’s streaming audience demands more. The Amazon Fire app store is packed with streaming services and games for your entertainment. You don’t even have to give Amazon a dime to use them. Here are the best Amazon Fire channels.

Sling TV is a solid budget-priced streaming TV replacement, giving users ESPN, Comedy Central, MSNBC, Food Network, and more for just $30 per month. Users pick between two-channel packages, Sling Blue or Sling Orange, or can spring for both for $45 per month. There are no long-term contracts, and you can add features like DVR for an added fee each month.

Keep up with all your favorite shows after cutting the cord with Hulu. For the low cost of $5.99 per month, you get access to streams of cable and network TV shows the day after they air. Subscribers also get thousands of movies and original series on-demand. Getting used to ads during streaming takes getting used to, but for the cost, Hulu is one of the best deals in streaming. (You can also upgrade to Hulu with No Commercials for an extra $6 per month.) You can even add a live TV streaming TV with the game-changing Hulu with Live TV.

Home Box Office was the gold standard in premium movie channels on cable, and they’ve protected that reputation in the streaming world. HBO offers the best movies right out of theaters, incredible original series, and award-winning documentaries. For movie lovers, HBO has been adding more 80s and 90s films to its streaming library. Comedy fans can look forward to watching the massive back catalog of classic comedy material they’ve added as well. HBO earns your $15 a month.

If you use Amazon Fire channels, HBO Now is your only option. However, that doesn’t mean you can’t have HBO Max on your Fire device. Users who want to use HBO Max will need to download the HBO Max app from the app store.

Amazon Fire’s streaming devices also double as a gaming console. While you can’t play something like Grand Theft Auto, the system has a few hidden gems. The Jackbox Party Pack comes with five party games that your friends can play on their phones. From the trivia of You Don’t Know Jack to the bizarro Pictionary riff Drawful, these games are fast and fun. Best of all, you don’t need to buy controllers to play since everyone probably already has a smartphone that can connect to the game.

Don’t have a home stereo that connects to your phone? Spotify for Amazon Fire is a handy way to stream your favorite music when you don’t have Bluetooth or an auxiliary cable. Play your favorite songs or albums right from your TV and control it all on your smartphone, thanks to the Spotify app.

Miss streaming TV but don’t want to pay for it? Pluto TV is here with a deal that seems impossible. Made up of over 100 niche channels, Pluto TV offers viewers everything from sports to B-horror for absolutely nothing. There are news channels, more movies than you could ever watch, and even on-demand content. The catch is these channels are all digital, so that you won’t get cable options like ESPN. Still, it’s free, with a surprising number of bi- name movies and shows available.

Starz is the unsung hero of premium movie channels. Since it folded Encore into its streaming, the service has added hundreds of classic movies from the ’40s through the ’70s. In a time where you can count the classics on Netflix with one hand, that’s a gift to movie fans. At any given moment, Starz is streaming more movies, and more kinds of movies, than any of its peers. Add to that its great original series, and Starz is worth a free trial at the very least.

Showtime has spent the last decade rebuilding its image, going from a B-grade HBO to the house that Dexter built. Its original series, from Weeds and Shameless to Nurse Jackie and Homeland, are worth subscribing on there own. On top of its award-winning original programming, Showtime is still home to a host of classic films and new releases. Rather than focusing on blockbusters, Showtime tends to pick thrillers, dramas, and indie hits. If you’re looking for something more than explosions, try Showtime.

For sheer numbers of options available, no service, free or paid, beats YouTube. Now you can enjoy your favorite videos from the comfort of your sofa on your Amazon Fire device. Watch videos, subscribe to channels, and browse your personalized selections. The app is simple but effective, and best of all, it’s free. However, for the best experience upgrade to YouTube TV. Sure, at $64.99 per month it’s expensive, but its channel package is massive and it comes with unlimited DVR space for the whole family.

Kodi, the legendary streaming media server that no one exactly wants to officially support, is available for Amazon Fire devices. You won’t find it in the app store, but you can download it easily if you know how to look. We’ve provided a simple walkthrough for installing Kodi on Amazon Fire here.

Amazon Fire devices might not have the hundreds of free streaming media apps that Roku does, but it does have one of the best. Popcornflix is an ad-supported free movie service, featuring a mix of big-name movies like David Fincher’s Zodiac and classic hidden gems. The library is licensed from actual film studios, so while the movies might sometimes be obscure, there’s more to watch here than just B-grade crap. Give it a serious look and you’ll find a wealth of hidden surprises for free.

Sony’s Crackle service is easily the biggest of the ad-supported free streaming services and the only one that has original series. From movies like Joe Dirt 2 to its original series based on Guy Richie’s Snatch, Crackle has fought to set itself apart from the streaming pack. Since it was purchased by Sony, the service’s movie selection has improved, and it’s the only place other than Hulu you can stream Seinfeld. I wish the ads weren’t so loud, but Crackle is a must-try app. (Here are the best movies on Crackle to help you get started.)

If you love horror, you need to have Shudder in your life. This budget-priced subscription streaming service delivers hundreds of classic horror and suspense movies every month. Shudder lets you find the next generation of classics like Mandy and Found Footage 3D alongside all the Hitchcock and Argento you could ever want. With the recent addition of podcasts and new TV shows to stream, you never have to stop the nightmares. If only all streaming services were as lovingly curated as Shudder.