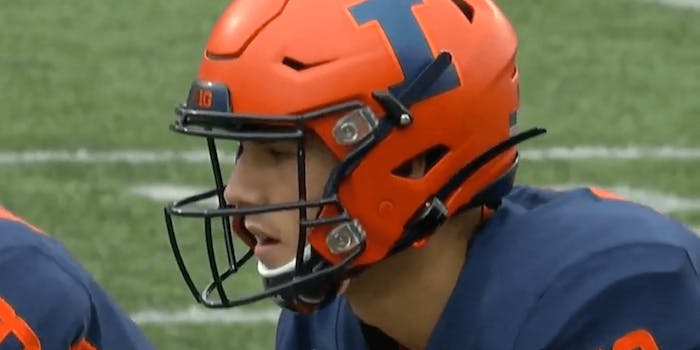 How to stream the Redbox Bowl live

Illinois and California are playing in the Redbox Bowl matchup, though that's not what the official game T-shirts said.

Representing the Pac-12 Conference, the California Golden Bears (7-5) make the short trip from Berkeley to Santa Clara to take on Big 10 delegate Illinois Fighting Illini (6-6), at Levi’s Stadium, in the Redbox Bowl.

Usually, we’d talk about stats and players that would affect the game in this part of the preview. But we need to talk about T-shirts. Namely, the Redbox Bowl official game T-shirts.

Do you see the issue? The initial, and official, design for the Redbox Bowl game shirts from the people in charge of the game read “Cal State” versus Illinois. The University of California at Berkeley has always either been University of California, Berkeley, UC Berkeley, or simply Cal. Cal State isn’t only another school, it’s a whole other state school system, with no team going by just “Cal State” in FBS or (formerly) Division I football. All other schools within their system go by the city name where a campus is located, with “State” following, e.g. Fresno State.

UPDATE: we officially rejected this design. It was released without our approval. The University of California, Berkeley Athletics Department either goes by Cal or California, period. Despite this mishap, we look forward to taking on the Redbirds on Alcatraz later this month. 😉 https://t.co/h7bOoffYxr pic.twitter.com/zyTY3uy93Q

To make matters worse somehow–on the same shirt–they also used an outdated helmet design for Illinois. It’s been two seasons since the program had helmets using the white “I” decal, and currently have a navy blue “I.”

Here’s how to watch the Redbox Bowl.

How to stream California vs. Illinois live: Watch the Redbox Bowl

The following services offer a one-week trial and a chance to watch lots of college bowl action.

Sling TV provides two base channel package options, each priced at $30 per month. Sling Orange includes three ESPN channels, while Sling Blue includes sports channels like NFL Network and NBCSN, as well and local channels. (Sling Blue customers in select markets get NBC; see if yours has it here. Sling Blue also brings Fox News Channel, MSNBC, and Headline News as part of its regular slate of channels, with Fox Business Channel available for those who get the Sling Blue News Extra add-on.

Spanish-speaking viewers have quite a few options. For bilingual families, you might consider the Español: Best of Spanish TV package for either Sling Orange or Sling Blue for 24/7 specialty channel LaLiga TV and beIN SPORTS Connect: Channels 4-9, which features matches from La Liga, Ligue 1 and Copa del Rey, among others. Both packages cost $5 per month after your free trial. Sling TV Latino is another Spanish-language package for $35 per month, including NBC Universo, History en Español, and—of import to soccer fans—four beIN SPORTS channels. (And choosing Best of Spanish + Sling Orange for $35 per month gives you access to ESPN Deportes.) For more information, check out our guide to Sling TV channels and our Sling TV review.

T-shirts aside, there is going to be a game.

The Fighting Illini is in the program’s first bowl game since 2014, and the first in Lovie Smith’s tenure. Illinois earned its best win in probably a decade after upsetting Wisconsin 24-23 earlier this season. QB Brandon Peters leads the offense with 1,611 passing yards and 17 touchdown passes; however, he remains questionable to play with lingering concussion effects. Matt Robinson has been getting first-team reps in case Peters isn’t cleared in time to play.