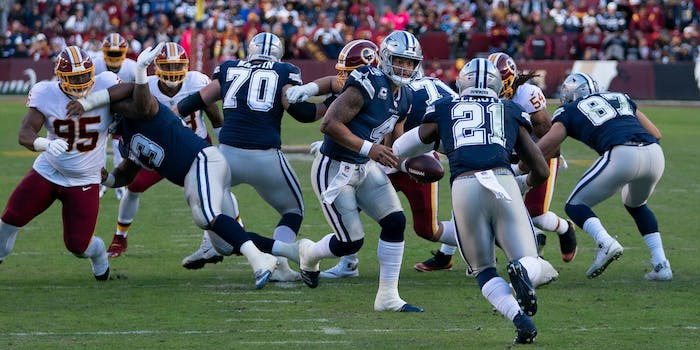 How to watch the NFL’s divisional playoff games for free

You won't want to miss these four games.

They’re finally here: the 2019 NFL divisional playoff games. Whether you’re looking for the Colts vs. Chiefs, Cowboys vs. Rams, Chargers vs. Patriots, or Eagles vs. Saints, here’s everything you need to know to stream NFL playoff games today.

The 2019 NFL divisional playoff games are being broadcast on NBC, CBS, and FOX. While those channels are available on network television, if you’ve cut the cord or are hoping to watch from a smartphone or tablet, it can be tricky figuring out how to live stream the NFL playoff games today. While all of the major live TV streaming services offer some collection of local channels, availability varies drastically depending on the service and your location. That’s why we’ve included links below for you to easily check what channels you’ll receive with each service. No matter which provider you choose, you’ll start with a one-week trial, so you can watch the 2019 NFL divisional playoffs for free.

Sling TV is your cheapest option for watching the 2019 NFL divisional playoffs. When it comes to network channels, Sling TV only offers NBC and Fox as part of the Sling Blue and Sling Orange + Blue packages. You’ll want the latter, which costs $40 per month, if you want to get ESPN channels in addition to regional sports networks and FS1 and FS2. (Here’s a complete guide to Sling TV channels.)

FuboTV specifically caters to sports fans, as you’ll note by the abundance of sports channels in its basic lineup, which includes regional sports networks, Big Ten Network, BeIn Sports, and FS1 and FS2. It’s the best streaming service for international soccer and, with a standard package that includes access to all four major broadcast channels and NFL Network, it’s a solid choice for streaming NFL divisional playoff games, too. The major asterisk to FuboTV is that it doesn’t include ESPN, but you’ll get free three-day replay for games and 30 hours of cloud DVR storage. (Here’s the complete FuboTV channels list.)