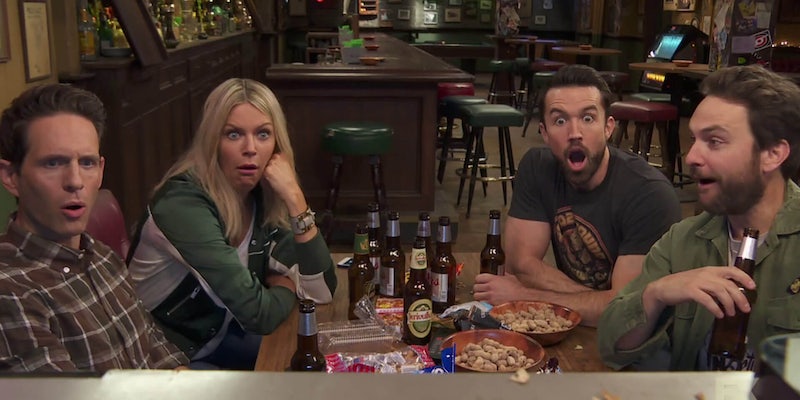 How to stream ‘It’s Always Sunny in Philadelphia’

Four. Teen. Seasons. It’s truly surprising that “The Gang” from It’s Always Sunny in Philadelphia is one, still alive, two, not incarcerated, and three, still going strong. And despite the fact that the show is entering its 14th season, it’s still one of TV’s most hilarious comedies, constantly pushing the bar and earning its long-time moniker of “Seinfeld on crack.”

What’s in store for season 14? Well, if episode titles are to be believed, the gang is going to “get romantic,” choke, text, and perhaps even “solve global warming.” They may even produce another sequel to Thundergun. In fact, the second episode of the season will feature the spoken of–but never seen– character of John Thundergun played to the nines by action movie legend and Rocky Balboa villain Dolph Lungren.

Here’s everything you need to know to stream It’s Always Sunny in Philadelphia online.

What is It’s Always Sunny in Philadelphia?

How to stream It’s Always Sunny in Philadelphia

It’s Always Sunny in Philadelphia on Hulu with Live TV

Hulu Live TV sets you up with local channels and has a broad spectrum of entertainment and sports channels to review, including the full suite of ESPN channels, Cartoon Network, HGTV, and even deep cuts like National Geographic and Syfy, and of course, FX, where you can stream It’s Always Sunny in Philadelphia and What We Do In the Shadows.

If you’re looking for a streamlined, cost-effective streaming package, check out Sling TV. It offers two basic cable packages, Sling Orange and Sling Blue, each of which costs $30 per month. There’s also the third option of getting Sling Orange + Blue for just $45 per month. You’ll get more Sling TV channels by choosing Sling Blue, with its 40 channels including sports favorites like FS1 and NBCSN and cable mainstays like Food Network and Discovery Channel. But Sling Orange brings must-haves Disney Channel and ESPN as part of its package. To gain access to It’s Always Sunny in Philadelphia, you’ll either need Sling Blue or Sling Orange + Blue. Sling also has a number of add-ons, including robust international packages organized by languages all over the globe.

To watch It’s Always Sunny in Philadelphia, you’ll want to dock in at the FuboTV Standard level.

Vidgo offers a package for under $40 a month that pulls together more than 60 English-language channels into its National English Package. Vidgo channels include ABC, Fox, the ESPN family of channels (including ESPN Deportes), and it’s one of the few streaming services that carries BeIN Sports. But it’s like Fubo in that, even though it started out for streaming sports, it carries a lot more now. You might be surprised to know that Vidgo’s an option to stream It’s Always Sunny in Philadelphia—and then you chat about it online via Vidgo’s Social TV platform.

If you’re already looking to AT&T for your wireless needs, you might consider AT&T TV Now to cover streaming for you. AT&T TV Now channels start with Plus and Max, which even include HBO. Then, AT&T plans expand from there, approaching cable selection and pricing with AT&T TV Now’s biggest packages. AT&T streaming also comes with Cloud DVR, letting you record up to 20 hours of TV per month. If you’re looking for It’s Always Sunny in Philadelphia, get in at the AT&T TV Now Plus tier to stream it.

If you’re looking for It’s Always Sunny in Philadelphia, know that you can stream it on YouTube TV.

Where to stream It’s Always Sunny in Philadelphia episodes

If you want to watch episodes of your favorite shows on the day after they air, there’s no better option than Hulu. All FX family shows are available on Hulu the night after they air, including Archer. The streaming service, which just slashed the cost of its ad-supported version to a mere $5.99 per month (or $59.99 a year), offers episodes of shows including Seinfeld, Family Guy, Golden Girls, and many other hits on-demand. There are also tons of celebrated original programming including Letterkenny, Veronica Mars, The Handmaid’s Tale, and PEn15. If you subscribe to Hulu Live TV, you’ll get the on-demand portion of Hulu included for free. You can also upgrade to Hulu with No Commercials for $11.99 per month.