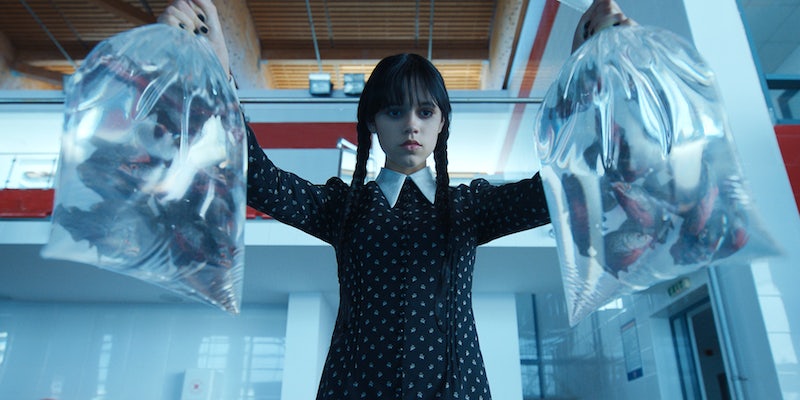 Jenna Ortega nails the role, but the show isn't creepy or kooky.

Netflix has seen massive success with Riverdale and original series The Chilling Adventures of Sabrina, and it’s fairly obvious the streamer is hoping new series Wednesday hits that same demo.

Despite the fact that Wednesday is supposed to be a fresh riff on Wednesday Addams, a character that has already been portrayed on TV and film, and it’s directed and executive produced by Tim Burton, the eight-episode series starts to look like every other Netflix YA show after a few episodes.

That’s no fault of Jenna Ortega, who nails the requisite deadpan while giving Wednesday a new energy. Ortega’s appearances in this year’s Scream reboot and Ti West’s X certainly expanded her fanbase, but Wednesday’s approach to horror is much more PG.

Showrunners ​​Alfred Gough and Miles Millar are drawing from their experience on Smallville, which followed teenage Clark Kent and explored his superhuman origins. But we get precious little time with Wednesday as she menaces bullies at her public high school; after a piranha incident, her parents, Gomez (Luis Guzmán) and Morticia (Catherine Zeta-Jones), abruptly send her to an elite school for outcasts like her, Nevermore Academy—the same school they attended. And she eventually discovers a clunky mystery involving her parents that she needs to solve, with the help of some burgeoning psychic abilities.

Turning it into another teen detective show is a misstep. It would have been nice to see Wednesday in her public high school environment a little longer, because once she gets to Nevermore, her classmates—werewolves, sirens—struggle to fit in just like she does. It all becomes one big wash of half-finished subplots and Wednesday’s narration, which is a big part of the series. Maybe too big. At one point she says, “And just like that,” and my eyes rolled so hard I thought I’d temporarily lost sight.

Thing, the family’s disembodied hand, plays a much bigger role here as it helps Wednesday with her detective work, which is complicated by a predictable love triangle with two characters who are basically interchangeable Netflix Love Interests.

The world of Wednesday is very immersive and looks very cool. It’s just that Wednesday—and, it must be said, Gwendoline Christie’s Principal Weems—are the only interesting things in it.